There must be something in the water over at KCTV5. Somehow—inexplicably—two former news anchors have gone on to win big on The Price Is Right’s infamous Showcase Showdown. The first was morning news anchor Dana Wright who won several years after she left the station to join KMBZ radio. And yesterday former weekend anchor Shaun Broyls cleaned up—winning over $40,000 in cash and prizes. Did it help they both worked for the CBS affiliate (where TPIR airs) and gained knowledge by osmosis? Just a coincidence? Fate? Kismet?

Whatever the case, we hear from Broyls who is now a well-known personal trainer in the L.A. area about what it’s like to win big on America’s favorite, longest running game show:

To hear my mom tell it, I have been a contestant on about “a gazillion” game shows. While she may be exaggerating just a bit, the list has been pretty cool: Hollywood Squares, Wheel of Fortune and Match Game just to name a few. However when I got the call to be on one of my favorite game shows of all time, The Price is Right, my excitement level was, well, at about a gazillion.

In 2020, game shows are now completely different due to the pandemic. Before we were even allowed to get on the CBS Television City lot in Los Angeles, all potential Price is Right contestants had to pass a COVID test. Also, usually at game show tapings you’ve got hundreds of people lined up ready to show the producers of the show why you deserve to be one of the contestants chosen. On this day, there were but 12. 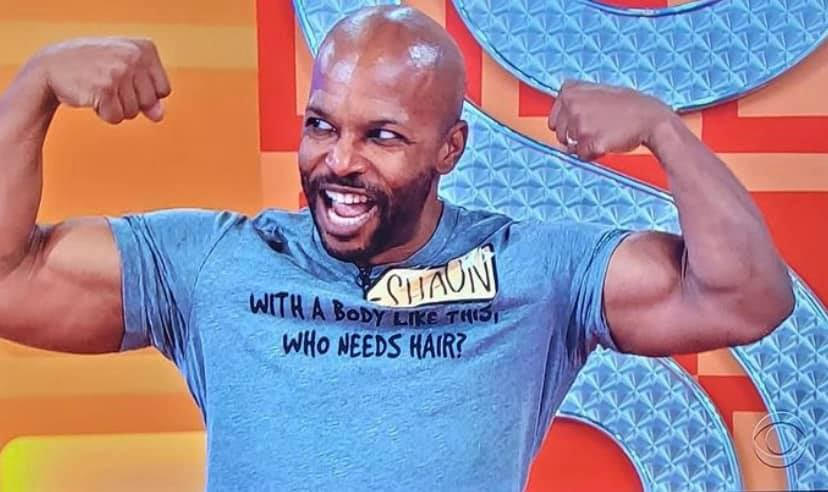 12 potential contestants. They say, “Come! On! Down!” to nine people per show. So I knew that if I brought my E-game, the odds were pretty good that I’d get on the show. (And, yes, I mean E-game for energy. If you want to get on a game show, you have to have the biggest energy this side of a 7-year old kid after a nap who just ate a bowl of Frosted Flakes and Red Bull.) So when the audition got to me, I started yodeling the theme from the little Mountain Climber game at the top of my lungs while mimicking hiking up Everest. That ended up being a smart move. 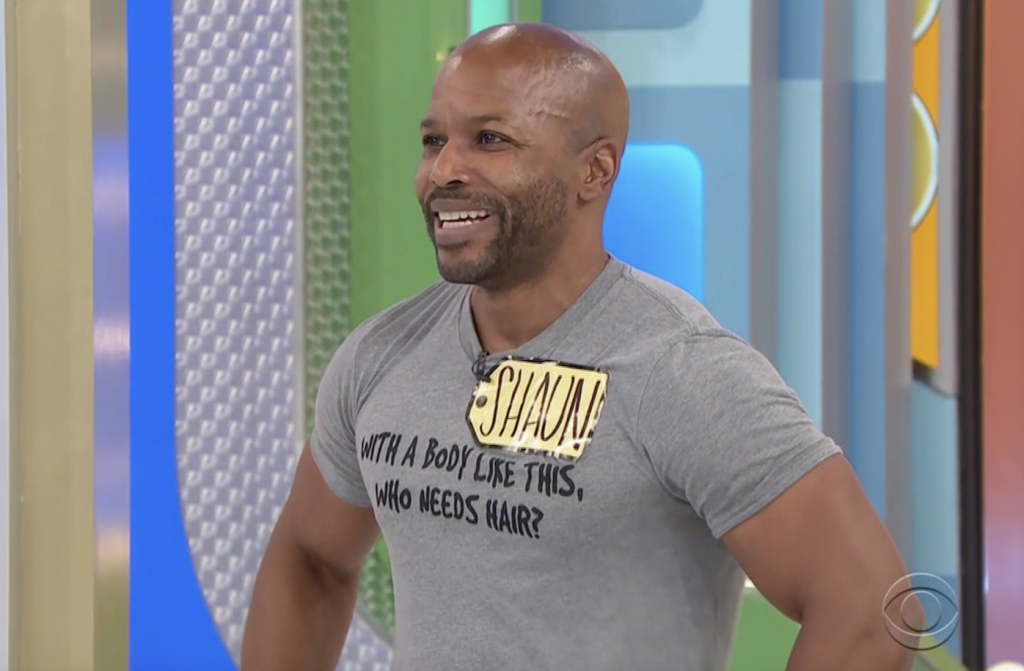 Without an audience anymore due to Covid, all of the potential contestants got mic’d up, masked up and stashed away in a hallway behind the stage. We had no idea if or when we’d be called, just to be ready. If we heard our name, we were directed to “whip your mask off and run out there!” I didn’t have to wait long. The very first name of the day was my own. The feeling of hearing my name called was about as surreal as it gets. I’ve watched this game since I was a little kid sitting next to my mom on the couch, and I’ve heard thousands of names called. Never in a gazillion years (told you I’d get that word in again), did I ever think one of those names would be my own. Now that it was here, I ran—ran!—out there to the stage. 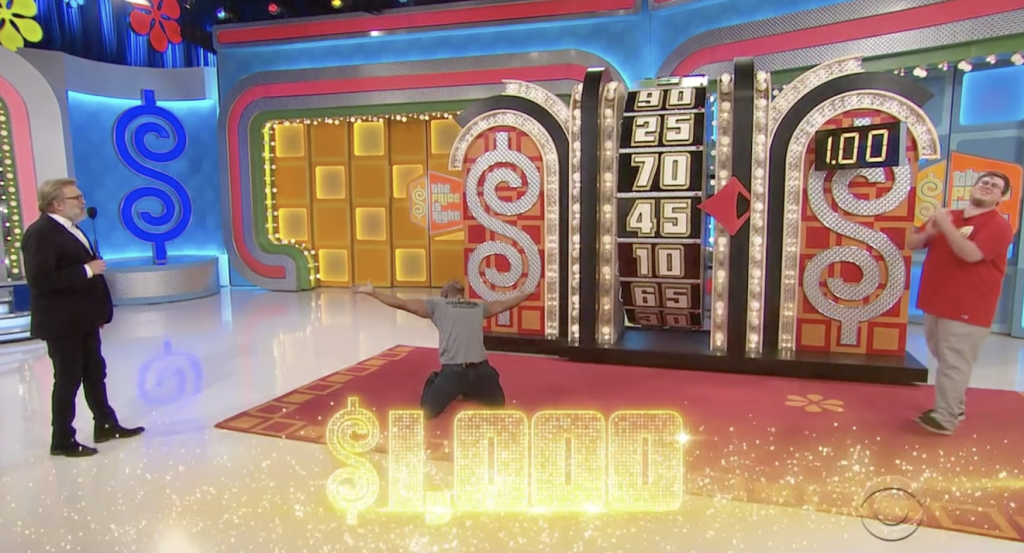 After that, everything afterwards is a blur. I was the winner of the first contestant bid and got to play the first game of the day. Drew Carey is a sweetheart. With no audience he just shoots the breeze with you to fill out the show and he genuinely seemed interested in everyone’s lives. After I won the first game, they sent me back to a small holding room where I got a chance to breathe and watch the rest of the show. When I got to the wheel, I couldn’t believe how heavy it was! All I knew was that I had to beat 90 cents, and so in two spins I accomplished another iconic moment. I scored $1—and an extra $1000! So then it was on to the Showcase Showdown. 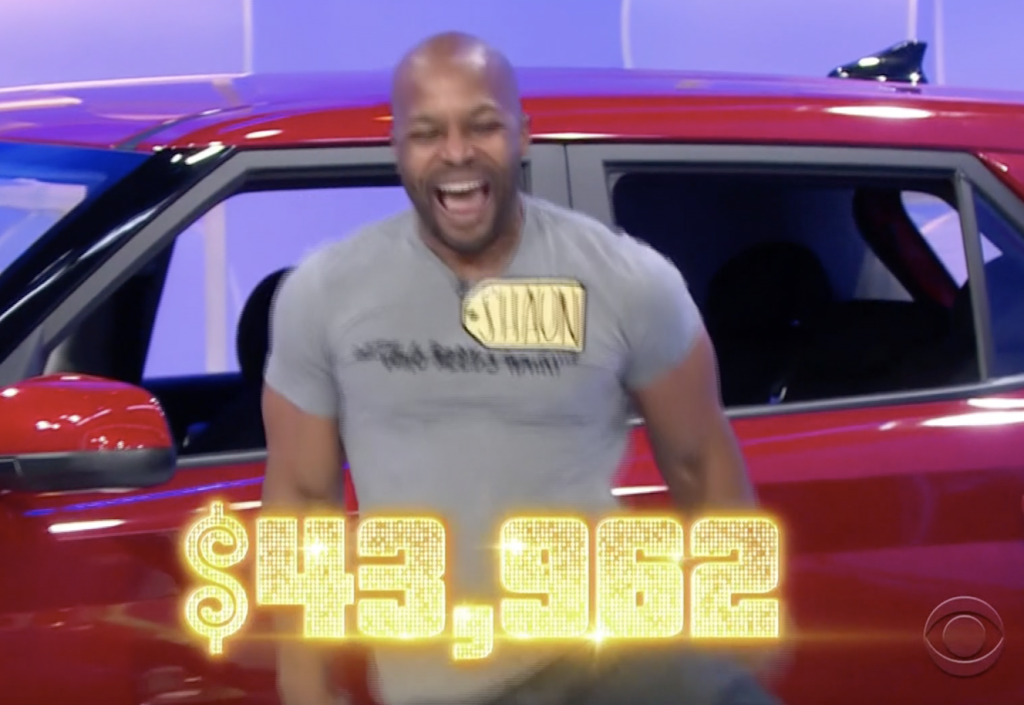 As I and the other finalist waited for the break to end, the producer came out and sternly warned us: “Do not overbid. The show dies if both people overbid!” So with that directive in mind, we both saw our prize packages, threw a safe number out there, and mine happened to be closest. I won it all and galloped like a confused antelope across the stage and over to my—wait for it!—brand new car. It was one of the most memorable moments of my life. I had just won The Price is Right. So I danced in front of the cameras like I forgot my joints are no longer 20 years old. In the end, I won a grand total of just over $43,000 in cash and prizes—and have cemented what probably is one of the weirdest game show legacies in Hollywood history.