A quick pick-up basketball game was just the ticket for Mark Thompson to get his sweat on. Thompson—who’s in his 50s—says he spends “a lot of time shooting baskets in the gym.”

But one fateful day, Thompson was just finishing up a strenuous full-court game when he took a shot but missed the basket. The next thing he remembers is being “awakened by Harrisonville paramedics” after suffering a heart attack.

Several nearby players saw Thompson collapse and immediately jumped in to help. It took three people doing continuous chest compressions on Thompson to keep him alive until paramedics could get there. Ironically, one of those people was a recent nursing graduate poised to start her career in healthcare the next day. Another was Myles Lemon, a lifeguard at the gym who had trained for just such an occurrence.

By the time the trio started chest compressions, Thompson was told he had “already started changing colors. I was unresponsive.” Things were starting to go from bad to worse to dire. “Myles ran to get the AED machine and after the first shock I was back to life.” 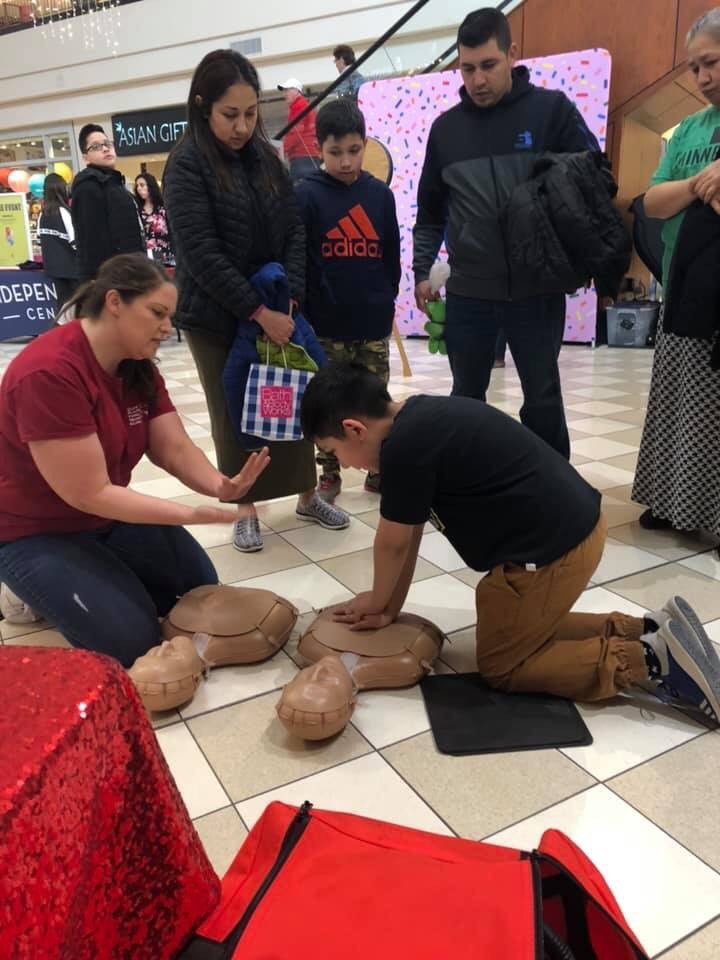 In a moment such as this, cooler heads prevailed. All three people working on Thompson knew what to do, including using Hands-Only CPR, which is recommended by the American Heart Association “for use by people who see a teen or adult suddenly collapse in an ‘out of hospital’ setting.” Think of it as CPR without mouth-to-mouth breaths.

There are two steps: 1. Call 911 2. Push hard and fast in the center of the chest. You don’t have to be certified to save a life. “Hands-Only CPR is easy to learn and by knowing it and doing it, you may save someone you love, or a stranger,” reports the American Heart Association.

For Thompson, the last thing he ever anticipated was that he would suffer a heart attack. “I stay in pretty good shape, but I was a junk-food junkie. I wasn’t obese—but I ate more candy than food. I had a double stoppage of my right coronary,” he says.

To hear Myles Lemon tell the story, he was definitely in the right place at the right time—despite being a bit tentative. “At first, I was really hesitant. Do I step in here? I thought, what good am I doing just standing here. I have the training,” he says. “Once I got into it—it was muscle memory. I just knew what to do. I would highly recommend getting training. I never thought I would have to use it and then I did.”

Lemon—who was just 15 at the time—says it was a team effort from both the nursing grad and a retired paramedic that helped keep Thompson alive. “I was trying to stay cool-headed and remember my training. That’s what that situation was for,” he says. “It’s a really surreal experience—it shakes you. You don’t even process it as it’s happening. Technically watching someone die was scary. The AED read no pulse and we all knew what we had to do—and do it right.” 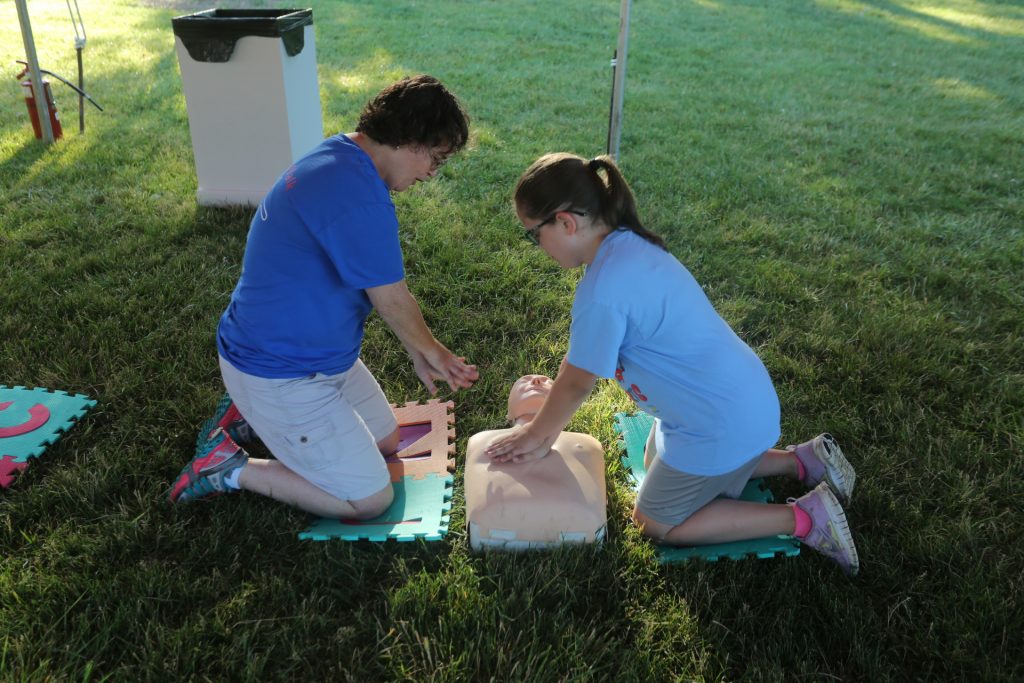 According to American Heart Association, the odds of surviving a heart attack aren’t the greatest. About 90% of those who suffer out-of-hospital cardiac arrest die. CPR, especially if performed immediately, can double or triple a cardiac arrest victim’s chance of survival. Thompson knows he’s lucky and says—in a concerted effort to get healthier—he’s changed his diet “a thousand percent. I was living life way too reckless—too much meat, too much barbecue. I was pretty thin so I ate whatever I wanted. I would eat three candy bars at a time instead of eating lunch or dinner.” Thompson’s new diet of salads, chicken, fruit, and veggies have helped him lose 12 pounds.

Less than a week after his heart attack, Thompson swung back by the gym to give some much needed kudos. “I went back to the basketball court to make the shot that I missed. Never leave the court on a miss,” he says. “That next Sunday and I met with the gang. There were a lot of them there—and a lot of people wondering what happened to that guy that was rushed out there. I gave them a little speech on watching what you eat.”

Lemon says he and Thompson “still play ball together occasionally.” But he says the experience still shakes him. “We both agreed we couldn’t sleep for a while after it happened,” he says. “I’m very proud of myself for stepping in at all. Afterwards I was shaking to the point where I couldn’t stand.”

Even though Lemon was CPR-trained thanks to his stint as a lifeguard and Boy Scout, he’s also become a huge advocate of ensuring younger kids also know CPR. Fortunately, the American Heart Association has successfully advocated for CPR as a graduation requirement. All students in Kansas and Missouri now learn CPR before they graduate. “I’ve been CPR-certified for eight months. You never know when you’re going to have to use it. But there I was—using it. Young people need to learn it—just to have in the back of your head,” Lemon says. “Get the training. Make it happen. In fact, you can learn Hands-Only CPR in just a few minutes on heart.org.”

Thompson, meanwhile, has a new lease on life. In fact, he even got the band back together—figuratively and literally. “I certainly got a second chance—no doubt about that,” he says. “I’m a bass player/guitar guy and I’m getting back with my band guys. I’m blessed all the way around right now. Everything is falling into place.” 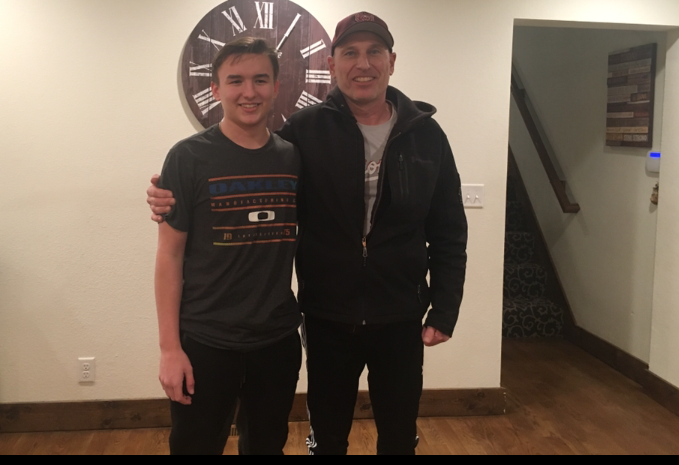 He’s forever indebted to the folks who saved his life—but especially to Lemon who went above and beyond the call of duty. “Let’s just say, I know when his birthday is,” Thompson says with a laugh. “It’s a wonder. He’s a great kid. I can’t thank him enough.”