With her Becco restaurant in New York, Eataly locations now in five major U.S. cities, a line of fine pastas and sauces, and a dozen-plus penned cookbooks, Lidia Bastianich is an Italian culinary forza.  Building upon the continued success of her eponymous Lidia’s Kansas City restaurant in the Crossroads’ historic Freight House, she visited Kansas City to both open a new pergola space for the restaurant’s 23rd anniversary and to launch her latest cookbook, Lidia’s A Pot, A Pan, And A Bowl.

The new Italian-style pergola was designed with a Midwest farmhouse sensibility. It includes an Ewerdt Hilgemann sculpture fabricated by Zahner and features heaters and all-weather curtains to accommodate our sometimes-erratic Midwest weather. It’s a divine space for private events and gatherings.

Overheard: “Well, I’ve gotta hand it to him. No one tries harder to appear woke.”

As for the new cookbook, it is a collection of more that 100 recipes distilled to the essentials, requiring but a few ingredients and steps—and even fewer dirty dishes. It is also the companion cookbook to the upcoming television series, Lidia’s Kitchen: Home Cooking. With my fresh copy, I cannot wait to conquer the skillet lasagna and rollatini of sole.

Following the ribbon-cutting ceremony and cocktail reception, a private anniversary celebration dinner was held that featured items included in the new cookbook deliciously prepared by the executive chef, Cody Hogan.  Among them were mini meatloaves, ricotta gnudi, and chicken and eggplant parmigiana. We’re so fortunate to have a taste of Italy this close to home. Andiamo!

It was the perfect day for a block party. Held outdoors at Woodside Village in Westwood, the occasion was a dual celebration of Ulah’s 5th anniversary and the grand opening of its sister store, Luna.

For those unacquainted, Ulah is a men’s apparel and lifestyle store operated by Joey Mendez and Buck Wimberly.  The shop has been recognized both locally and nationally for its considered selection of products—clothing, shoes, jewelry, home, and personal care items—geared toward every kind of gentleman.  Offered brands include the likes of Scotch & Soda, Billy Reid, Run on clouds, Charlie Hustle and Made Mobb.

After five (occasionally grueling) years, the pair behind Ulah have now opened Luna, which you may have guessed, offers a similar retail feel and experience—translated for women.  Just two doors down from Ulah, block partiers like myself got a first peek at the new shop, overseen by Elise Alexander. The emphasis at Luna is undoubtedly clothing, but like Ulah, there are plenty of other accessorizing and gifting items to capture one’s attention. I was excited to see a variety of locally made Sierra Winter jewelry, whose natural, prairie-style motifs were a no-brainer for the Luna concept.

Overheard: “Aunt Sassy is reporting that her cat brooch is missing.”

Back outside, drinks were being poured to the beats of DJ Sheppa, and there were bites from Woodside neighbors, Blue Sushi Sake Grill and The Roasterie Café. Session salon flung its doors open to the crisp breeze, with business humming away inside, and massage therapists from Woodside Health Club (coincidentally, my primary massage spa of choice) performed seated mini massages alfresco. Perfection.

Five years ago, I made my way through a decaying, decrepit building—sidestepping falling plaster, dodging rodents, and doing my overall best to be cautious in an unsafe and unstable environment.  Floor by floor, and finally via an attic ladder, we made our way to the rooftop and soaked in what I still remember being one of the most resplendent autumn days.  Perched atop a home (a mansion, more accurately) at the top of a hill, we could see the entire city and its surrounding tableau of warm fall colors. Thanks to Paul Gutiérrez, it was a magical gift to experience the “before.”  Years later, 22 million dollars, and hundreds of careful, restorative hands, Corinthian Hall at the Kansas City Museum has been revived to its original Beaux-Arts splendor. I arrived bright and early for a pre-opening glimpse of the finally completed project and was so happy that Fairway Creamery’s food truck was on hand for morning sustenance.

Hot Gossip: Whose bar opening’s guest list was a snooze-a-riffic blast from the past?

I grabbed a hot cup of coffee and a blueberry crumble donut and was on my way. I began my self-guided tour in the basement and eventually worked my way up the additional three floors. There I found a restored billiard room and the museum’s reinterpreted soda fountain, Elixir. Beginning early next year, museum patrons will be able to enjoy ice cream and phosphates here. Glass enclosures in the hallway thoughtfully reveal the home’s original Otis commercial elevator—the first of its kind installed in a private residence west of the Mississippi.

On the ground level, a variety of salons and living spaces now host various exhibits and collections currently devoted to the building’s history—which, itself is impressive.  Robert Alexander Long, a lumber baron who got his start in Columbus, Kansas, built not only the largest lumber company at the time (later merged with International Paper Co.), but also the 1909 70-room, 35,000 sq. ft. stone mansion occupying three acres facing North Terrace Park.  The home was designed by architect Henry Hoit (you may recognize similarities with another of his notable home designs at 55th & Ward Parkway).  The grand salon, designed in the Louis XVI style, is now home to the most incredible porcelain blossoming overhead light sculpture by Linda Lighton, as well as items collected by the Long family on their six-month grand tour of Europe to collect art and furnishings for the home.

Also on the ground floor are Wisteria, a boutique featuring home, clothes, and accessory items, many created by local artists and designers; and Café at 3218, which will initially offer culinary programming, including cooking demonstrations and classes, and ultimately a full-service museum café. 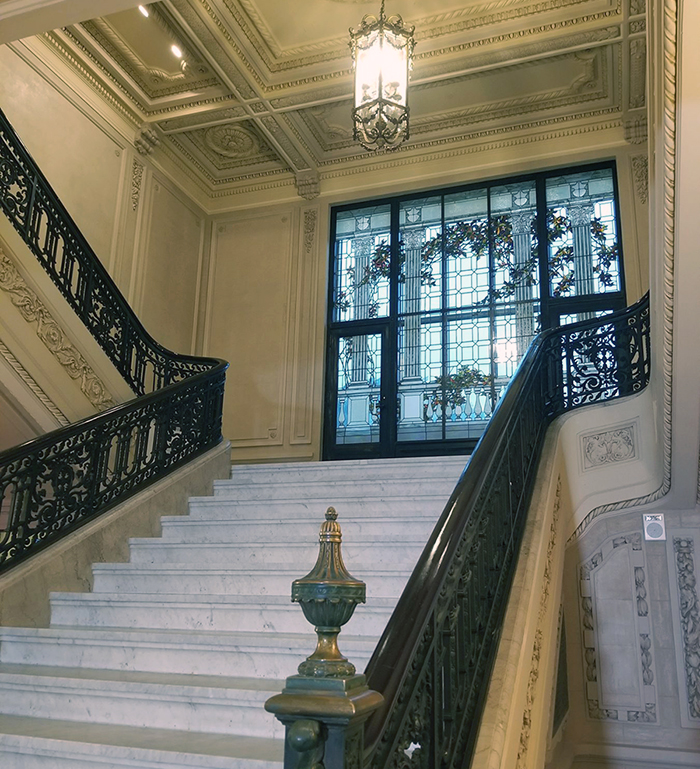 Ascending the colossal marble split staircase—where the landing once held a pipe organ punctually played by Long’s valet at breakfast and twilight—will take you to the second floor, where five exhibition galleries showcase rotating historical materials from the Museum’s more than 100,000-piece permanent collection. There is additional dedicated space for school programming and community meetings.

The third floor is occupied by an additional three galleries (one currently with an interesting exhibit dedicated to the El Torreon Ballroom, including its original mirror ball) and the JE Dunn auditorium and theater.

Overheard: “Leave the coat. Men will surround you for warmth.”

This entire project has been a brave and bold act of preservation. At every turn, I was impressed, surprised, and delighted. From the painstaking reclamation of a treasured building and care given to adapting it to modern needs, to the incredible artworks, lighting, and ornate historical details throughout, it is something that everyone—everyone—needs to see.

I remember attending the first HomeComing event for SAVE Inc. Somehow, since then, ten years have slipped by. From Wonderland to a German speakeasy, and plenty of exotic locales in between, we’ve hopped from place to place in an effort to raise funds for permanent, transitional, and emergency assistance housing solutions for those experiencing homelessness.

This year, for its 10th anniversary spectacular, SAVE invited us to tropical Miami, combining beach life with the city’s speed racing culture. Guests were greeted by an Ocean Avenue-like succession of exotic cars leading to the rear of Studio Dan Meiners. A delivery truck garage door rolled up to reveal a pit crew’s shop and volunteer greeter (Katie Gilchrist) eager to remind of SAVE’s mission, as well as offer a welcome glass of champagne.

Through the palm trees, we entered a tropical paradise—alive with hula-hoopers, roller skaters, and baton throwers. Guests, eager to resume in-person conviviality, sipped on themed cocktails provided by Mike’s Liquor and City Barrel Brewery and Kitchen, noshed at the taco bar, competed in the Mario Kart race, and played a variety of games for wine or cash.  Dalton Qualien-Waters took home the top four-figure prize, and generously donated it right back to SAVE.

Blaine Proctor provided updates on SAVE’s work in the community, followed by dancing to DJ NE$$, interrupted only by a whimsical troupe of twirling umbrellas, strung with individually wrapped churros. Who doesn’t love a churro—and spending an evening with fun people coming together for a common community purpose?