The Women’s Big 12 Championship returns to Kansas City for the first time since 2012. And coinciding with that return, women will have the chance to pick the brains of female leaders from Big 12 universities—then watch the athletes take the court.

Felicia Martin, NCAA vice president of the eligibility center, says both the men’s and women’s tournaments returning to Kansas City brings an unparalleled fan experience. “If you support basketball, you know there is something incredibly unique about the women’s game,” says Martin, who will speak at a women’s mentoring panel during the Big 12.

Showcasing Career Opportunities
If people are not exposed to something, Martin says, they can’t choose it. So the combination of a leadership panel for women and the return of the women’s Big 12 will show women the career opportunities available both on and off the court—for example, women like ESPN host Maria Taylor.

The Lift As You Rise panel, slated for March 12, is intended to raise awareness of the return of the women’s event to Kansas City, according to Patti Phillips, CEO of Women Leaders in College Sports. “One of the challenges or opportunities right now is that the men have been here for years,” says Phillips, who will moderate the panel. “It’s an institution.” According to Phillips, it says a lot about Kansas City to be chosen to host both tournaments. “I think our city does a great job when word gets out,” she says.

Phillips says that Women Leaders in College Sports worked with WIN for KC to help secure the return of the women’s championship to the city, which is how the panel formed. In addition to Martin, the panel will feature Anne St. Peter, the founder of Global Prairie, and Kathleen Boyle Dalen, the chief talent, integration and culture officer at the Kauffman Foundation. 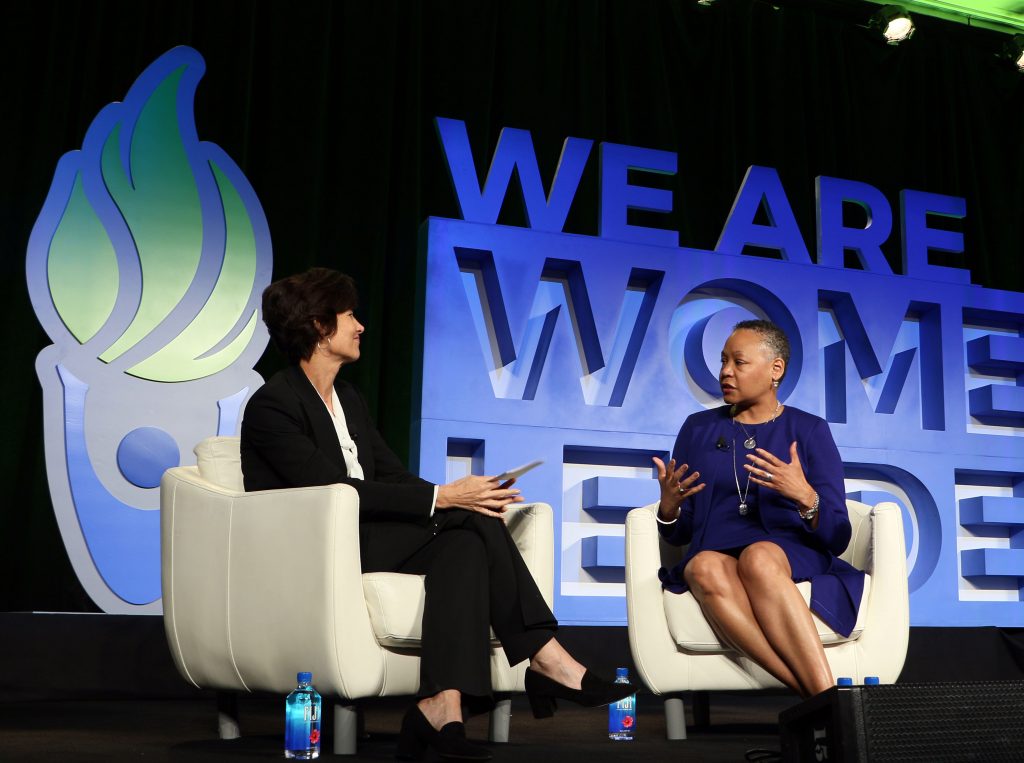 Phillips says that Women Leaders in College Sports is a broad leadership organization that frequently speaks about leadership through the lens of sports, but the panel intentionally features women from outside the sports industry. “Anne is on the panel because she’s a great leader,” she says. “She’s really known with the women business leaders in the community.”

“Creates Space and Opportunity”
Meanwhile, Kathleen Boyle Dalen says she is all for any opportunity to be involved with Women Leaders in College Sports. “I think having an event like this, specifically geared toward women, creates space and opportunity for women to have their voices fully at the table and be engaged.”

Martin—a big believer that representation matters—says it is important girls and women who are considering opportunities in the sports world and beyond see women in the roles they want to seek out. And being on the panel is Martin’s way of paying it forward. Turns out, Martin had an incredible opportunity at Texas Tech, where she supervised athletic academic services and cross country and track and field, which allowed her to relate and hear the stories of young people. “I know that that’s a role I’ve been gifted with,” Martin says.

Girl Power!
Girls ages 13 to 18 are invited to attend the panel, which will include a chance for attendees to engage with mentors prior to watching the women’s championship game. A female representative from a Big 12 school will be at each table at the event. As they promote the panel, Phillips says she hopes it will raise awareness that the women’s championship has returned. “Women’s basketball in the Big 12 is some of the best in the country,” she says.

For more information, or to purchase tickets, visit https://raceroster.com/events/2020/27826/lift-as-you-rise-women-building-confidence-in-leadership-presented-by-adventhealth. The panel is expected to last about 45 minutes.

Motivation? Inspiration? Life lessons? You’ll Find All This and More at the WIN For KC Women’s Sports Awards Celebration