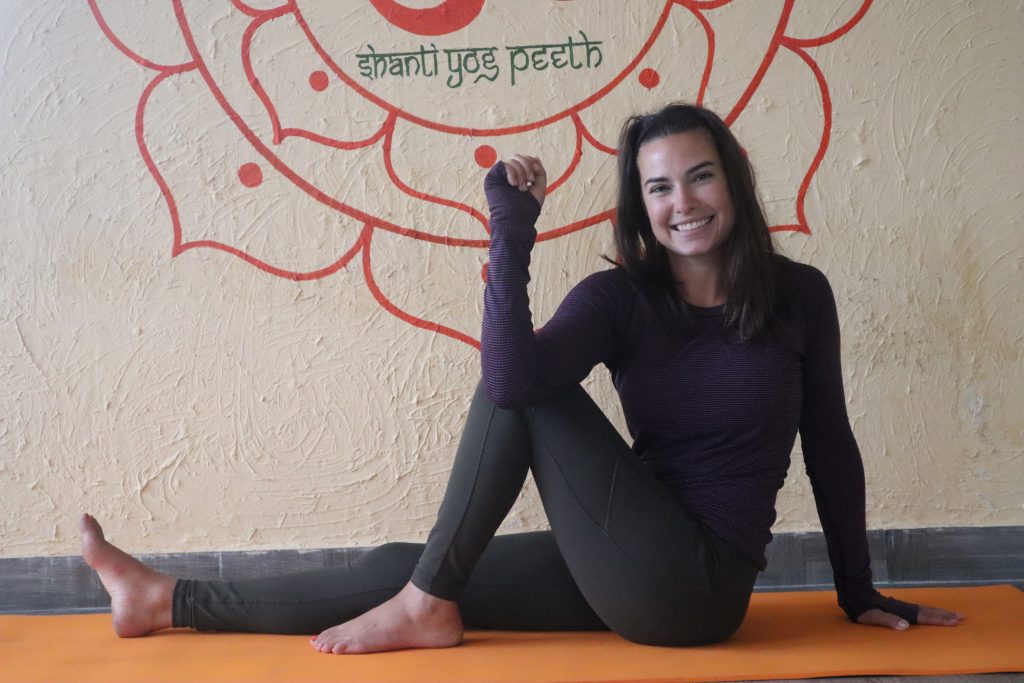 Since we last checked in, Kim and Mady have taken up temporary residency at Shanti Yog Peeth to learn all things yoga, on and off their mats. The girls have been reintroduced to much cooler weather (thanks to living in the Himalayas) and to a schedule—including a 5:30 a.m. wakeup call (even on Saturdays) and class until 7:30 p.m. Why commit to this?! They are still trying to figure that part out. 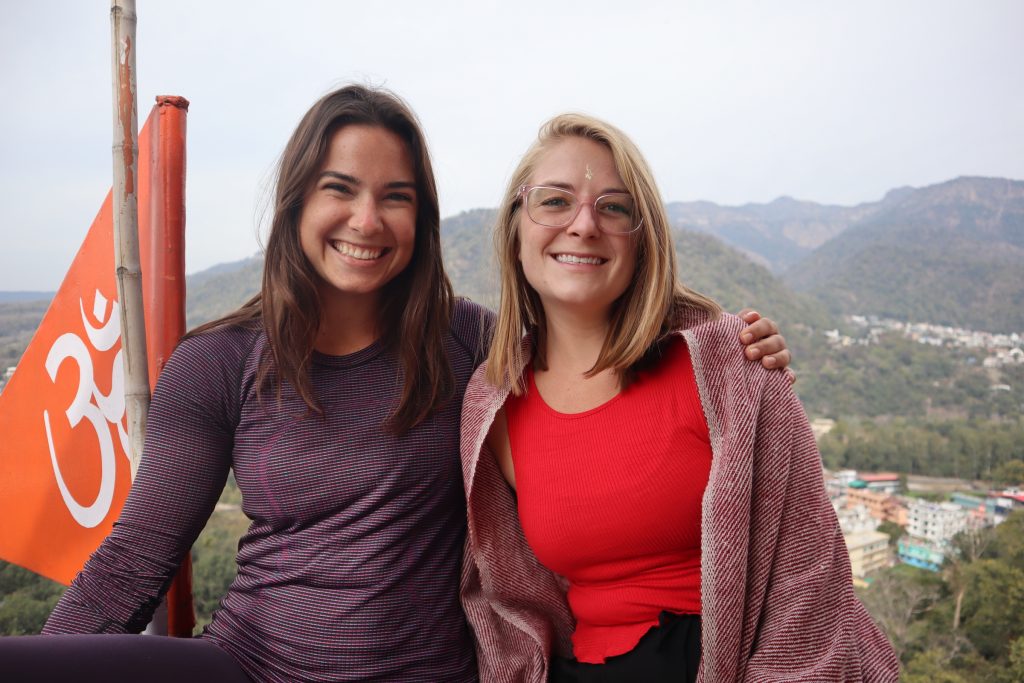 Mady: “Remember when we said we were chasing summer for 18 months? Plot twist. We’re currently living in the Himalayas during the dead of winter and it’s not exactly cozy. Especially when we have one long-sleeve shirt, there is no heater and we’ve been living in 80 to 90-degree weather for the past five months.

Our travel schedule opened up some time in February to take a yoga certification course. The plan was to start exploring India in March, but we got here a little earlier to knock out our training before starting to travel. This worked perfectly in terms of timing and geographically with our route, so we booked on a whim without doing much research. And by that, I mean we didn’t look at the weather at all. We didn’t even realize we would be in the Himalayas.

Within 48 hours of arriving, we each bought a pair of wool socks and thick scarves (multi-purposed as blankets). Did I mention it’s 50 degrees?”

Kim: “Day one of Pranayama class. Topic: nasal cleansing techniques. There are two we will be practicing every day: jal-neti, water cleansing (neti pot), and rubber-neti, nasal cleansing using a rubber string to “floss” your nostrils. Initial thought? This is insane! There is no way I’m going to floss my nostrils. The very next day I am flossing my nostrils. And a few days later I am on FaceTime showing my family my new skill. Thoughts today? My nostrils have never felt so alive.”

Currently in: Rishikesh, India
11.5 hours ahead of Kansas City (fun fact: India’s time difference is on the half hour)

Learn the Lingo:
Namaste: My energy respects your energy
Shanti: Peace
Om (Aum): Universal word for God
Mula Bandha: Area of your root chakra (anus to navel) and singlehandedly the topic/phase we’ve been hearing the most— “Now class engage/contract your mula bandha …” It’s a rule for yoga, a rule for life. 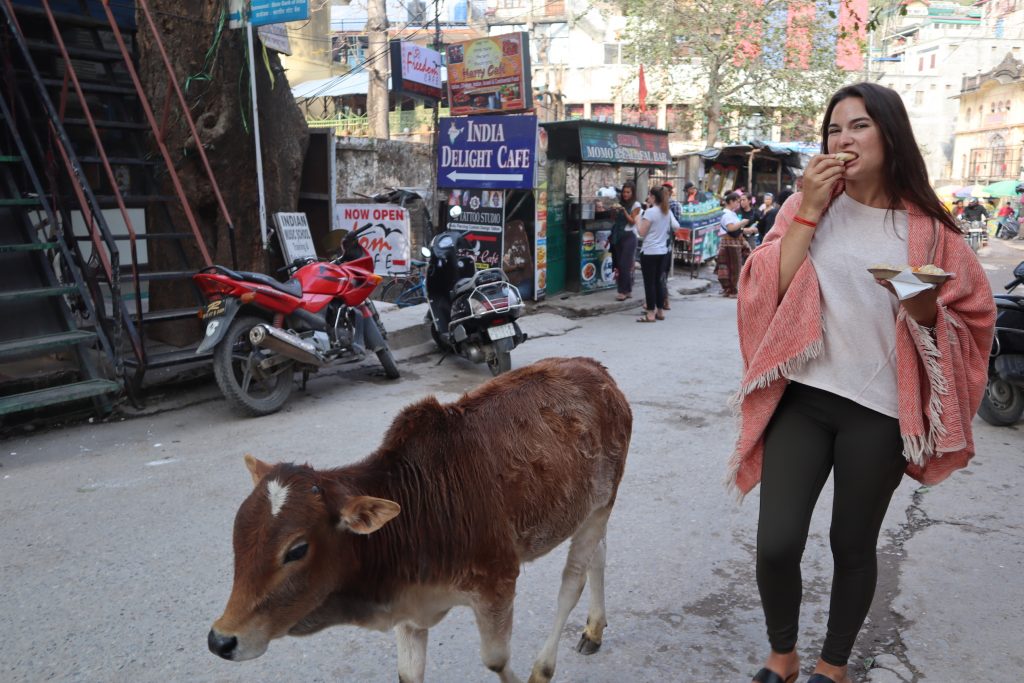 Mady: “Steamed dumplings stuffed with cabbage, carrots and onions and coated in chili sauce. And if you know us at all, layers on layers on layers of chili sauce. We had never eaten (or even heard of) momos before arriving in India and now I can’t believe how sad our lives have been for the last 25 years without them.” 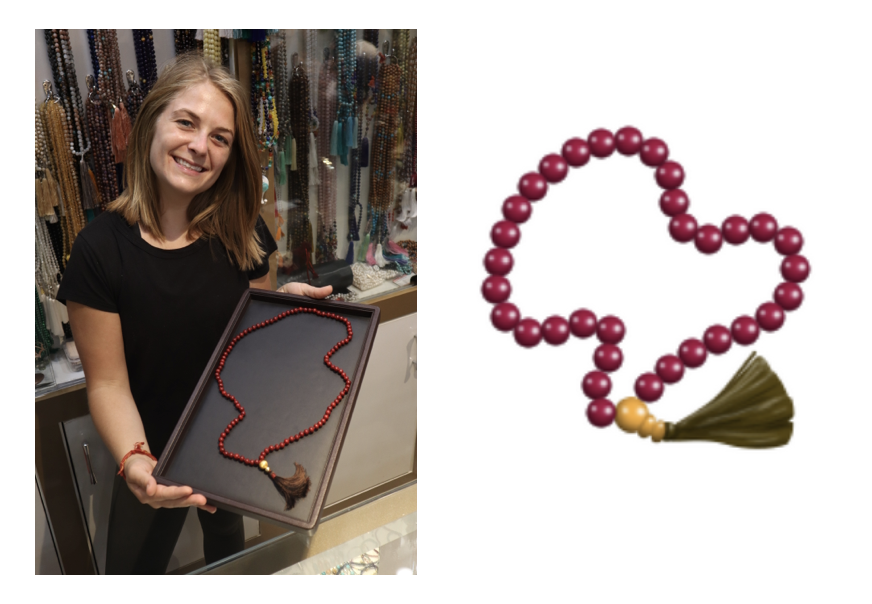 Kim: “Mala beads are a strand of 108 prayer beads used to count the number of times a mantra is recited or breaths while meditating. You may recognize mala beads from the miscellaneous emoji section on your smartphone. We were set on replicating this emoji exactly and who would’ve thought it would be so hard to replicate?! (Hint: not us). We spent five hours running around Rishikesh getting pieces from multiple shops to recreate these mala beads in real life.

Why were we so gung-ho on recreating this emoji? We’ve awakened our Sacral Plexus chakra, which means our creative juices are flowin’. Coming soon, we’ll have a new Instagram account to document our travels together. Stay tuned! (Yeah, yeah, we know we’re about six months behind.)”

Learn the Lay of the Land:
Rishikesh, India

Kim: “We land in Rishikesh, jump in a cab and Mady immediately asks where the best bars are in the area. Our driver proceeds to tell us that Rishikesh is an alcohol-free city, so none. And that’s how our accidental month of sobriety began. Being the yoga capital of the world means a place with little temptations or distraction—read that: no alcohol, no meat, and little traffic compared to the rest of India. To our surprise, there is actually a lot of traffic, but this comes in the form of stray dogs, cows, donkeys and wild monkeys!”

Mady: “From day one, it’s been important for Kim and me to use this time building tangible skills we can take home with us. We were planning to take a yoga certification course in Bali but changed plans quickly once we learned that it was half the price to do the same thing in India. The program we enrolled in offered a month of accommodation, three meals a day, certifications to teach Hatha and Ashtanga yoga, a massage, and weekly excursions around Rishikesh for $800. Not to mention, we get to learn in the yoga capital of the world. We did something the right way and it cost less. Don’t get too excited—this is the first time that’s happened on this trip.”

Wizard of Oz Tally: 76 (and counting)
“While we know Kansas City has a lot to offer, the majority of the world immediately affiliates us with one thing—The Wizard of Oz. We’re keeping a real-time tracker of all the Dorothy, Toto, and tornado references made to us along the way.”

Mady: “Our local Indian yoga teacher asked us where Kansas was and what it was like. A British classmate of ours chimed in and asked the teacher if he had ever seen the Wizard of Oz. Upon learning he hadn’t, our friend proceeds with ‘Oh, it’s a great historical documentary on Kansas. You should definitely watch it!’ This may be why nobody takes us seriously.”

Next up?
Mady: “We’re rounding up our month of Zen in Rishikesh and are going to start actually exploring India now. This country is massive, so there’s a million spots to hit and we can’t move fast enough. But what’s new?!

The next two weeks will be spent running around Rajasthan (northern state in India), knocking out seeing sunrise at the Taj Mahal, exploring Varanasi, where Indians go to be cremated and liberate their souls from the cycle of reincarnation, organizing a massive birthday party for Kim (first sober one she’s had in the past eight years) and celebrating Holi in the streets of Jaipur. Wish us luck!!”