Andrew Krivanek helps design massive buildings on a massive scale. Collegiate and professional sports venues are his jam. As an architect for Populous—a global architecture firm that specializes in designing venues that draw people together like stadiums, arenas, airports and convention centers—Krivanek knows that bigger is better. 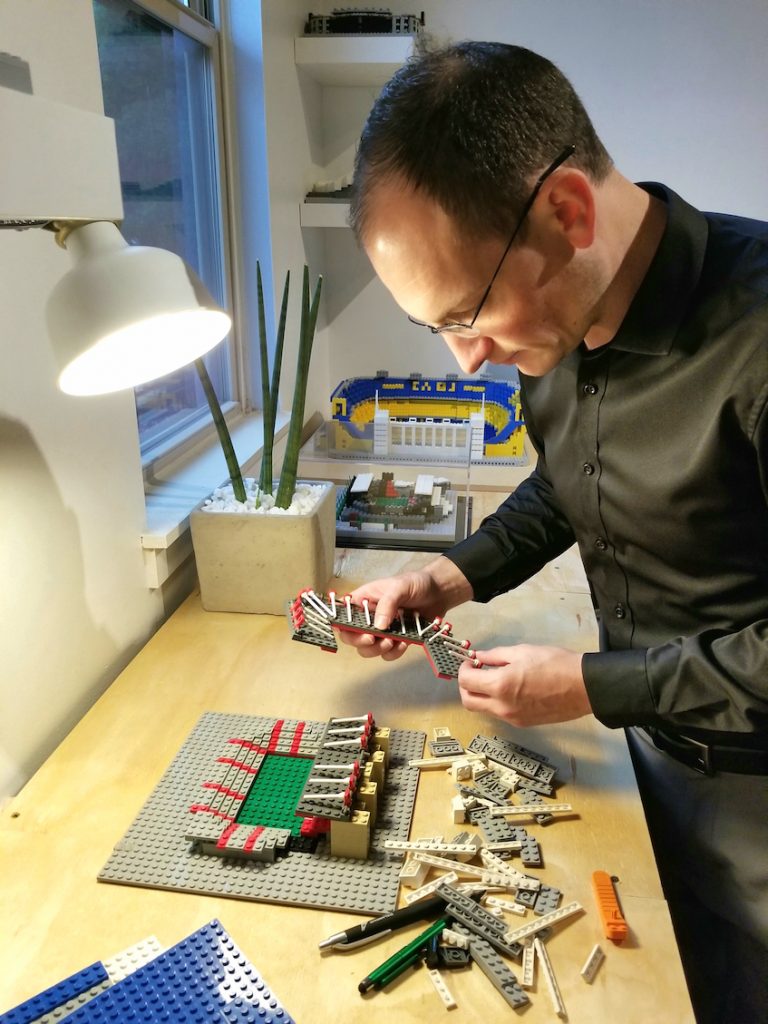 At home, however, Krivanek’s got a hobby that utilizes all his mad-crazy architect skills—just at 1/10,000thof the size. Krivanek replicates stadiums (… wait for it …) out of Legos. In fact, he’s been a Lego enthusiast since before he started grade school. “I remember the day I went to kindergarten, I knew I wanted to be an architect. And it was fueled by accumulating Legos as gifts and from garage sales,” says Krivanek. “From the age of three, I’d play with Legos. It was all about experimenting.” As Krivanek put it, if he got a pre-fab template of Legos, say for a racecar or something, he’d use the pieces to create anything but that. It’s how his mind worked. “And I think just doing that over and over allowed me to visualize anything on a Lego scale.” 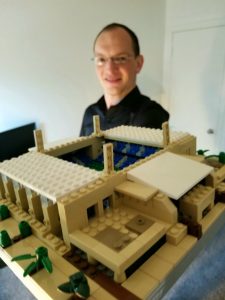 Along the way, Krivanek became a sports junkie and traveled around the globe visiting different stadiums. Sure, he’d go for the game, but he’d also want to check out the cultural aesthetics of each stadium. “I would explore stadiums that were architecturally or culturally unique. The reason why I do that is because of my interest in the cultures of different countries—it allows me to become more familiar with where the stadium is”, says Krivanek. “That’s what drives which stadiums I choose to build. What makes it an interesting place? What can I learn about the place? Building a model is a way to discover the architecture of the stadium, but at the same time I’m becoming more familiar with where the stadium is and how it brings people together.”

Now you’ll often find Krivanek hunkered down in his Lego lair on evenings and weekends working diligently on his hyper-detailed creations. It’s a relatively affordable pastime as he recycles the hundreds of thousands of Legos he’s been gifted over the years. 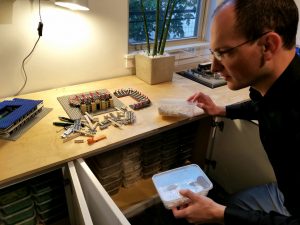 His Legos have Legos.

“A lot of them come from the collection I’ve had since I was three years old. My parents never sold them,” Krivanek laughs. He has Legos stashed away in his basement, garage, and closets. Some are meticulously organized. Others that he’s been gifted, perhaps via garage sales, are strewn together willy-nilly.

Krivanek can spend six to ten hours working on the nuances of his stadium creations. The color, the dimensions—everything has to be just so. “Each model is different. You lose track of time because you’re just in the zone,” says Krivanek. “It all starts when I single out a stadium. I find a ton of images through internet searches. I’m trying to get a sense of it from inside and outside. It’s all about focusing on the basic shape, the color and material. That alone gives me a great start. Then you focus on key architectural elements and I experiment with how that translates into Legos.”

Think of it as worlds colliding. His big-boy job and little-boy hobby have met squarely in the middle. He is now aware that stadiums are more than just places where teams play sports. In some countries, they are ground zero for escapism. 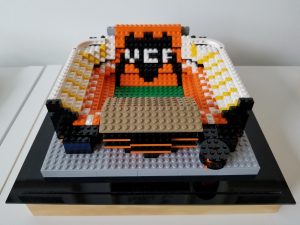 “There are not many building types where 20,000 to 80,000 people can congregate at the same time—so naturally the stadium becomes a centerpiece for a city,” says Krivanek. “Stadiums are where you learn about the local culture and what they’re passionate about. The stadium is the place where everyone congregates. It’s two or three hours where you can get away from normal life and enjoy people. You have that relationship naturally.”

Someday soon, Krivanek hopes his Lego handiwork will end up in the stadiums he’s created. 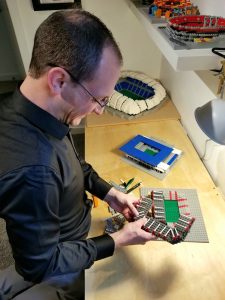 “I think the ultimate goal—what would please me the most—is that these would be exhibited where kids and adults could see it. Like a playful representation of the place when they walk in,” says Krivanek. “I never went into this thinking I could make a lot of money—it was about discovering a stadium I find interesting and building it.”

As he talks about his creations, Krivanek smiles. He hopes his Lego stadiums put smiles on the faces of other people too. It’s about waxing nostalgic and finding your inner child. “It’s something that everyone can relate to—young and old,” says Krivanek. “Legos can be used to represent anything. It has an inherent fun to it.”