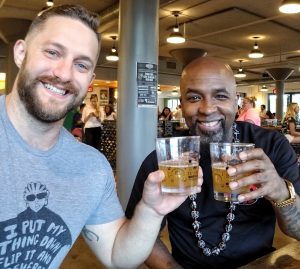 Pat Mullin landed the job we all wish we had—Boulevard Brewing Company’s Digital Marketing Manager. We have no idea what he actually does, but we do know was able to drink beer on the job while filling out this questionnaire. Score! He’s also now BFFs with rapper Tech N9ne who has his own limited edition, fancy-schmancy Boulevard collaboration beer, Bou Lou. Double score!

We peppered Mullin with all the Boulevard Brewing Company stats we could think of, plus the occasional stupid question just to see if he was paying attention. He was.

How many years has Boulevard been doing its thing? 29. John McDonald delivered the first Pale Ale keg down Southwest Boulevard to Ponak’s restaurant.

How many years have you worked there? Four—in December. It hardly feels like it has been that long. I know it’s cliché, but time really does fly when you’re having fun. It especially flies when that fun involves a lot of Tank 7 … and Bourbon Barrel Quad … and Whiskey Barrel Stout … and Jam Band, and … well, you get it.

How many beers have you consumed working there? If I was able to keep track of how many I had consumed up to this point, it’d be safe to say I’m not consuming nearly enough.

Weight you’ve gained working there? Approximately 25lbs. That’s five body fat percentage points, four new pairs of pants, and one chin—and I regret none of it. *cries into old pair of ill-fitting jeans*

What’s the number of spirit and wine barrels in Boulevard’s cellar currently? Over 5,000. They have had a wide variety of prior uses: holding everything from bourbon, tequila, and rum to port, cognac, brandy and more. We have an incredibly talented group of brewers and our barrel-aging program has grown like crazy over the past few years thanks to their innovation and creativity.

How many guests toured Boulevard last year? Over 80,000. (Special shout out to our amazingly personable and knowledgeable tour guides!)

When was the War of 1812? 1492. I’m no history buff, but I feel pretty confident that’s when it took place—leading up to the Declaration of Independence being signed by Albert Einstein.

What was attendance for the first year of Boulevardia? 35,000—over three days when it debuted in 2014.

What was attendance for Boulevardia in 2018? 35,000. But now the festival is now only two days. Fun fact: In 2018, attendees came from 43 states and the District of Columbia!

How many kegs of beer have you sold in the last decade? The equivalent of 812,586 full size (half barrel) kegs.

Number of Boulevard beers that have been discontinued? This is a tricky question to answer because sometimes beers are “discontinued” but come back in different ways. We often go by the “never say never” mantra around here and beers can come back from the dead.

How many employees work at Boulevard? 173 beer-loving/slinging/supporting Boulevard employees.

How many employees at Boulevard are equipped to answer questions like this? Equipped? Most of them. Willing to? Never mind.

How many groups/events/non-profits/etc. does Boulevard donate to each year? Nearly 500 organizations.

States that serve Boulevard on tap? 40—after our expansion in to Nevada this year. Plus, the District of Columbia.

How many beers were served at Kauffman Stadium last year? Over 520,000! Kansas City is definitely the best at drinking beer and watching baseball. I don’t know that there’s a way to objectively measure that, but I just said it, so consider it to be true. Good job, Kansas City!

How many beers have you consumed while compiling stuff for this stupid article? Oh, I moved to whiskey, like, six questions ago.