When managing partners Grant Baumgartner and Chris Ruhl launched Edward Franklin Building Company over three years ago, their initial project was a teeny lot in Columbus Park. Baumgartner found it by happenstance, which turned out to be a bit of serendipity. “The lot for sale was from a burnt-out house built in 1880,” says Baumgartner. “We wanted to turn that space into a row home that would blend with the neighborhood—a 22-foot-wide house with an old feel, but modernized. We were the first new home in Columbus Park in at least 20 to 30 years—and it sprung us off into a business.”

Growth, Expansion and Accolades
From that, the duo found themselves with more projects on tap in the Columbus Park area, including a new build in another classic neighborhood, Hyde Park. The niche design of their heritage-friendly homes quickly gathered buzz. “We’re a development and building company that’s focused on growth around the urban core in Kansas City’s oldest neighborhoods,” says Baumgartner. “We focus on bringing the detail and character that flows in those older areas.”

From the Westside to Crossroads to Brookside, the team began focusing on “filling in the spaces in these old neighborhoods and bringing modern living to these old houses through remodels and new builds,” says Ruhl. Along the way, they’ve won over many neighborhood associations and groups, which aren’t always necessarily receptive to reinvention. “We’ve developed relationships in these neighborhoods and gained trust,” says Baumgartner. “Because—early on—they were frustrated by builders, but we ran ideas by them and asked for their input. We’re building products they’re proud of, building things that fit in. That’s a big aspect of our success. We want to be part of these neighborhoods—not take from them from a development standpoint.” 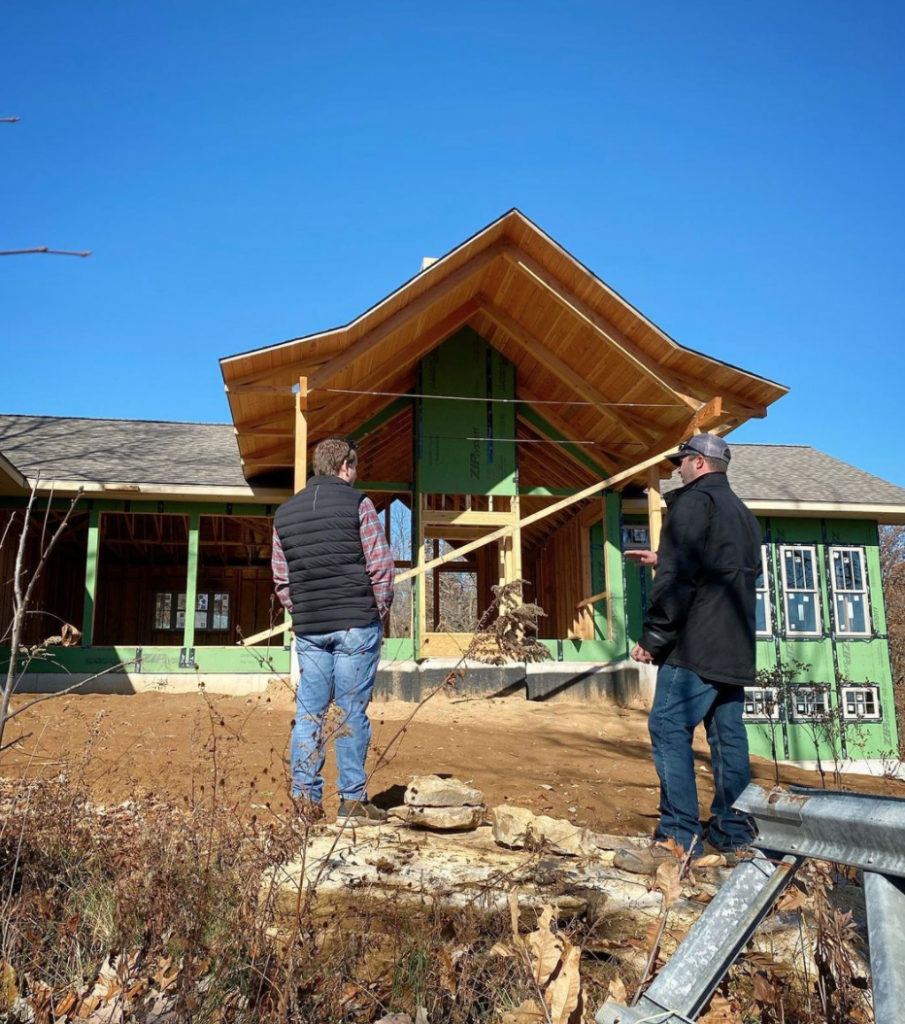 Initially, the company pushed the creative development and design envelope. That’s still the case today. “We are building something completely different than anyone else in KC,” says Ruhl. Take one look around any of the downtown-adjacent neighborhoods, and you’ll find Edward Franklin’s single-family construction handiwork. “Especially in the areas of downtown that are only building giant apartment buildings and condo towers. Let’s give people options,” says Ruhl.

In 2020, the team set their sights on a new venture, their first development. Franklin Heights was their first micro development perched on the hillside of the iconic Westside neighborhood. Overlooking downtown, four row homes sat overlooking downtown. Designed to have more of a Brooklyn brownstone or row house vibe to them, Franklin Heights is a blend of historically modern design—something the team has coined for their brand. They entered the home on the KCHBA Homebuilders Parade and received the Gold award for Pick of the Parade and first place in Distinctive Plan and Design. “We had a few perfect scores from the judges—a first in their judging history,” Baumgartner says. “We had people coming through to see and experience (the house) just from word of mouth. Even the mayor stopped by.”

With all 4 sold, the team is excited to launch additional micro projects in the area. This fall they plan to enter one of their upcoming projects in the Westside on the Parade of Homes this fall. “Again, our approach to these projects in the Westside is from an infill viewpoint—creating something that feels like the historic neighborhood,” says Ruhl. “But the minute you walk through those doors, you instantly feel like you are in another city, the experience we create with our homes in like no other and is felt the minute you walk in the front door.”

“We’re not building the same suburban house over and over.”
While their homes pay homage to many different eras, make no mistake—their revolutionary designs are state of the art. “Working in these established neighborhoods gives us the chance to try new things,” says Baumgartner. “We’re always aware of the architectural and cultural landscape. That’s key—making sure we’re building something that honors that era but modernizes it for everyday living. That’s a core concept for us—and for these custom builds. How will it fit the neighborhood for the next hundred years?” 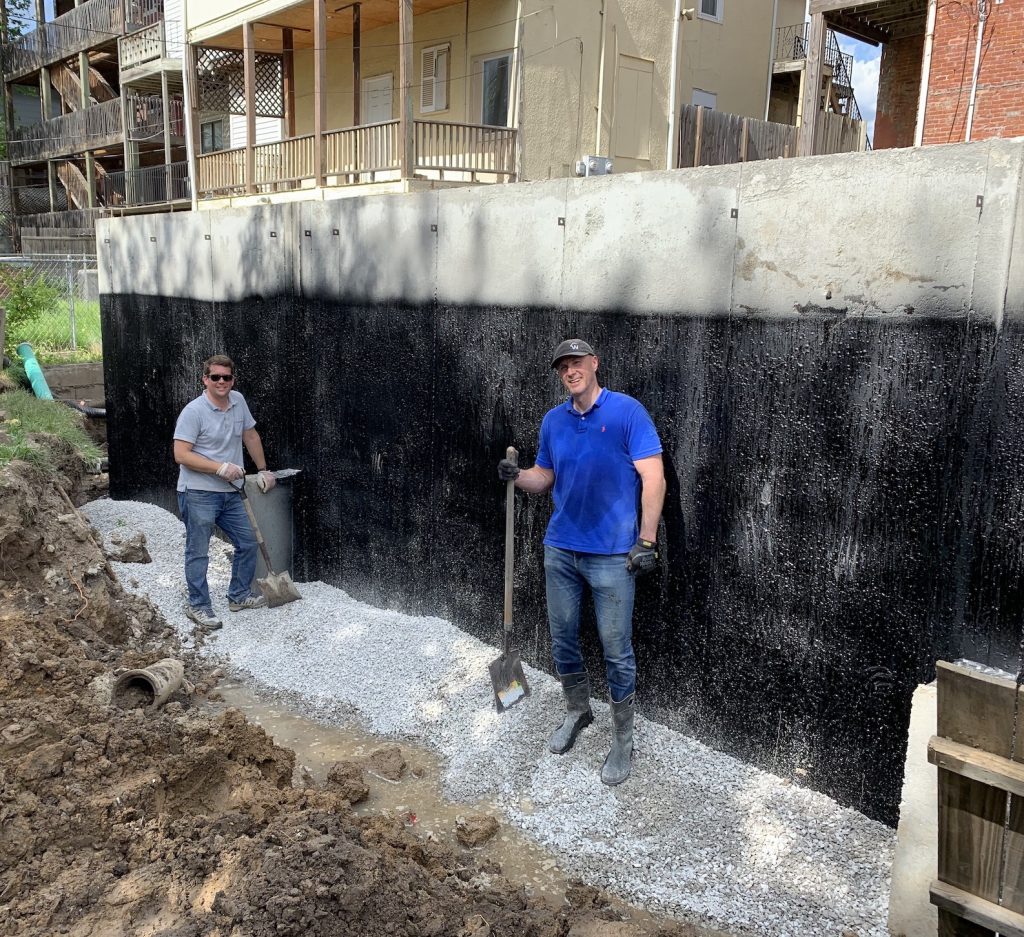 For Baumgartner and Ruhl—who forged a 25-year friendship beginning in high school—the key to these timeless dream homes is imagination. “Our designer comes up with ideas, and we paint on a canvas that’s new and different,” says Baumgartner. The company is named after his grandfather, Edward Franklin Baumgartner. “He moved to Kansas City during WWII like so many others and settled in Midtown where he met my grandmother,” he says. “We named the company Edward Franklin to pay homage to him and felt it represented the timelessness and classic nature of Kansas City’s old neighborhoods.”

2021 and Beyond
With an uptick in business last year, the team is excited to see what 2021 has in store. One of their newest endeavors is a commercial venture near 18th and Locust streets in the Crossroads. Think neighborhood bar meets New York deli. “It’s certainly a cool concept. It’s split into two sides: a bar side that’s dark and urban with rustic wood floors—a beer-focused everyday bar. The restaurant side—the deli—is white, crisp, and airy,” says Ruhl. “And there’s also a private bar downstairs that’s bound to be the best-kept secret in the Crossroads. It has a high-end, elevated vibe, yet it’s a place where you can go every day.”

The company is also on track to build several—as they call them—true moderns. “Our clients get to design their homes from the ground up. We’re hands-on every step of the way,” Baumgartner says.  “And we’re having fun with it.”