The digs may be new, but not much else has changed at Capital Grille’s fresh Country Club Plaza location on Broadway.

The restaurant transitioned from its original Jefferson Street space in August to make way for the incoming Nordstrom store and settled in seamlessly. The new space is considerably larger—at more than 15,000 square feet with a layout filled with twists and turns, getting lost is a legitimate risk. The extra square footage paired with high ceilings make this latest iteration of the Capital Grille seem more open than its predecessor. Although the dim lighting, dark wood, and crimson curtains ensure it maintains the signature steakhouse ambiance, it’s less stodgy, with a central floor-to-ceiling wine kiosk acting as an eye-catching design element.

Artwork featuring local fountains, the Western Auto sign, and other KC landmarks nods to the fact that although Capital Grille is indeed a chain, it’s one with deep roots in Kansas City, having moved into the market 18 years ago and long a dining mainstay on the Country Club Plaza.

So what makes the restaurant’s hold on Kansas City so enduring?

Consistency. After almost two decades, the appeal is in knowing exactly what you can expect: White tablecloths, pleasantly inoffensive music playing softly in the background, attentive service that borders on being unnerving (depending on how much you like the sensation of being closely watched) and a high-quality, properly prepared steak. 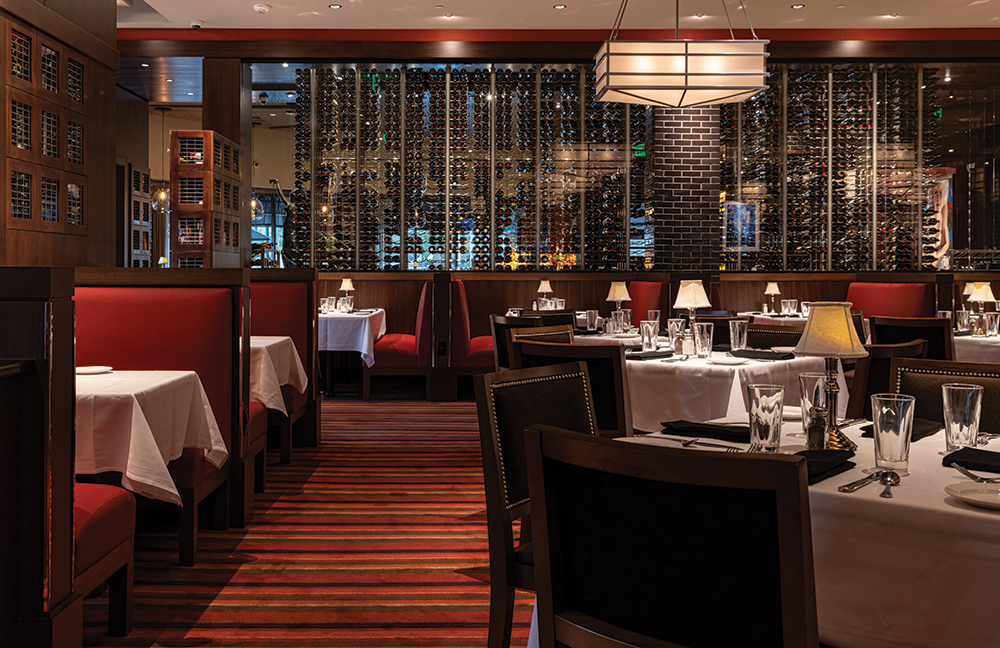 The food isn’t particularly inventive, but it is reliably tasty. And besides, dining at Capital Grille isn’t just about what you eat—it’s the experience of having your glass of water refilled after every sip, watching the choreography of veteran servers in their blazers, and returning from the bathroom to find the napkin you carelessly tossed aside has been neatly folded in your absence. In other words, it’s the feeling of being cared for, with a side of tuna tartare.

To give credit where credit is due, the tuna tartare is impeccably executed, with a tower of tuna resting atop avocado and cucumber chunks in a pool of mango puree dotted with Sriracha. Pearls of soy sauce burst unexpectedly in every few bites, a salty, umami kick that cuts through the richness of the other flavors. Along with the beef tartare, the dish is one of Capital Grille’s most beloved appetizers. The classic wedge salad, served with blue cheese and smoked bacon, also makes for an ideal start to a steakhouse dinner.

Beef and seafood reign supreme among the entrees. Seafood offerings include fresh Maine lobster, seared citrus-glazed salmon and sea scallops with asparagus and shiitake mushrooms. But red meat is clearly dominant, taking up three times the space on the menu to showcase a wide array of cuts—KC strip, filet mignon, bone-in ribeye, and veal tomahawk chops, to name a few—prepared with a few flourishes and served sans sides, which can be ordered on their own to be shared among dining companions.

Just as you’d expect, they’re difficult to find fault with. The sliced filet mignon is a perfect medium rare and fanned to please the eye, served with a whole cippolini onion, earthy wild mushrooms, and a fig essence that gets a bit lost. The KC strip au poivre features a cognac cream that adds complexity to the pepper-packed plate. Any entrée can and should be enjoyed with the lobster mac and cheese, one of the restaurant’s signature sides. In a sea of dishes that simply live up to admittedly high expectations, the mac and cheese for grown-ups is actually exceptional, creamy and rich, with big, juicy chunks of lobster that hold their own against the tang of the cheese.

The dessert menu features standard fare, including cheesecake, crème brulee and the much-lauded flourless chocolate espresso cake, but the server recommends the coconut cream pie. It’s not a slice but an individual pastry, featuring a graham cracker crust topped with a mound of whipped cream, drizzled in house-made caramel sauce and finished with a buttery coconut tuile. A hint of rum comes through, balancing out the sweetness of the dish and making it a must-order.

The Capital Grille experience doesn’t end when you finish with your food. Should you choose to take home any leftovers, the tasteful brown paper carryout bag comes adorned with a note of appreciation signed by the chef. Your wallet may be considerably lighter, but your refrigerator has never seemed more sophisticated.

Our Man in KC: Crossroads Arts District and Gram & Dun

Talk About A Catch! Ocean Prime Restaurant Coming To the Plaza