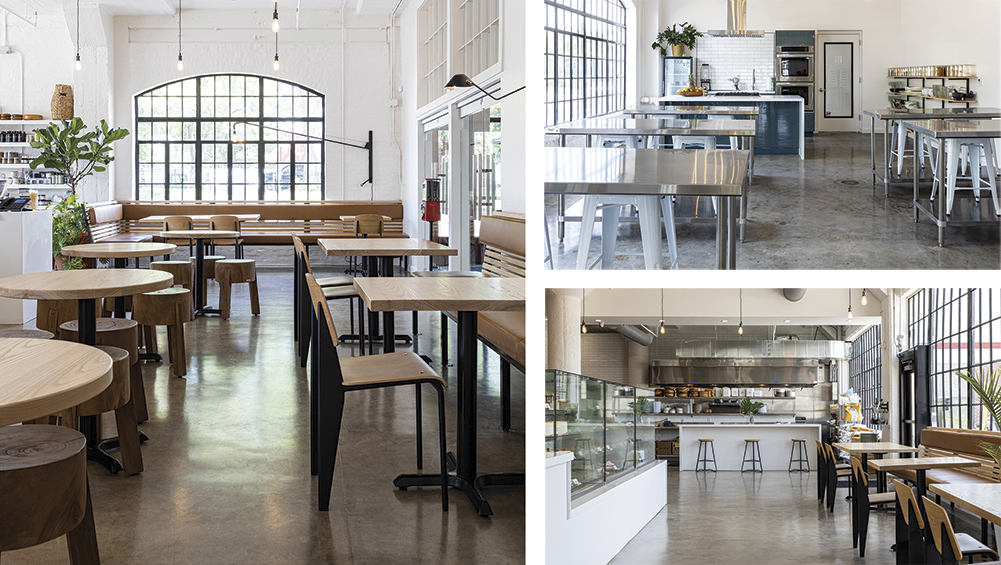 On the outside, it’s a Midtown monument to local history. The Spanish Colonial Revival-style building is rendered in brick and terra cotta made even more striking by the passage of time. Designed by trailblazing female architect Nelle Peters and constructed in 1928, it’s earned a spot on the National Register of Historic Places.

Billie’s Grocery, one of the building’s new tenants, provides a dramatic contrast to the aged grandeur of the exterior. Polished concrete floors, stark white walls, minimalist furnishings, and neat rows of Edison bulbs make the eatery a portrait of modernity.

Although the space is styled with neutrals, it’s really just a canvas to show off the vibrant colors and textures of the food conceived by owner Robin Krause, a nutritional therapist practitioner and the owner of East Brookside’s Unbakery. Krause is also the owner of another business in the Peters building, internal wellness apothecary Apothé, which offers wellness workshops in addition to Billie’s hands-on cooking classes.

Cubes of electric pink watermelon are topped with sapphire-hued mint leaves and a sprinkling of black and white sesame seeds in a surprising sesame ginger watermelon dish. The sesame and ginger flavors make themselves known, but the watermelon’s subtle sweetness still comes through, lifted by the bite of charred green onion.

Fresh, healthy ingredients like those in the watermelon dish make up the majority of Billie’s offerings. Currently open for breakfast and lunch, morning fare includes a hearty avocado toast, a slice of sourdough with avocado, beet root, herb butter, greens and a soft egg. Lunch offerings consist of a variety of sandwiches and bowls. The lazy sushi bowl—a blend of brown rice and quinoa, tuna, veggies, kimchi and pickled ginger—is a smart concept, although the herbaceous, almost chimichurri-like sauce served on the side is overpowering enough to drown out any other flavors if not used sparingly.

With so many veggie-forward dishes on the menu, it comes as a bit of shock that one of the standout items is Billie’s Reuben, tender pastrami with house-fermented purple kraut that maintains its crunch and a horseradish mayo that should be on every sandwich’s wish list. A sizable pile of beautifully colored and seasoned fries comes on the side—snappy and fried with aplomb, they’re some of the best you’ll find in town.

Food only makes up a portion of the offerings at Billie’s Grocery. There’s also a long list of coffee drinks that boasts unusual ingredients—from the dandelion-root latte with chicory, mesquite, and ashwagandha to the Shroomunity Latte, which features a mushroom-blend syrup—plus fresh juices and smoothies.

The drinks are a showcase for one of the core elements of Billie’s menu: Offering delicious options to people with a variety of diets, including gluten- and dairy-free, as well as vegan. The commitment is also apparent in the pastry cases flanking the counter where guests place their orders. It’s a veritable treasure chest for anyone shut out from normally indulging in beautiful desserts. The appeal isn’t lessened for those without dietary restrictions—the key lime tart in a gluten-free crust is acidic enough to make your mouth water and sweet enough to keep you coming back for another bite and perhaps another whole dessert. There are plenty to choose from: luscious triple-chocolate cakes, brownies, tea cakes, cookie-dough bars and more.

Vegan desserts and dandelion-root lattes may conjure up visions of the West Coast and Gwyneth Paltrow, but Billie’s Grocery’s Midwest heart helps make it feel like an appropriate addition to KC’s dining landscape. The service is quick and friendly, and the guests seem too absorbed with their warm conversations and satiating plates of food to give much thought to the benefits of adaptogenic mushrooms. But if you do want to know, Billie’s is there, the culinary equivalent of your favorite aunt who used to live in California and always has a crystal in her purse.

A Feast for the Eyes: 12 Restaurants with Great Ambience