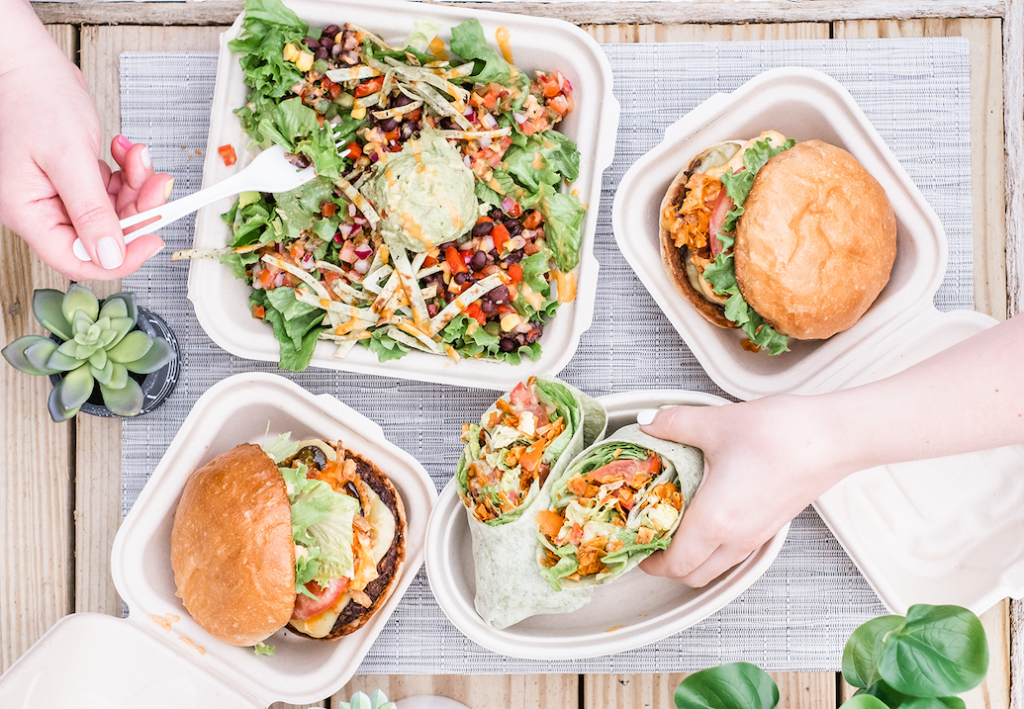 Kind Food chef and co-owner Phillip Jones always knows when he’s hooked people on his feast-worthy vegan fare. It’s when a guest—usually a newbie—finishes their meal and shyly comes back up to order seconds (or sometimes thirds). He says, “they always say, ‘Uh, can I get another one of those?’”

“Plants Can Be Frickin’ Delicious!”
Jones and his wife and co-owner, Jonelle, were initially vegetarians who became vegan several years ago. With Phillip’s extensive culinary background and Jonelle’s expertise in marketing, the duo decided to start a business to dazzle an otherwise carnivorous clientele. They started slowly while Phillip honed his menu—doing catering gigs, weddings, and pop-ups as they built their now ravenous fan base. Half the battle was just getting people to try their flavorful plant-based menu. “One of our biggest goals is being able to expose people who might not try vegan or plant-based food to see how good it could actually be,” says Jonelle. “A lot of people equate vegan with tofu or salads—but the truth is plants can be frickin’ delicious. [Phillip] has worked on creating really, really good food. It’s worth trying at least once.”

“Vegans Are Pretty Loyal.”
Their newest venture, Kind Food, located in the trendy Iron District in the northland, has now been open for a little more than a year. While their followers helped get their restaurant off the ground—“vegans are pretty loyal,” says Phillip—it was repeat business from new fans that helped propel them.

The Iron District’s spacious, carry-out friendly, outdoor-only atmosphere was wildly inviting to people trying to socially distance. “We lucked out. We grew during last winter—and the outdoor space in 2020 ended up being our saving grace,” says Jonelle. “We were closed in March and April, but when we reopened, we stayed busy and continue to do so.” Carryout and curbside also did gangbuster business.

A Try, Try, Try Again Menu
Despite Kind Food’s miniscule kitchen and even smaller freezer and storage space, the menu is both extensive and impressive. It should be—as it took years to perfect, the duo admits. “It can be challenging in a tiny kitchen to branch out. We only have so much space and inventory. It’s a fun puzzle,” says Jonelle. “Our nachos are really, really popular—but our cashew-based queso took 25 to 30 tries to get it right.”

When asked to narrow down their favorite thing on the menu, both Jonelle and Phillip hesitated. (Editor’s note: always a good sign!) “This is a really hard decision,” says Jonelle. “It would be a toss-up between our Gateway Classic Nacho or our Bacon Mushroom Meta Burger.” Phillip agrees, “The Bacon Mushroom Meta burger, for sure. It’s savory. It’s decadent. It’s delicious.” (Fun fact: Kind Food sells so many made-from-scratch burgers that “50 percent of my time is spent making our burgers. I spend all my prep time just making burgers,” Phillip confirms.)

A few of their newly inspired (and wildly popular) offerings came straight from customer suggestions. “We have a buffalo chicken now that was born out of our customers’ wants and ideas—kind of a combination,” says Jonelle. “It’s maybe our most popular thing right now.” Phillip adds, “And it’s growing like wildfire.”

Conceptualized In Kind
The squad at Kind Food is hyper-conscious about their carbon footprint, which is why nearly everything—including carryout containers and silverware—is compostable. “Our vision and where we’re coming from? We focus on three types of ‘kind,’” says Jonelle. “Kindness to animals, obviously; kindness to the planet, recycling and reducing our waste; and trying to partner with vendors who are conscious of their footprint. And we focus on kindness to others and our community. We do fundraisers, item drives, and we do donations.”

For now, the Jones’s are happy to see people not only enjoy the food they serve but rave about it afterwards. “I like to say that I want people to eat here because the food is delicious, not because it’s vegan. That’s our thing,” says Phillip. “The food here is great. That’s what I always try to tell people. People come in to see what this place is all about. Last winter we captured a lot of non-vegan customers and they keep coming back. That makes me happy—to feed people, get their reactions and know they love our food.”