Fact: Kansas City folks love brunches—with every fiber of their being. Another fact? Restaurants are wholly aware you can’t just serve up bacon and eggs anymore and expect to cultivate a brunch-bunch following.

In the last decade or so, Chef Bradley Gilmore has seen the evolution of brunch here in the metro—and he’s living for it. “We are an elevated brunch town—period. People want energetic, fun brunches,” he says. “Kansas City is also a social town—so brunch is about seeing and being seen. Um, and curing your hangover.”

When Gilmore opened Ignite Wood Fire Grill in Lenexa a couple of years ago, he put a lot of blood, sweat ,and tears in to his ever-evolving menu offerings, but, he says, he paid extra–special attention to what decadent fare he wanted to serve for brunch. Why? “There are lots of restaurants vying for that loyal brunch customer. And I wanted mine to stand out, to be the best. And it is.” 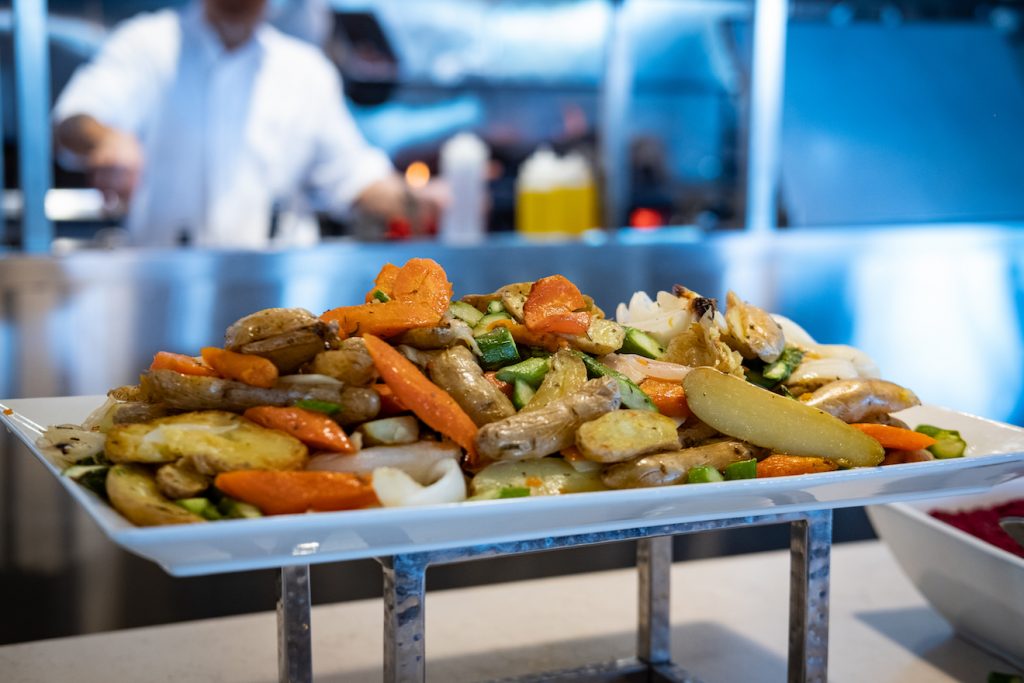 Every Sunday from 11 a.m. to 5:00 p.m., Gimore is determined to turn brunch on its head. “We do things a little differently around these parts,” he says, laughing. “Guests are more than welcome to simply order an entrée, but we’d suggest they check out our appetizer bar beforehand. That’s where the magic happens.” Gilmore isn’t kidding. He and his culinary team put out a rotating bevy of 15 to 18 tasty treats that keep faithful patrons coming back week after week. “It’s never going to be the same thing. Every week is something new and inspired,” he says. When we popped in, we noticed a sampling of parfaits and tropical fruits. A little further down, gourmet hummus and dips were all the rage. (Sweet-potato hummus for the win!) Gilmore even had two kinds of shrimp to sample. And don’t even get us started on all the pastries, tarts, and rolls. If carbo-loading were a sport, Gilmore’s team would win the gold. There were approximately 372 fresh blueberries in the cobbler we tried.

What was the genesis behind the glorious appetizer bar? Well, for one, Gilmore wanted to flex his culinary muscles for his guests. “Why just try one brunch item, when you could sample over a dozen different things? And that’s in addition to your entrée!” says general manager Brittany Gilmore. And the second is almost laughably accurate: People don’t like to wait for brunch. “Seriously. Guests can be enjoying our killer grub, in like, 60 seconds after they walk in,” she says. “Let’s face it—on Sunday mornings, when you’re hungry, you’re hungry!” 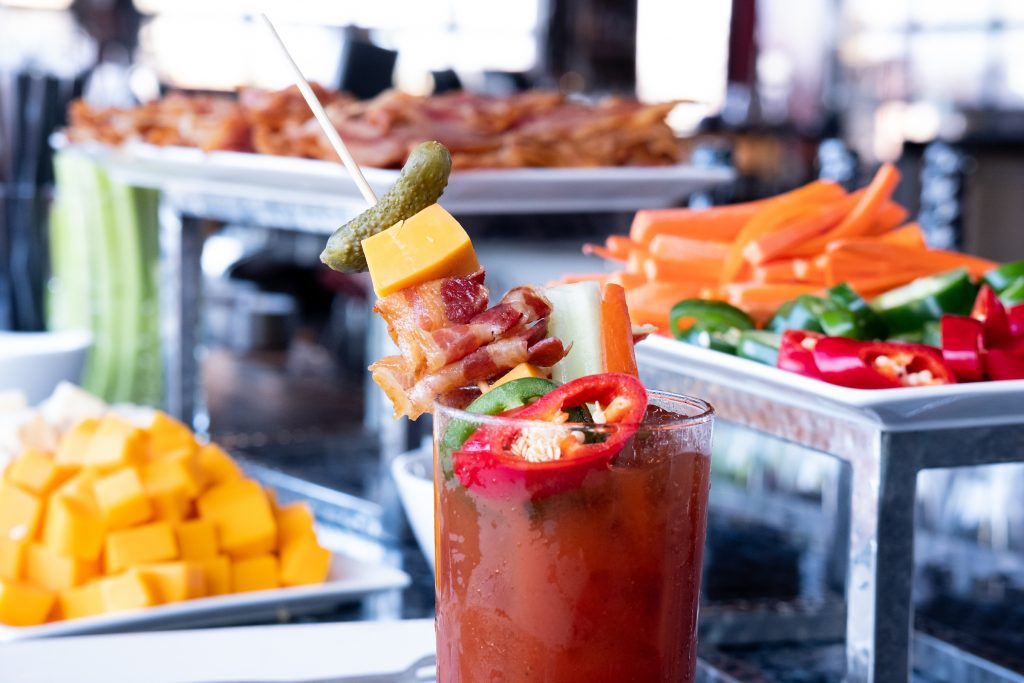 And the same goes for Ignite’s famous customizable, create-your-own Bloody Mary and Mimosa bar. Order your first one for $8.00 and refills are a mere $1 after that. Plenty of fixins’ ensure that your morning Mary or mimosa is just how you like it. “Sure, some guests head to the app bar, but most head straight to get a drink first. I mean, why not? We’ll help you get your drink on. It’s not called Sunday Funday for nothing,” says Chef Bradley.

Gilmore’s playful, adventurous side always comes out during brunch too. He turns the music up just a notch higher. Ignite’s brunches are nothing if not lively and energetic. In fact, he and his team just whipped up three new, inspired menu items that are destined to be crowd favorites: 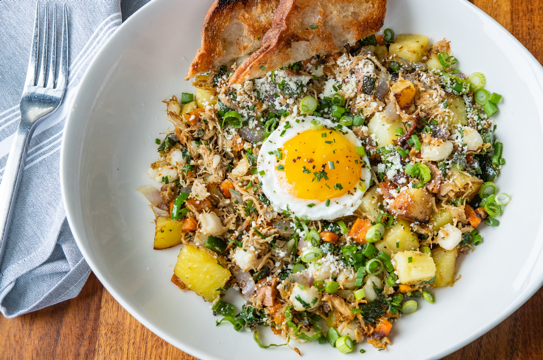 First up? A green-chili chicken hash that Gilmore promises isn’t too spicy. “With roasted Anaheim and poblano peppers, it’s got a mild, earthy flavor. We throw in chanterelle mushrooms, hominy, and an egg sunny-side up. Served with Yukon potatoes, it’s perfect.” 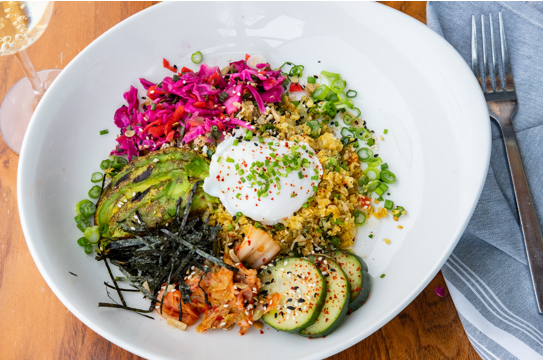 Next, on the healthier side, an Asian-inspired cauliflower rice. “It’s a heart-healthy dish—fried cauliflower rice, Korean cucumber pickles, kimchi, nori, roasted peppers. We fry it all together with a poached egg on top. Bliss.” 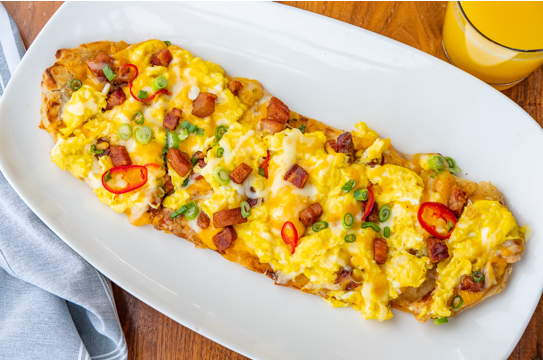 Finally, because he is obsessed, a gourmet breakfast flatbread. “Three words: Bacon.  Bechamel. Sauce. Along with scrambled eggs, we mix in local pork-belly lardons to give it some crunch, add cheddar-jack cheese and bake it on our homemade flatbread.” (Did we mention he’s obsessed?)

And while he’s happy to serve it, Gilmore prefers savory over sweet breakfast fare. “Maybe chicken and waffles, but with a spicy syrup,” he says. “Or, say, biscuits but with a chorizo gravy.” (Our suggestion? Order the crab-cake benedict. There’s a reason why it’s a top seller, says Brittany Gilmore.)

The chef says Kansas City deserves a good brunch. “This city has partied so hard over the last couple of months, people need a good, ‘new-fashioned’ brunch to get them going—or keep them going,” he says.

Bistro 303 Owners Introduce New Concept Next Door at The Peacock