Oh, b-oysters! We’ve heard of dueling pianos—and even dueling banjos. But dueling chefs? Mass St. Fish House & Raw Bar in Lawrence has not one, but two chefs running the upscale seafood restaurant. We had oh-so many questions for chefs Michael Stornello and Harrison Soelter. Like, do they get along? And, more importantly, how in the halibut does it work?

Stornello will be the first to admit it’s a weird premise, but it has evolved quite nicely. “The positive side effects that blossomed from this arrangement? You have a ‘partner-in-crime’ who is just as capable, but in different ways, as you are,” he says. “Harrison and I work to communicate and nurture our relationship as head chefs to better the restaurant. Most of the time, we agree how the restaurant runs better a certain way, or how a cook should behave, or how a dish takes shape. It takes constant work, and I have a lot of respect for Harrison. There are very few people I could share this job with.”

Both chefs are graduates of JCCC’s Chef Apprentice Program, but the coincidences don’t stop there. “We worked at similar restaurants in Lawrence before both venturing to either coast. I went east, to Richmond, Va., and Michael went west,” says Soelter. It was during that time both chefs gained experience working with local farms and high quality seafood. Now that they’ve both returned to landlocked Kansas, they’re bringing all that knowledge and know-how back home “in the dead center of no coast,” says Soelter, who brags the bistro offers a great selection of East and West Coast oysters. “One of the best oyster programs I have ever come across,” he boasts. “We offer sustainably fished seafood and incredible local produce. It is something I never thought could exist in the center of the United States, but here we are.” 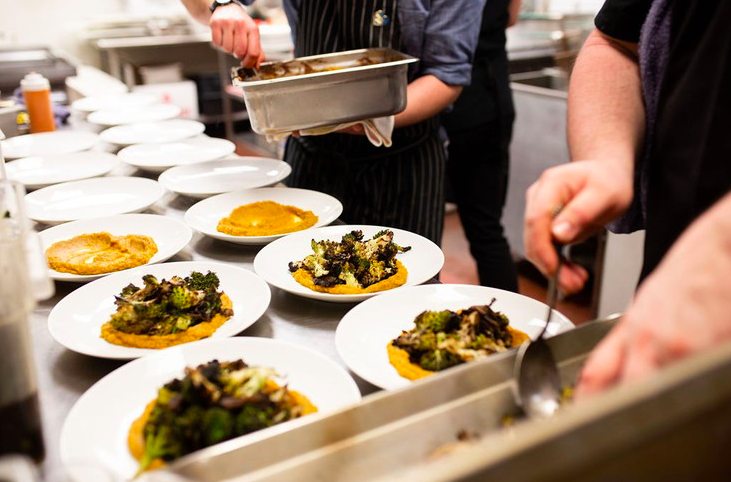 Yeah, but, come on—aren’t they even the tiniest bit competitive? Yes and no. “There is some disagreement in brainstorming menus,” Solter says, but adds they “stairstep” through the creative process to bring the ultimate menu to customers. “It definitely feels like a chosen family at the Fish House. Michael has more of a saturated wealth of knowledge with a more Sichuan/Italian vibe. I am more of a South Korean/ Vietnamese cuisine person,” he says. “Couldn’t imagine it working too much better. It’s good to have somebody that gets what you are talking about.”

One thing both chefs can agree on? You best bring your appetite. The menu is set up to be eaten family-style. “I’m a big fan of the mix-and-match meal—and could see myself ordering apps and entrees to share with everyone,” says Soelter. “This is the best way to get a full idea of what the restaurant is about too.” Oh, and they can both eat their weight in pasta (or noodles, as Soelter calls it). We’re talking serious carbo-loading. We could both eat every style/every culture all day,” says Soelter.

And—as if two chefs weren’t enough—Stornello and Soelter like to throw other culinary pros into the mix. The most recent was a joint pop-up with Ed Castello of ÇaVa. “That collab dinner has been one of the most fun and successful events we’ve accomplished,” says Stornello. “We should have more on the way, so stay tuned for sure!”

Another combo-goal? To work towards a smaller ecological and ethical footprint. “This year we are incorporating a compost and recycling program, and hopefully get some neighboring businesses involved as well,” says Stronello. “If you’re gardening and would like some oyster shells, call and ask for a chef.” 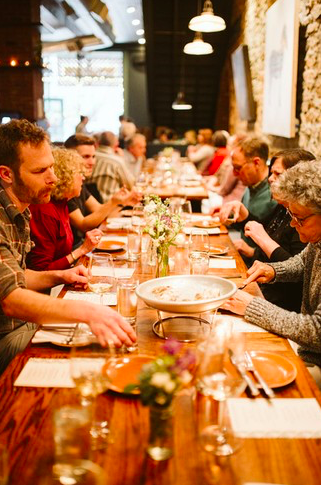 Finally, what’s the one thing they’d choose from their menu? For chef Stornello—”The oysters. It’s a whole macrocosm. I’m a sucker for crab rangoons as well,” he laughs. Chef Soelter says try everything—and then some—and don’t be shy about it. “Life is too short to just have one entrée,” he says. But—holy mackerel!—you better save room for dessert. “Our pastry chef Ryan Young does a phenomenal job of creating composed desserts that always surprise me. He has elevated our dessert program and makes it hard to skip.”

Behind the Music: Nick Carswell

Why Cook When You Can Order Thanksgiving From These Local Eateries?