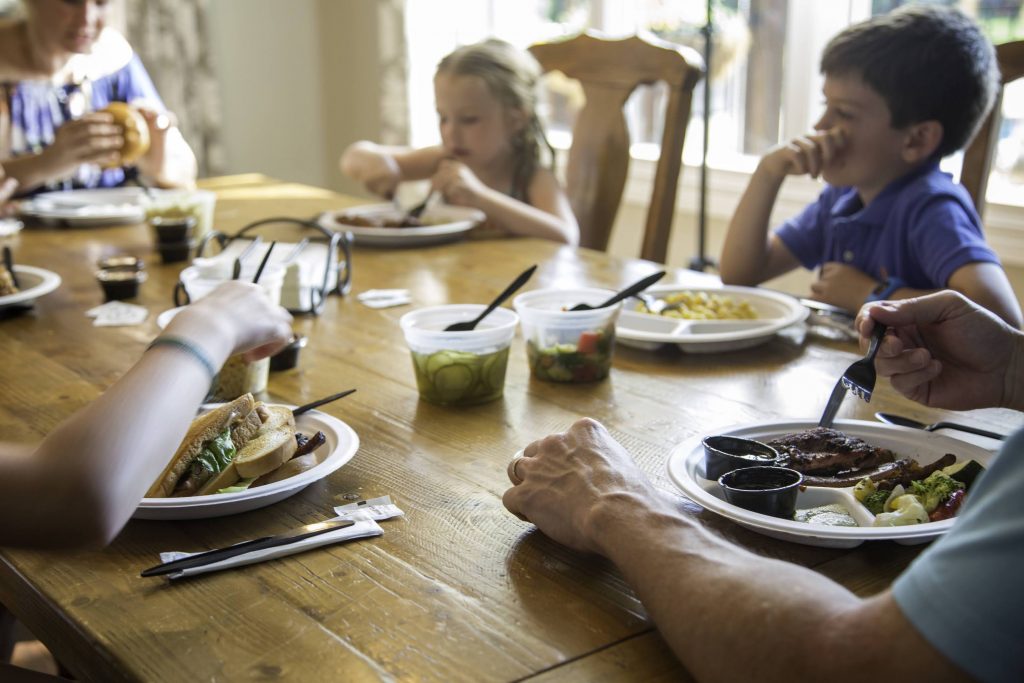 In a world of unfamiliarity right now, one thing is pretty constant: Kansas Citians are continuing to consume their weight in barbecue. And if the socially distanced lines at some of the local barbecue joints are any indication, it’s become a staple of our quarantined life. Our new normal still needs old favorites, it would appear. We posed questions to four local eateries to find out what’s going on behind-the-scenes at some of your fave barbecue haunts.

Joe’s Kansas City Bar-B-Cue
Despite being down in daily sales by “about 50 percent”, Joe’s KC continues to see gaggles of carnivore enthusiasts who need their barbecue fix. We asked why people are craving barbecue right now—maybe more than usual. “It’s Kansas City. Barbecue is always front and center and remains there during these times,” says Joe’s KC’s owner Jeff Stehney. “In Kansas City, barbecue is comfort food. A Z-Man and fries comfort some, while a slab of ribs and barbecue beans comfort others.”

But since we appear to be in this for the long haul, Joe’s KC is trying hard to keep up with demand.  “We are evolving daily, almost hourly, to adapt to the changes we are encountering,” says Joe’s KC’s VP of operations Ryan Barrows. “Our customers have been great through this transition, as have our staff. We are proud that we have retained 75 to 80 percent of our employees, and our goal is to try and keep as many of our staff employed as possible.” 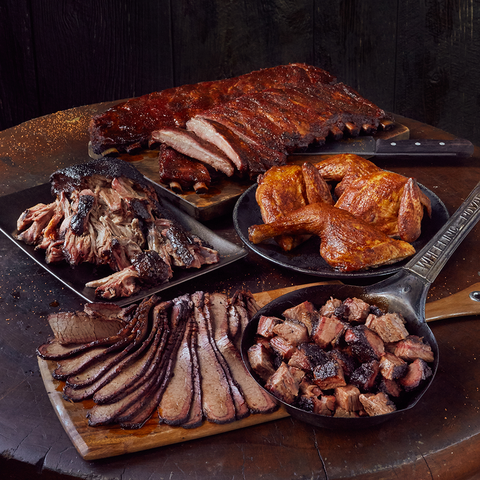 Guests also tend to be purchasing a bit more than usual—probably to feed their army at home for several days. “The idea is that people can make one visit and provide a few meals for their trip,” says Barrows. “I tend to agree that people might be stress eating a little more than usual.” Oh, and—gasp!—Joe’s is now open on Sundays.

Plowboys Barbeque
Despite having two restaurants temporarily closed, Plowboys Barbeque has the luxury of a drive-thru at their Blue Spring’s location that’s open “four hours a day, five days a week,” says Todd Johns, founder, president and chief pitmaster. “Cars wrap around the building every night that we’re open—people are eager for their barbecue and to support a local business.”

Oddly, their biggest seller right now? Their decadent Barbeque Nachos! “Plowboys’ nachos are unique and signature. People crave them,” says Johns. “Virus or no virus, people need their nacho fix.” Apparently, if people are going off their diet they’re doing so with gusto and fervor.

Meanwhile, Operation BBQ Relief—known nationwide for philanthropic disaster relief efforts—will soon start collaborating with Plowboys to help out the Kansas City community during the pandemic. The pilot program—the first of its kind in the metro—is designed to feed the community, keep restaurants from going out of business and help workers stay employed. As of yesterday, meals will be cooked and distributed from Plowboys Barbeque’s Overland Park restaurant at 75th and Metcalf, which temporarily closed last week in preparation for the change in service. “This opportunity to keep cooking is a small answer to big prayers. It gives us hope,” says Johns. The Restaurant Relief Program is expected to roll out nationally in April.

And when we asked why barbecue is the consummate go-to for Kansas City during uncertain times, Johns had a theory. “We are Kansas City—and barbecue sauce flows through our veins. People need barbecue and they want their favorite barbecue joints to survive this crisis,” says the American Royal world champ. “People are seeking comfort food right now for sure. Personally, I’m eating more carbs in a day than I’ve had in two years.” (Editor’s note: Samesies, bud. Samesies.)

Q39
If you thought Q39’s to-go business was busy before this craziness hit, well, now it’s really “taken off,” says owner/chef Rob Magee. “Our online ordering tool, which we launched this past fall, has really picked up and we’re seeing a ton of orders come in, especially on the weekends and Sundays.” 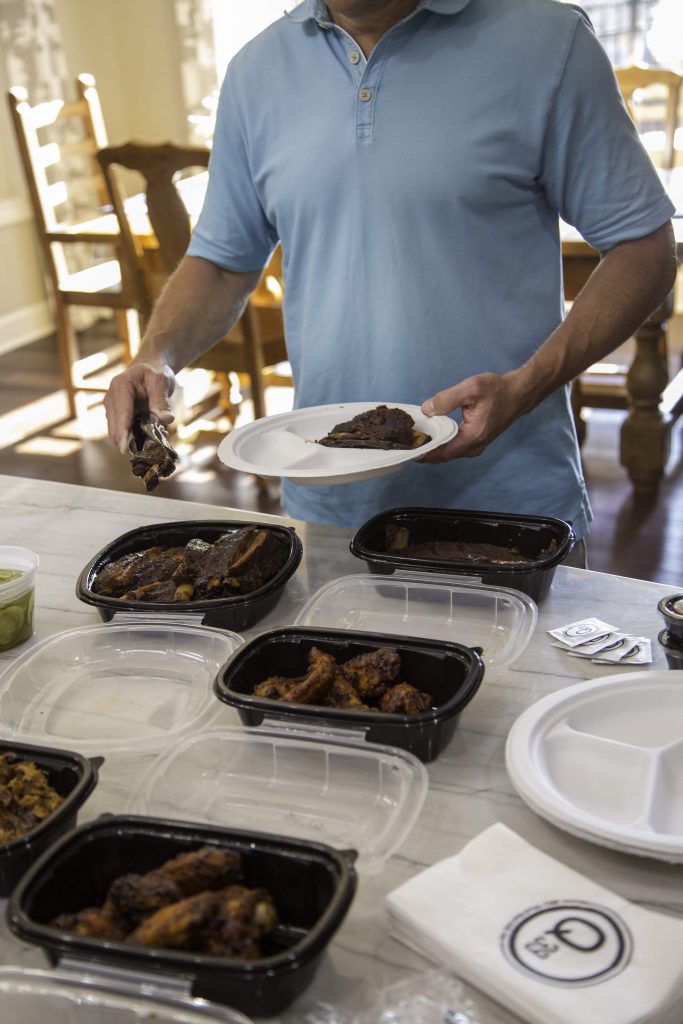 It’s not at all a surprise for Magee as he says because, 1) “barbecue is a Kansas City staple” and 2) “barbecue is always a no-brainer for carryout. It’s super easy to transport and also easy to enjoy outdoors, like in a backyard picnic with your family.” (6 feet apart, people!)

Not only that, but apparently people are eating more barbecue, thus Q39’s newly introduced meal package “has been a hit for families ordering. You pick two meats to go with our three signature sides. It comes with sauces, condiments, plates, napkins and everything, so you don’t even have to do the dishes,” says Magee. “We’ve also sold a lot of ribs lately. Those are always a crowd pleaser.”

Q39 has also been helping out in the community with guests sponsoring Q39 boxed lunches for first responders and the KU Med ICU. “Not only are they supporting the workers on the front lines, they are also supporting our locally owned restaurant and staff by choosing Q39,” says Magee. Also, when we asked Magee if he thought people were stress-eating: “I can say from personal experience, this is definitely true!”

Jack Stack
Oh, snap—Jack Stack is busy! And not just busy at their respective restaurants either. “We worked fast to strike partnerships with over 60 local grocery stores—all of which are now carrying Jack Stack products ranging from beans and cheesy corn to pork spareribs and beef burnt ends,” says Cameron Baraban, who does marketing and PR for the famed barbecue joint. Combine that with the lines packing the restaurant parking lots and side streets—and clearly Jack Stack has the recipe for success. “And for that we couldn’t be more thankful,” says Baraban.

When we asked why barbecue is going more gangbusters than usual, Baraban had a good point. It’s about “offers and experiences that truly reflect their needs during this unprecedented time,” he says. “Is it craveable? Is it affordable? Will it keep well for leftovers? Barbecue checks all of those boxes. Our brick pits remain lit—and the pitmasters continue to cook for one reason—keeping Kansas City fed.”

With a “greatest hits” menu available, it’s been easier for the Jack Stack team “to operate with a smaller offering while still providing our guests with their favorites from the pit,” says Baraban. Weekend numbers are staggering—”which saw us sell over 1,250 slabs of pork spareribs! This last weekend alone we sold over 39,000 Fire Kissed Wings as part of our $20 for 20 Wings + 2 Sides special,” he says. Plus, “calories don’t count during a pandemic, right?”

Not only that, but thanks to a partnered GoFundMe alongside locals B.J. Kissel and Trey McDonald, Jack Stack has helped raise $40,409 (and counting) to deliver as many meals as possible to local healthcare workers. Those numbers translate “to roughly 6,000 meals,” says Baraban. “For every thousand people fed, Jack Stack Barbecue is kicking in another 200 meals on top of that.”