October in Kansas City is a hit-or-miss month for gardeners as produce struggles to ripen in the garden. For cooks who need to use those last little bites of summer, it can be hit-or-miss as well. One of those last little bites in my garden—dependent entirely on the first frost—is okra. Along with the last tomatoes, eggplant, and peppers, it saddens me when the frequently disparaged Southern staple disappears for the season, and I like to use it as much as possible before it is gone.

AKA ladies fingers, bhindi, ochro, gombo or gumbo, the delectable pod most likely originated in Africa or South Asia—some place hot. It traveled to the Americas with the slave trade, and was firmly established and being cultivated in North America in the 1700s. Okra is an extremely versatile plant, with a mucilaginous (some say slimy) quality that people tend to either love or hate. For the unappreciative, the slime factor can be mitigated by cooking the okra with something acidic (tomatoes or vinegar), cooking it quickly at high heat, or cooking it slowly in a large amount of liquid in which it essentially dissolves and thickens the liquid. Regardless of the preparation, the slippery character of okra will still be present in varying degrees.

A number of years ago, I ran across an okra recipe called Texas Hot Okra from local food writer Jenny Vergara. I was intrigued, and much to my delight fell in love with the manner of preparation, which is essentially a stir fry. The most common methods of American okra cookery involve either frying or some version of a stew, such as Creole gumbo. My spicy okra is a very quick sauté, which over the years has evolved to include many variations, from side dish to one-skillet meal with the addition of protein. Today I share one of those variations with you and hope that you will make it your own.

The key to successful execution of this dish is prep. You must have everything cut and ready to go before you begin cooking. Despite the recipe’s versatility, there are a few ingredients that I consider essential and non-negotiable: the okra, spicy peppers, walnuts, and some form of good vinegar (visit my Winter Salad article for details about good vinegars.) The other ingredients tend to be based on what I have on hand and how I plan to use the dish. I am using shrimp in this version because they are quick, tasty, and might make this dish a little more approachable for the okra averse. For your first run through, read the recipe, decide your ingredients, and get all of your prep together. I line things up on my cutting board and proceed as follows:

Preheat the largest skillet you have—12 to 14 inches across if you have such an option. If necessary, use a smaller skillet, but you will have to keep a plate handy to hold partially cooked ingredients while others have their time in the pan. I toast a handful of walnuts in the skillet as it preheats, careful not to burn them, removing them from the skillet before it gets too hot and smokes. Add a generous drizzle of extra-virgin olive oil or clarified butter to the pan and immediately add three to four cloves sliced garlic and about half a pound of large peeled and deveined shrimp. Season lightly with salt—you’re going to be salting with each major addition of ingredients, so don’t go crazy. The skillet should be hot, so the garlic and shrimp will cook quickly. After a minute or two on the first side, turn the shrimp over to cook on the second side. If at any point the garlic looks like it is going to burn, remove it to a plate. After the shrimp have cooked on the second side for a minute or two (they should be opaque on the flat sides but still translucent on the edges), remove them from the skillet with a slotted spoon. Immediately add about half a thinly sliced medium-sized red onion or sliced shallot or two and cook and toss for about two minutes. Push that to the side of the skillet. Add about two cups of thinly sliced okra (cut on the bias so it has more exposed surface area—better for reducing the mucilage and getting more caramelization) and spread it out in the pan so it has as much contact as possible with the hot surface. Sprinkle with salt. Allow it to cook undisturbed for a few minutes, then stir or toss it with the onion and let it cook for a few more minutes. If your pan is too full (meaning you can’t really see the bottom of the pan anywhere), and if the vegetables are steaming themselves more than sautéing, now is a good time to empty the skillet onto a plate before continuing to cook. If you have some nice string or Romano beans (thinly cut on the bias) or maybe summer squash cut into batons, add that to the skillet and toss again. Add—dependent on your delight in spicy food—several sliced jalapeño, serrano, fresh cayenne or other piquant peppers, season lightly with salt, and cook for a few minutes, tossing frequently so that nothing burns. Next add halved cherry tomatoes (or similar-sized chunks of large tomato) and cook briefly so they are heated all the way through. Now return all of the ingredients you have cooked, including the toasted walnuts) to the pan, add about a ¼ cup sherry (or other) vinegar, and toss for a minute (maybe two) until everything is steaming and hot and the shrimp are cooked (crunchy, not rubbery/overcooked). Taste a bite of something and adjust the seasoning as necessary. Serve immediately. For a fun variation, use a little soy sauce (or even better—coconut aminos) and rice vinegar and a handful of chopped cilantro and/or scallions added at the last second. Alternate proteins like diced grilled chicken, crispy tofu, or shredded leftover pork roast can be used in place of the shrimp. Just be sure to take advantage of the last offerings of the growing season—especially the okra. 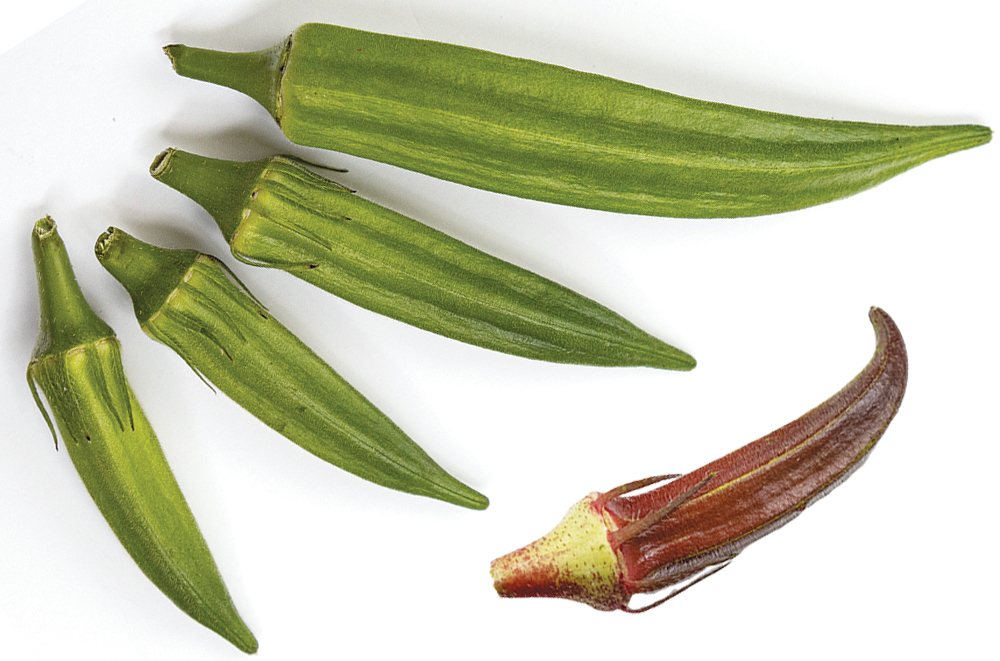 A few things to know about shrimp:  Kansas City is a long way from the sea. “Fresh gulf shrimp” don’t really exist here unless you’re willing to pay a small fortune, and a reliable retail purveyor is not easy to find. Shrimp should be purchased frozen, either in a block (the most economical, and probably still in their shell), or in bags IQF (Individually Quick Frozen), usually peeled or partially peeled and deveined.  Deveined refers to the removal of the digestive tract that runs down the back of the shrimp which can contain bits of sand and grit.  Some stores sell shrimp thawed (look for the little sign that says previously frozen)—but how do you know how long they’ve been that way? Your nose is a great indicator—any off-putting odors are a definite sign to avoid those shrimp. The numbers by the word shrimp indicate how many there are in a pound. The lower the numbers, the larger the shrimp and the higher the price. Here are a few varieties that can be found in our area.

Easy Peel White Shrimp 8–12
The “Easy Peel,” sometimes “E-Z Peel” indicates that shrimp are exactly that—easy to peel. The shells have been split down the back and the vein removed which makes it really E-Z for the cook.  Buying them IQF allows you to use just the number you need without having to thaw the entire package. White shrimp tend to be tender and sweet even at this size. Eight-to-12-sized shrimp are considered “colossal,” and are colossally expensive.  Perfect for your next shrimp cocktail when you want to impress that special someone.

Shell-On Blue Shrimp 16–20
A great all-purpose shrimp, the size (jumbo) is easy to cook without overcooking. From the western coast of Mexico, these flavorful crustaceans have a snappy, crisp texture. Look for shrimp that are sustainably wild caught and Fair Trade Certified for the least negative impact on the environment and fishing communities.

Peeled-Deveined White Shrimp 51–60
Great for cooks in a hurry, these little guys thaw in just a minute or two under running water and can be cooked in an equally brief amount of time. Black Tigers are another tasty variety, frequently found in this same useful size (or as 41-50s), that make a sweet and crunchy addition to your next pasta or stir fry. Just be careful not to overcook. And avoid “pre-cooked” which are generally overcooked.