During my childhood, radishes were frequently on the table in the spring, but for some reason I never paid them the slightest heed. They were grownup food, relegated to a relish tray along with deviled eggs, green onions, carrot and celery sticks, pickles, and other foods undeserving of my attention. I remember my father salting them, and the sound of the crunch when he ate them. I wasn’t interested. It wasn’t until years later, during a stint cooking at Chez Panisse, where baby radishes frequently graced the table, that I realized what I had been missing. Radishes are delicious! When freshly harvested, their delicate pungency and crisp bite can make the perfect beginning to a meal, priming the palate for more delicious things to come. But wait—there’s more.

The first time my mentor, Lidia Bastianich, mentioned cooked radishes, my only thought was “you can cook radishes?” Who knew? Radishes alone, or with butter, or in a salad, sure. But cooked—it had simply never occurred to me. I don’t think it occurs to other people, either.

I now adore radishes and grow them as often as our Kansas City seasons will allow. They are relatively simple to cultivate, and always bring a moment of childish delight when pulled from the earth—you never know exactly how big they’re going to be. But I now know that the radish can assume numerous roles in the kitchen, and I would like to share some simple preparations with you. 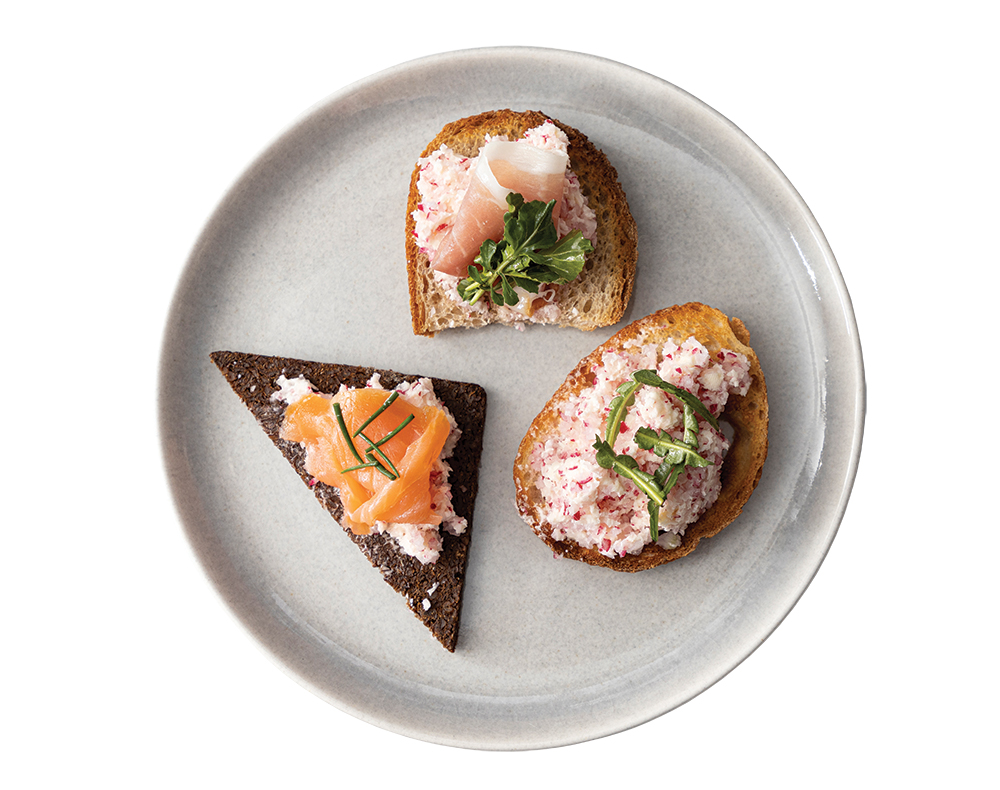 For an easy hors d’oeuvres, a pretty and versatile toast topping is Radish Butter. It’s extremely quick to prepare with a food processor. Begin by washing about a dozen radishes, removing the root and top ends, and if large (for a radish), cut them in half. Place the radishes in a food processor and pulse a few times to achieve a relatively uniform size of chopped radish with no large chunks. Add a softened stick of butter to the bowl as well as a generous pinch of salt, and pulse until a uniformly red-speckled consistency is achieved. More or less butter may be used depending upon the desired richness and texture. The spread is delicious on its own with a garnish of flaked or smoked salt, but may be used as a foundation for any number of toppings like smoked salmon, prosciutto, hard-boiled egg, or fresh herbs or sprouts. A few drops of lemon juice are also welcome. 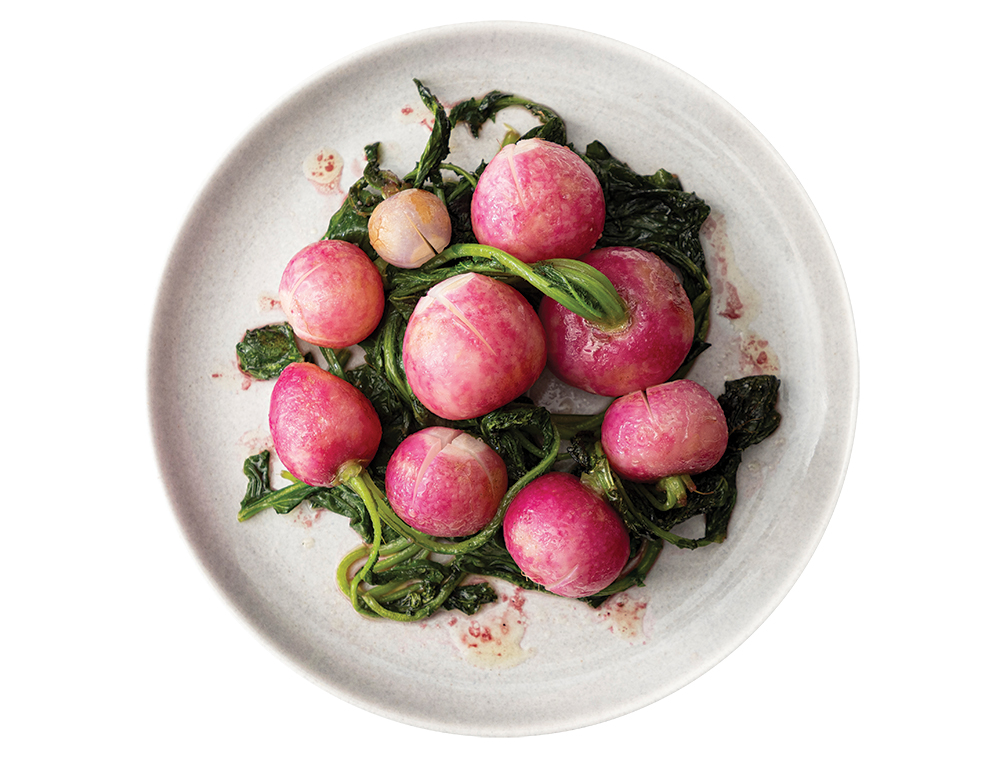 As for cooking radishes, think of them as red turnips that cook quickly. And as with turnips, the greens are delicious, too, like delicate spinach. One of the simplest ways to enjoy them cooked is a Radish Sauté. Thoroughly rinse radishes with their greens attached, four to five per person. Remove any yellowing or damaged leaves and discard. Trim the root end, then cut an X in the bottom of the radish about ¼ inch deep—this will help the radish to cook more quickly and evenly. Preheat a skillet to medium, toss in a few tablespoons of butter or a splash of extra-virgin olive oil, then add the radishes with their greens. Roll them around a bit, then add a quarter cup of water and cover, allowing them to steam for about five minutes. Remove the cover and roll them around again, adding a sprinkling of salt and pepper and a knob of butter. Serve warm. The idea is to cook them just until they transition from being hard and crunchy to just tender but still firm. They can also be roasted with other root vegetables or coarsely mashed. 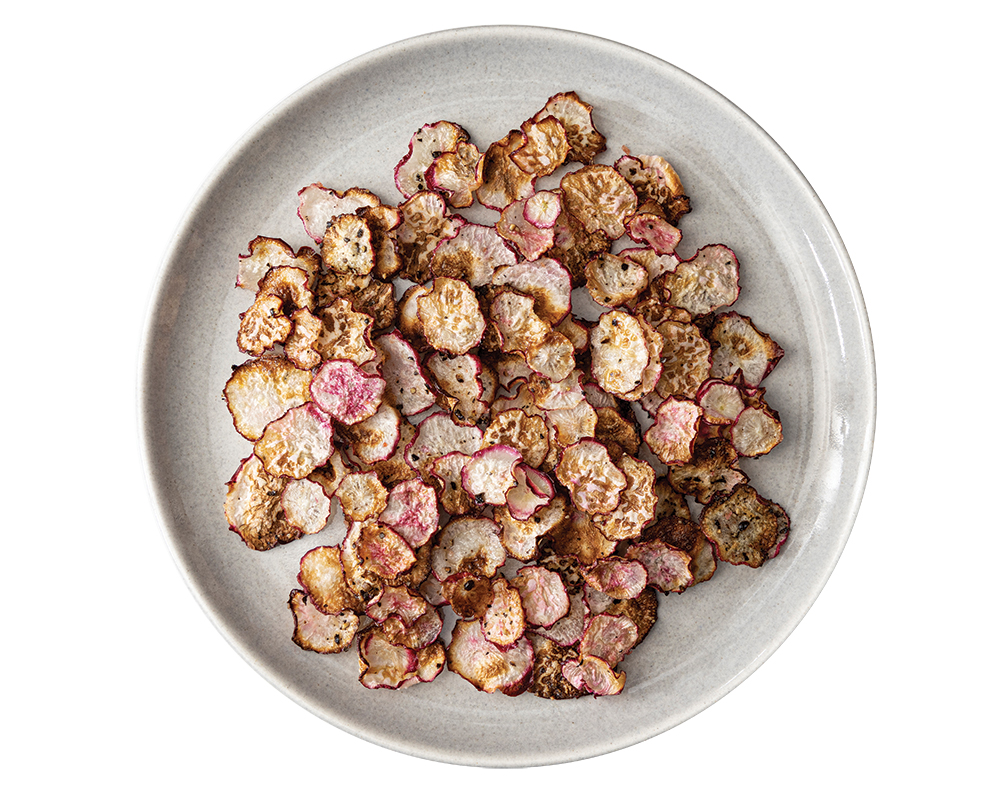 If you happen into an over-abundance of radishes, Radish Chips are another option. Slice radishes thinly and as uniformly as possible (a mandolin makes quick and easy business of this). Toss the slices in a light drizzle of oil and spread them in a single layer on parchment. Sprinkle lightly with salt and a few grinds of fresh black pepper. Bake them in a low oven until crisp. Keep an eye on them, because they can quickly turn from little red and white coins to brown (but still tasty) chips. A dehydrator makes the best version of this but requires much more time and patience. However you decide to prepare them, make a lot because they shrink considerably when cooked and are easily consumed by the handful. Note—they are surprisingly piquant.

Whether you enjoy them like the editor of this magazine mentioned to me in a discussion of the subject matter, “White bread, lots of butter, paper-thin slices of radish. How’s that for a no-recipe recipe?” Or like my father’s radishes with salt, by all means savor them. But don’t let that be the only way you relish the radish. 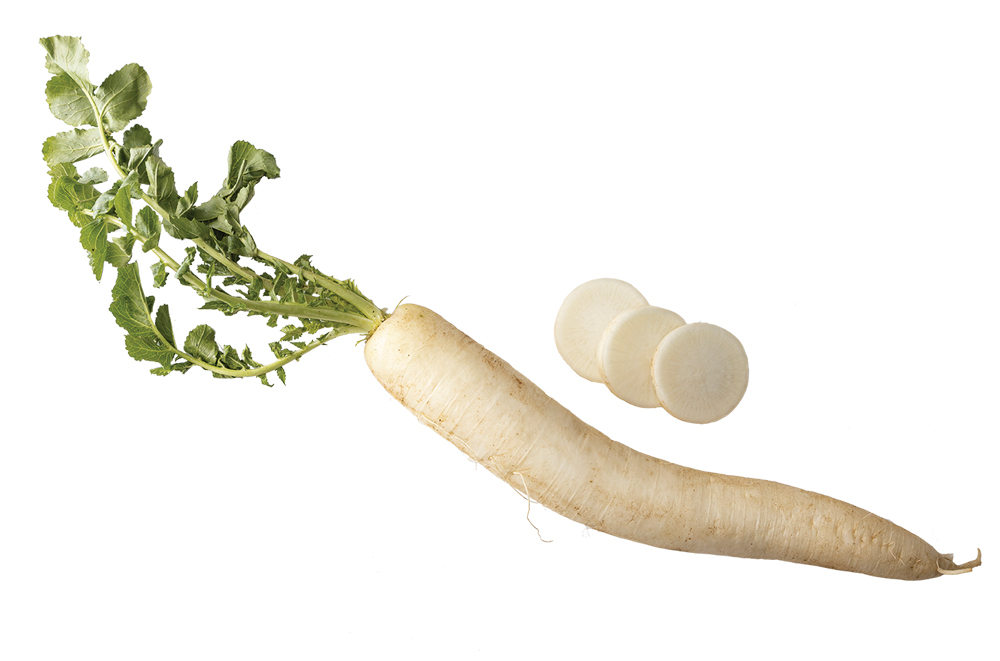 Daikon
The most popular and familiar of the Asian radishes, it is extremely versatile, mild, and extremely crunchy. Although it is wonderful in its raw form, it makes an equally refreshing pickle. Daikon excels at being a “cracker” for any number of toppings. Just don’t keep it too long—it certainly doesn’t improve with storage. 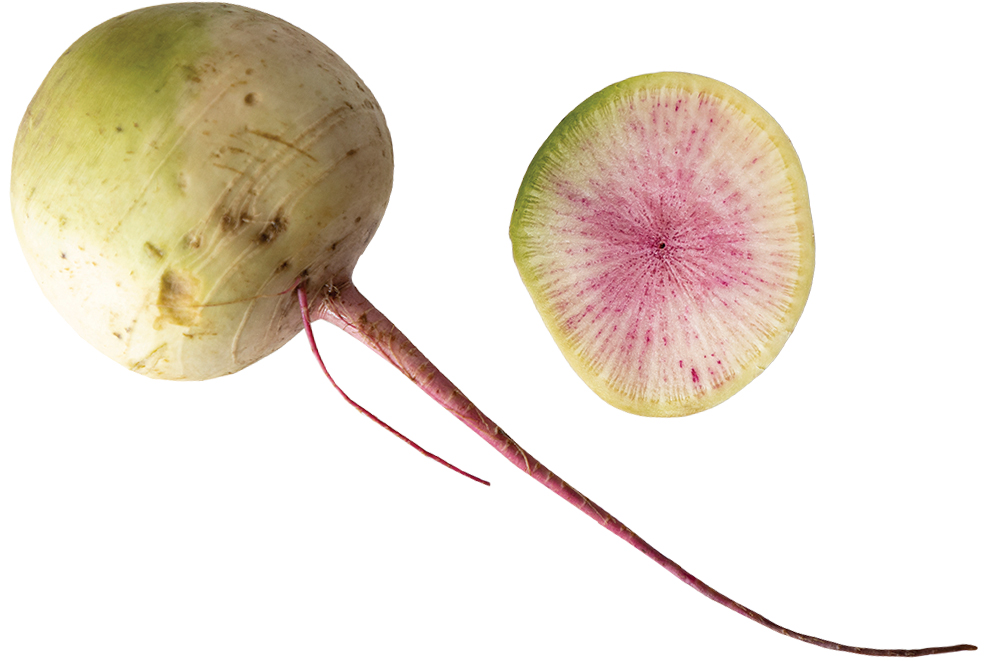 Watermelon Radish
A favorite of chefs, valued as much for its striking color as its crispy-leathery texture, this Daikon relative tastes nothing like watermelon. When cooked, it tastes like rutabagas or turnips, but loses its visual appeal. It excels in salads or slaw with fish where the colors are at their best. When shopping, look for heavy specimens to help ensure freshness. 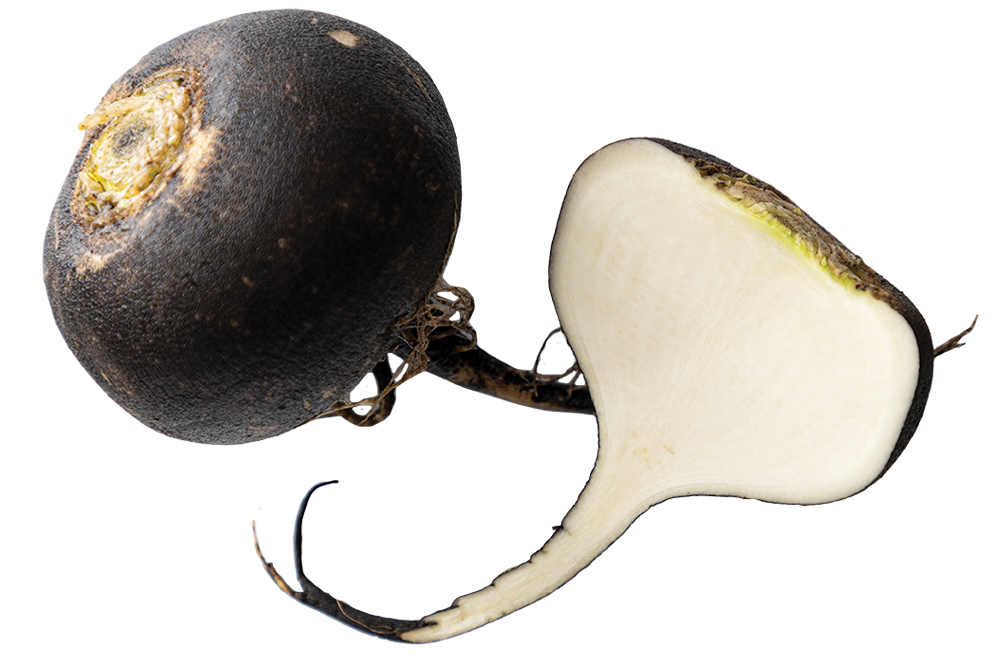 Black Spanish Radish
The most intense (some would say harsh) of the radishes, it is firmer and drier than either Asian or European varieties—more like horseradish. Slice, shave, or grate and soak in water to mellow before using raw; or mix with butter, schmaltz, or other fat before spreading on bread. They store well and for extremely long periods of time.