“So is it like an apple or a pear?” That’s the question I hear most frequently when I introduce someone to quinces. Its appearance, something between a misshapen apple and a gnarly squat pear, leads to that assumption. While quinces are in the same family as apples and pears (and plums, cherries, and almonds), they taste nothing like either, are rather tough to cut, and are extremely tannic and essentially inedible when raw. Quinces do have a deliciously striking scent—a few of them sitting in a bowl on a table will perfume an entire room. But when slowly cooked, the fruit is transformed to a delicate yet resilient velvety mouthful, similar to a poached pear, but with an altogether different flavor and a haunting scent. And they are a little furry. So to simply compare them to another fruit—well, it’s complicated.

Quinces are a very old fruit, so old in fact that some theologians suggest it as the fruit that tempted Eve in the Garden, and it is often depicted as such in medieval paintings. They originated in western Asia and are common in those cuisines but have long been popular in Europe and were once more common in the U.S. Over the past century they have fallen out of favor in much of the country due their susceptibility to disease but are slowly returning to popularity. It can be a handsome plant, if a bit unpredictable in its growth habit. In the spring they are covered with beautiful flowers, much like a cherry tree. I have grown several varieties over the years but they all eventually succumbed to one virus or the other, most likely due to my fungal-prone microclimate. I now leave their cultivation to professionals in more amenable climes.

I fell in love with the romance of the quince and its foreignness years before I first tasted one and sampled its enticing aroma. When I finally had my first exposure it was a revelation. The fruit is pale green fading to golden when ripe, and the aforementioned fuzz easily rubs or washes off. They have a flavor (and scent) I can only describe as floral and somehow pleasantly old fashioned. Quinces have a very high pectin content and are perhaps most commonly used to make membrillo (its name in Spanish), a fruit leather commonly served with cheese. It is also useful for making savory preserves—I use them for cranberry-quince chutney every Thanksgiving to accompany the turkey or other roast meats. But for me, they excel in desserts. Deciding whether or not to eat quinces—it’s not complicated.

This is really a recipe for two compotes—poached quince and a poached pear and dried fruit compote that are then combined. Both are delicious and variations are endless.

In a small pot, begin by combining a few quinces, peeled and quartered, with two cups of water, a cup of sugar and a half a vanilla bean (optional, but delicious). Don’t bother trying to remove the core from the quinces at this stage because it’s like trying to cut leather and after cooking it will be much easier. Simmer the mixture, covered, for about two and a half hours—yes, really. It doesn’t take that long for them to become tender, but it does take that long to turn a lovely shade of sunset rose (cooking the fruit in a sugar syrup causes the tannins mellow and form anthocyanins/pigment). If you fear at any point that the quinces might cook dry and scorch, add a bit more water. Meanwhile, in a larger pot, combine four cups of water, two cups of wine (you’ll need the rest of the bottle to drink while the quinces cook), zest and juice of a lemon, and one stick of cinnamon and bring to a simmer. Add about four firm but ripe pears, peeled, halved or quartered, and cored, to the simmering syrup and cook for 15 minutes. Add about two cups of dried fruits, your choice (see In the Pantry) to the pear mixture and turn off the heat. Allow the dried fruit to rehydrate and cool while the quinces continue to cook. When the quinces have turned an alluring shade, turn off the heat and allow them to cool in the liquid. When they are cool enough to handle, one by one remove the quince quarters from the syrup, cut out the cores (discard) and slice the quinces into smaller pieces—but not too small. You want to be able to appreciate their quince-ness. Add them to the pear mixture and strain the pink quince syrup into pear mixture as well. Serve as desired. I like to serve the compote warm, like a soup, with a big scoop of homemade vanilla ice cream melting into it, or with a rice or bread pudding. The compote is also quite refreshing served cool, perhaps with a dry crumbly cake that can soak up the juices. A friend of mine uses the liquid as a steaming, comforting tea, and any leftover syrup can be reduced and used as an elegant dessert sauce, glaze, or sweetener for hot or cold tea.

Dried Fruits
Especially handy in the winter but great to have in the pantry all year long, dried fruits are extremely versatile and delicious. The next time you’re in the grocery store, grab a variety to keep on hand.

Raisins
The most common dried fruit in the U.S., dried grapes come in many colors and sizes—like grapes. From the standard dark brown raisin to golden raisins (aka Sultanas), plump flame raisins to tiny currants (little dried Zante grapes), try adding these to your next apple pie for a boost in complexity and texture. Soak them briefly in good wine vinegar and add to your next salad for a chewy burst of flavor.

Dried Plums
Formerly known as prunes, these tasty, if much maligned, morsels are wonderful poached and served over ice cream or with a crumbly cornmeal cake. If you have patience, put a big jar of these covered in bourbon—or better yet, Armagnac—in the back of the pantry for about a year and then enjoy an absolutely delicious treat straight out of the jar (or stuffed inside a roast pork loin). 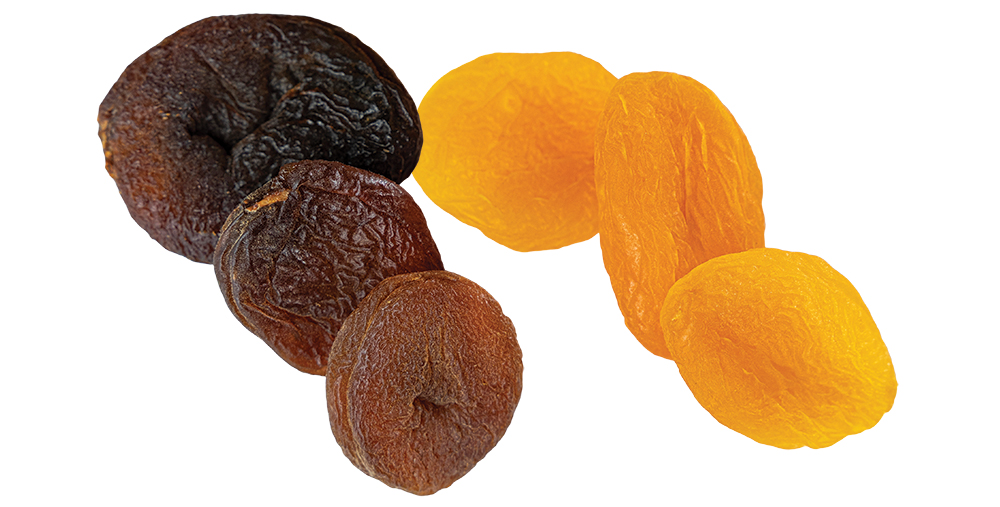 Apricots
Just about everything goes with apricots, making dried apricots super convenient for an added sweet-and-sour burst of flavor. Sulfur dioxide is added in the drying process to maintain the bright orange color and keep them more tender, but they are also available unsulphured—and brown. Both varieties are delicious eaten out of hand, rehydrated in compotes or dipped in dark chocolate. For a savory twist, try adding to braising meats for a hint of fruity sweetness.

Tart Cherries
Dried cherries are not all the same. Sweet cherries can be a bit on the insipid side, but tart cherries, aka Montmorency cherries, are loaded with flavor. Delicious in salads with grains and nuts. They also rehydrate beautifully with a splash of brandy for an impromptu ice cream topping.

Figs
Fortunately for those of us who live outside of fig growing territory (the Midwest gets just a little too cool), dried figs can be equally delicious (if not quite as sensual) and are available year around. Poach them with a little sugar and balsamic or other fruity-ish vinegar and purée them to make a wonderful spread for crackers and rich cheeses like camembert or brie. Black Mission figs are pictured here, but white and brown dried figs are also readily available.