I don’t have nostalgic pumpkin pie memories. I was a finicky eater as a child—some things don’t change—and pumpkin wasn’t a particular favorite in our household, so I had very little exposure. As an adult, and in my time as a chef, my appreciation of the versatile winter squash has increased substantially. Sometime in the past two decades, I learned to love pumpkin pie.

For several hundred years pumpkins have graced the harvest tables of America, although not necessarily in the present day form of pumpkin pie. The pumpkin is native to North America where it thrives, but was readily adopted by the French and then introduced to the English during the Tudor period when England had an extreme fascination with pies of all types, both savory and sweet. As for its appearance at the first traditionally recognized Thanksgiving in 1621, it most likely wouldn’t have been the sweetly spiced confection in a wheat-flour crust enjoyed today. It would have probably been in the form of a soup baked in the pumpkin shell or possibly a bread. Spices were added when they became more available from New World sources, as well as sweeteners, such as honey and molasses and eventually cane sugar. By the late 1700s, pumpkin pie had established itself in a form that would be recognizable to us today.

The technique for fabricating a traditional American pumpkin pie is pretty standard: a typical pie crust is filled with a mixture of cooked pumpkin puree combined with eggs, some form of milk (evaporated or condensed being the most common), and spices. Some are stabilized with a bit of cornstarch or flour. The countless variations—and claims to superiority—come from subtle differences in ratios and spice combinations. To each his own. Here is my current favorite rendition.

First things first—the crust for the pie should be partially baked or “blind baked” before being filled. One of the biggest complaints about pumpkin pie is the sog factor in the crust. So please par-bake the crust—about 30 minutes at 425°F with pie weights or a piece of parchment and dried beans holding the crust in place, then weights/parchment removed for another ten minutes. And if you really want to ensure bottom-crust integrity, lightly brush interior of the par-baked crust with egg white the moment it comes out of the oven, then allow it to cool before filling. Doing so creates a more waterproof barrier to the filling. As for making a decorative crust, visit Pinterest and let your imagination run free. Just remember that pumpkin pie needs to be an open faced pie because of the moisture factor (you will notice that the surface “sweats” a bit over time as the pie sits). I like to reroll and use any crust scraps to make leaves or braids or pumpkins or whatever to decorate. If you are going to put them on the surface for garnish, wait to do so until right before displaying or serving. The moisture from the pie filling will eventually cause them to lose their crisp texture and darken making them less-than-Martha-Stewart material.

As for the filling, use canned pumpkin puree–not to be confused with pumpkin pie filling. Pumpkin has a high water content, and the trouble and time it takes to roast or steam the pumpkin, remove it from the rind, puree it, and finally drain the excess moisture is simply not worth the effort. If you have unlimited free time and a garden full of pumpkins to use up, be my guest and work yourself silly. For the filling for a 9-inch pie pan: one can (fifteen ounces) pumpkin puree, 3 large eggs, one can (12 ounces) evaporated milk, ¾ cup packed brown sugar, vanilla extract, and spices. My favorite combo is ground cinnamon and ginger (3/4 to 1 teaspoon each), freshly grated nutmeg, and a big pinch of ground cloves. Mace and allspice are also used in many recipes as is “pumpkin spice” or “pie spice” which is simply a premixed blend of the previously mentioned spices. When making the pie for the photo, I was inspired by the now ubiquitous “pumpkin spice latte,” so I infused the evaporated milk with coffee (¼ cup of ground coffee steeped in the warm milk for about 30 minutes then strained out, grounds discarded). It adds a subtle complexity to the pie and the little bit of extra caffeine can’t hurt after a big holiday meal. To bake the pie, lower the temperature to 325°F. Bake the pie for about one hour until most of the filling is set but the center is still a bit jiggly. Cool the pie on a rack for several hours then in the refrigerator for several more. The lower baking temperature and long cooling time help eliminate the dreaded sweating and cracks that can happen on the surface of the pie. And if it does crack—well it will still be delicious (and you could always cover cracks with some of those decorative bits of dough you baked for garnish).

A few notes about serving pumpkin pie: Bake your pie the day before Thanksgiving so it will have time to set overnight. I like it best served chilled. And it has to be served with lightly sweetened whipped cream.

In Your Pantry: Holiday Spices 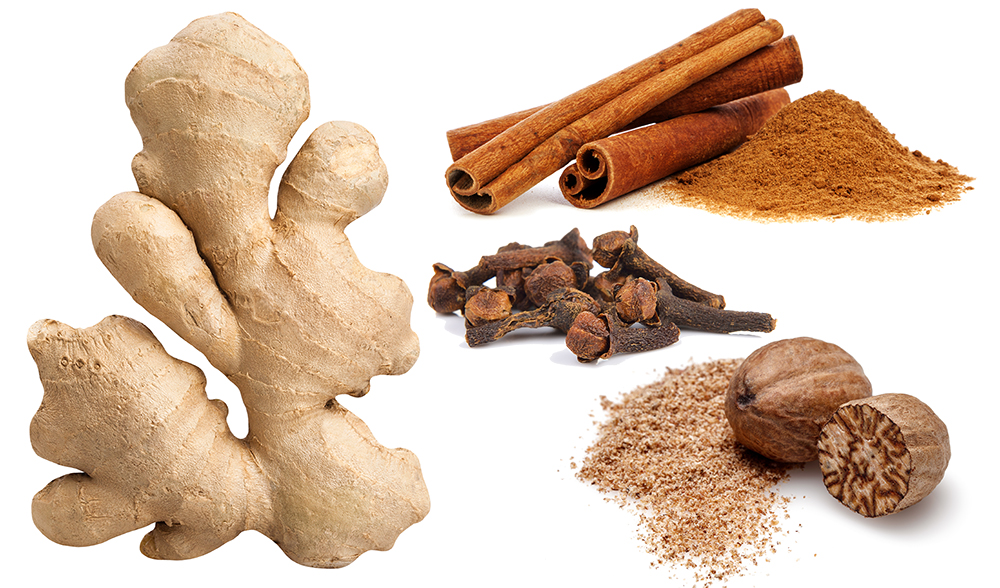 Ginger
This aromatic rhizome (underground stem), indigenous to southern Asia and the Pacific islands, is used both fresh and dried. Spicy—even hot—with hints of pepper, clove, cedar, and mint, this flavoring is one of the most important baking spices. Loaded with antioxidants, it also makes refreshing beverages like ginger ale and ginger beer.

Cloves
A little goes a long way with this highly aromatic bud of a tree native to the Spice Islands. The penetrating aroma and sweet taste have notes of bitter almond and vanilla, but no other spice has the characteristic “clove” aroma. In addition to sweet holiday baking, try it in mulled wine, with glazed carrots, or in the classic meat ragu from Bologna.

Cinnamon
One of the oldest spices known to mankind, this sensuous, warming seasoning is ubiquitous during the holidays. The scented bark of an evergreen tree native to India and Sri Lanka is the source for the essential oil that gives cinnamon its aroma and flavor. In addition to baked goods, cinnamon makes a delightful and surprising seasoning for meats and savory dishes in many cuisines.

Nutmeg
Widely cultivated in many tropical regions of the world, this dried seed-like kernel of the fruit of the evergreen tree Myristica fragrans is at home in more than just holiday dishes. Try it with cheese, especially fondue, cheese ravioli fillings, soufflés, and any place you use winter squash. Eggnog wouldn’t be the same without it. Always buy it whole and grate it as needed.

In Your Cocktail: Drastic Measures