Unless you grow your own and are a bit of a fanatic about them, fava beans can seem an extravagance. Although it’s an ancient bean and staple in Mediterranean and European diets, here in the Midwest—in much of the U.S., for that matter—they are still relegated to fancy restaurants and the kitchens of foodies. I first encountered them some 20-plus years ago in one of those fancy restaurants in California. But it wasn’t until the last few years while growing my own and cooking them at home—as opposed to using them in a restaurant with a contingent of cooks to prepare them—that I really came to appreciate and understand them.

For gardeners, favas make for a good winter indoor gardening project right when you want to be outside, but the weather won’t permit. I start mine in early February (at the same time I start artichokes) under grow lights—they need the warmer indoor temperatures to germinate but are extremely cold tolerant. Gardeners a bit further south can start them in the fall and overwinter them, but our Kansas City winters are simply too unpredictable and occasionally extreme for this to be a reliable method. As soon as the soil can be worked, I move the tiny plants into the garden to establish roots, even if they don’t show much top growth, and cover them with a light insulating fabric for the next few months. From that point on, they require little attention other than possibly being staked—they can easily grow to a height of four feet. Sometime in early May they begin producing lovely, fragrant, butterfly-shaped black-and-white flowers, which will then turn into rapidly growing pods that can reach up to 12 inches in length. For the impatient (and the hungry), the smaller leaves and flowers can be eaten either raw in salads (they have a slightly sweet, nutty green flavor like pea shoots), used as garnish on hors d’oeuvres, or quickly sauteed like spring greens. And that is just the beginning of their versatility.

Fava beans have three relatively distinct stages of life and styles of usefulness in the kitchen. Most people, especially restaurant cooks who generally dread the labor-intensive bean, are familiar with the mature stage of the fava—the stage in which they have to be removed from their fur-lined pods, then blanched, then peeled before you even begin to actually cook with them. A large pile of whole pods turns into a tiny pile of peeled beans. That stage of naked bean, the beautiful, glossy, bright green easily recognizable form, is the one people think of first. Those are the beans we see tossed in salads or featured in mixed spring vegetable ragouts, or perhaps served peeled and raw with young pecorino cheese and a chilled white wine. This is the stage where they can be featured in pasta sauces or ravioli fillings or braised alone or with other spring vegetables like peas, leeks, and green onions—a useful technique to extend their volume.

Certainly, their least appreciated stage of development is their youth—beans about the size of a big middle finger, up to longer pods that don’t have well-developed beans in them. At this stage, a scorching sear in some olive oil or a few minutes on the grill is all that is needed to create a fresh and complex vegetal flavor with intense savoriness that I can only compare to charred scallions mixed with braised greens and the sweetness of fresh peas.

The final stage of development is one of starchiness. The beans, once shelled, peeled, and cooked for a substantial amount of time, dissolve into a hummus or mashed potato-like paste that is quite delicious served warm or cold. The beans are dried in the older, starchy form (either peeled or unpeeled) and will keep indefinitely in storage (see In the Pantry for more details and tips for use). Regardless of the stage of maturity, I encourage you to explore the fava.

If you grow your own, it is extremely interesting (and easy) to prepare favas in different ways and serve them at the same time. One of my favorite methods for very young and tender whole beans (you shouldn’t feel anything larger than a fingernail inside the pod) is to grill them. One at a time, grab them by the stem end and pull down, removing any stings that may be forming along the seams. Toss the cleaned pods with olive oil (or duck fat!), a little crushed red pepper and an herb like sage, rosemary or thyme. Place them directly on a moderately hot grill or under a broiler and cook for several minutes on each side until they have lots of lightly charred bits and become more tender. Serve hot or at room temperature sprinkled with flaked salt. A squeeze of lemon over the top is nice, too.

Fully developed favas need to be shelled (I like to pop them through the shell rather than open the shell and slide them out—in kitchen contests of speed, we have found this to be the fastest method). Smaller beans can be used as is, but if the skin on the bean has turned grayer and is wrinkled, the skin will be tough, and they need to be peeled. To do this, drop the shelled favas into boiling water for about 30 seconds then remove them to a bowl of ice water to stop the cooking. Next, with the tip of a fingernail, nick the corner of the bean and with a little pressure, squeeze the brilliantly green bean out of the skin. Whatever you do with the bean next, you want people to see it, because you’ve invested all of that effort into the dish. I like to showcase them in a salad composed of their fresh, tender green leaves, toasted almonds, and shavings of a salty or nutty cheese, such as an aged gouda or young pecorino. To extend the salad, fresh peas, chives, and other greens make a nice addition. Dress the salad with wine vinegar or lemon juice and extra-virgin olive oil.

An interesting fava bean spread can be made with cooked, peeled beans (frozen favas work for this too, as well as the addition of some frozen peas to extend the amount of favas you have). Set aside a few of the prettiest, tiniest beans for decoration. In a small pan, briefly sauté a few cloves of sliced garlic in a generous amount of olive oil, then add the favas, a splash of water, some leaves of mint, and cook, covered, stirring occasionally for about five minutes—longer if it is a larger quantity of beans. Allow it to cool, then purée the mixture and adjust seasoning with salt and pepper. Spread it on crostini and garnish with olive oil, mint, and a few of the reserved fava beans. Other garnishes like cubes of halloumi cheese or poached shrimp would also be welcome. Serve as part of a selection of appetizers and enjoy.

A note of caution on fava beans: People with the rare genetic disorder of a G6PD deficiency should avoid eating fava beans as it could result in hemolytic anemia. This happens almost exclusively in males of Mediterranean, African, or Sephardic Jewish descent, with the most severe reaction happening in children. If you experience symptoms or discomfort after eating fava beans, you should be tested for this condition. Fava beans can also react with some antibiotics, antipsychotics, and antidepressants, so avoid eating them if taking any of those types of medications.

If fresh fava beans aren’t available, out of season, or if you’re looking for a shortcut, try one of these preserved types of bean. By the way, the British call them broad beans, which can complicate shopping if you don’t know what you’re looking for. 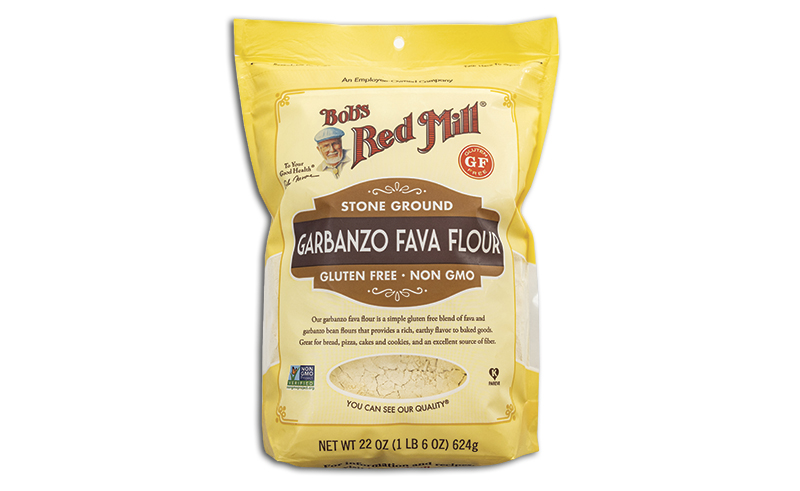 Fava beans that have been dried and ground into a flour have found great popularity with the gluten-avoiding sect. It is most often found mixed with garbanzo bean flour and is marketed to use as a wheat flour substitute. It can also be used to thicken and add a luxurious texture and nutty flavor to soups as well as make the traditional farinata flatbread. Available in most health food and gourmet grocers. 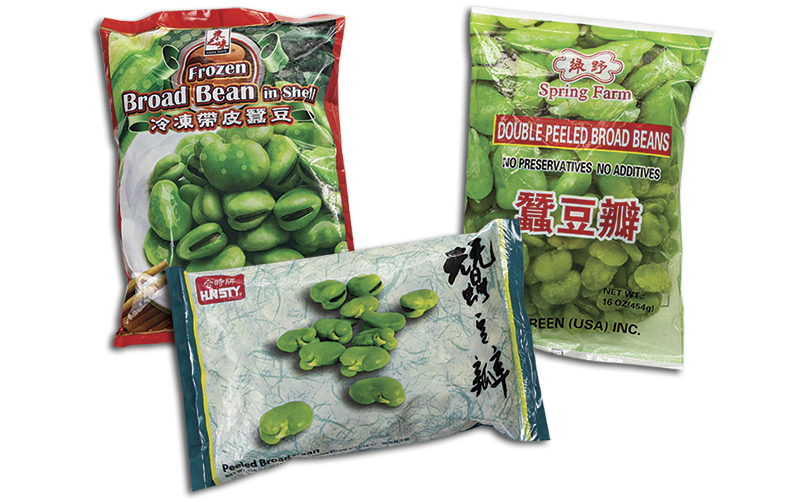 Don’t feel like shelling, blanching, and peeling fresh fava beans? Frozen peeled favas are a great time saver and are especially useful for making bean purees. The flavor is milder than that of fresh beans and the texture is less distinct, but for speed they can’t be beat. Great for stir fries and quick pasta sauces. Available in peeled and unpeeled versions, so be sure to look for the peeled variety if speed is your goal. Available in most Asian grocers and fancy food stores. 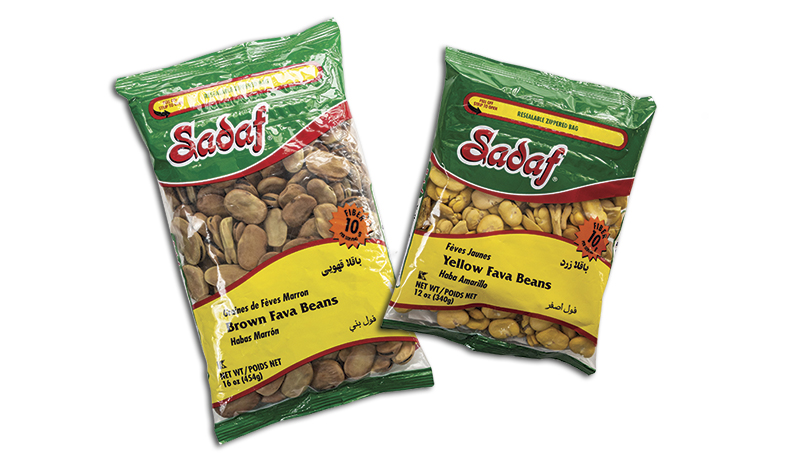 A staple of many ancient diets, dried fava beans have provided nourishment during the lean times when other crops failed or were unavailable. They also happen to be delicious. They are at their best when cooked simply with water, olive oil and a little salt, and mashed into a purée-like hummus. Serve warm—or chilled and sliced—with flatbread and spicy greens. They come peeled (usually creamy tan or yellow, and easier to process) and unpeeled. The unpeeled beans (dark tan to brown) are frequently cooked, dressed with oil and herbs, and served as a snack or appetizer—being peeled by the eater. Available in Middle Eastern and southern Mediterranean markets.