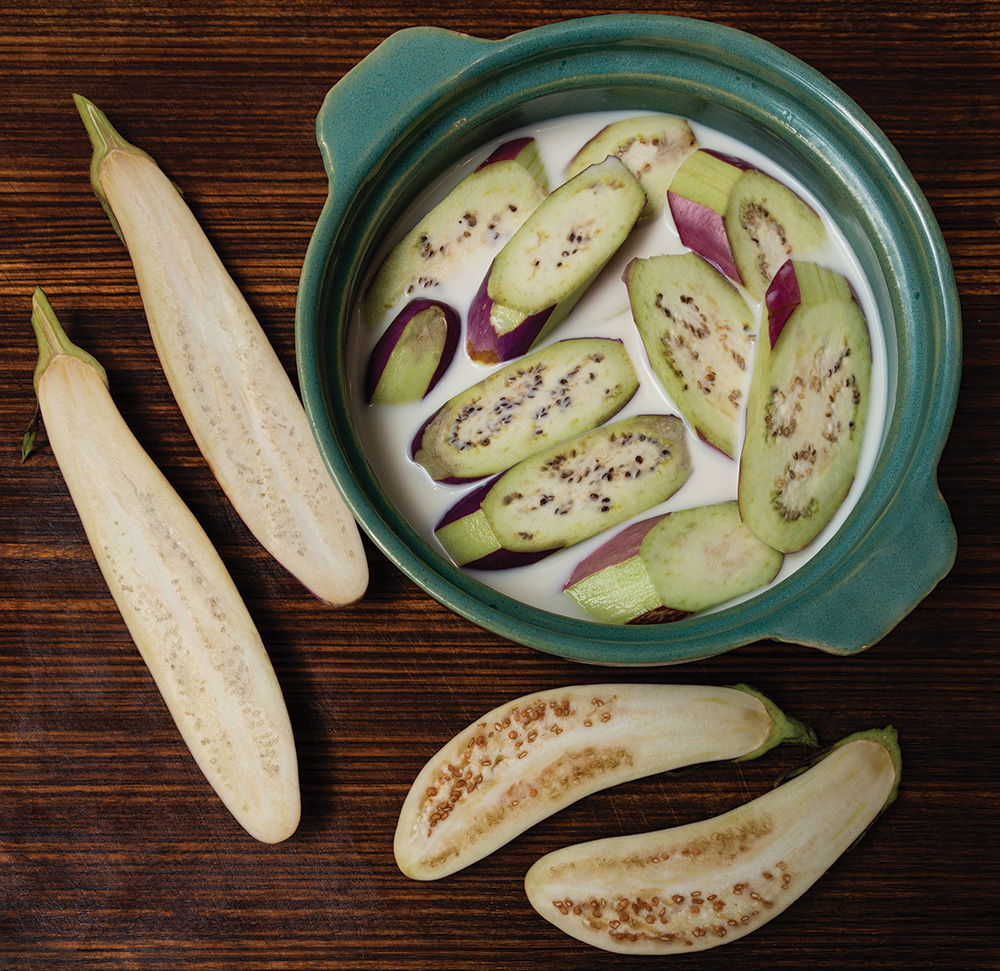 The end of the growing season in Kansas City brings challenges and rewards to gardeners and cooks. What do you do with the stragglers in the garden—those last grape tomatoes that want to ripen but can’t, the eggplants that are probably a little too mature (and bitter), the herbs that you can’t stand to see go to waste? Here’s my solution for just this conundrum.

First, the flavor-challenged tomatoes. One way to enhance the essence of less-than-ideal tomatoes is to roast them. By removing some of the water from the tomato, it concentrates the flavor and provides an opportunity to introduce other flavors like garlic or herbs. Roasting is also a great way to improve grocery store “winter” tomatoes that—although beautiful—are totally lacking in every other way. And for the eggplant—try slicing and soaking it in milk, ideally for about 24 hours. Recipes often suggest salting eggplant to remove bitterness (the dark liquids that come out of salted eggplant carry a lot of the bitter tannins from the seeds), and that technique contributes wonderful seasoning to the eggplant. But soaking in milk with a little salt has the added benefit of endowing an almost creamy, custard-like texture to the eggplant, and it seems to keep the eggplant from absorbing as much oil when cooked. The addition of a flavor enhancer like soy sauce takes the savor to another level thanks to its naturally occurring glutamate content (a natural flavor enhancer). In the Mediterranean, they would use anchovies, another source of glutamate, to the same effect. If the meal I am preparing is more in the Mediterranean vein that’s what I would use, but if the food is more Asian, or “anything goes” American, I would use soy.  (See below for some recommendations.) Good quality wine vinegar or apple cider vinegar can have a similar effect. Again, I want this to be your recipe to utilize what you have available, be it from the farmers market or your own back yard.

And as for the rewards at the end of the growing season? Well, as Thane Palmberg, an old farmer friend told me when I asked him what he did in the winter—“that’s when you get to rest.” 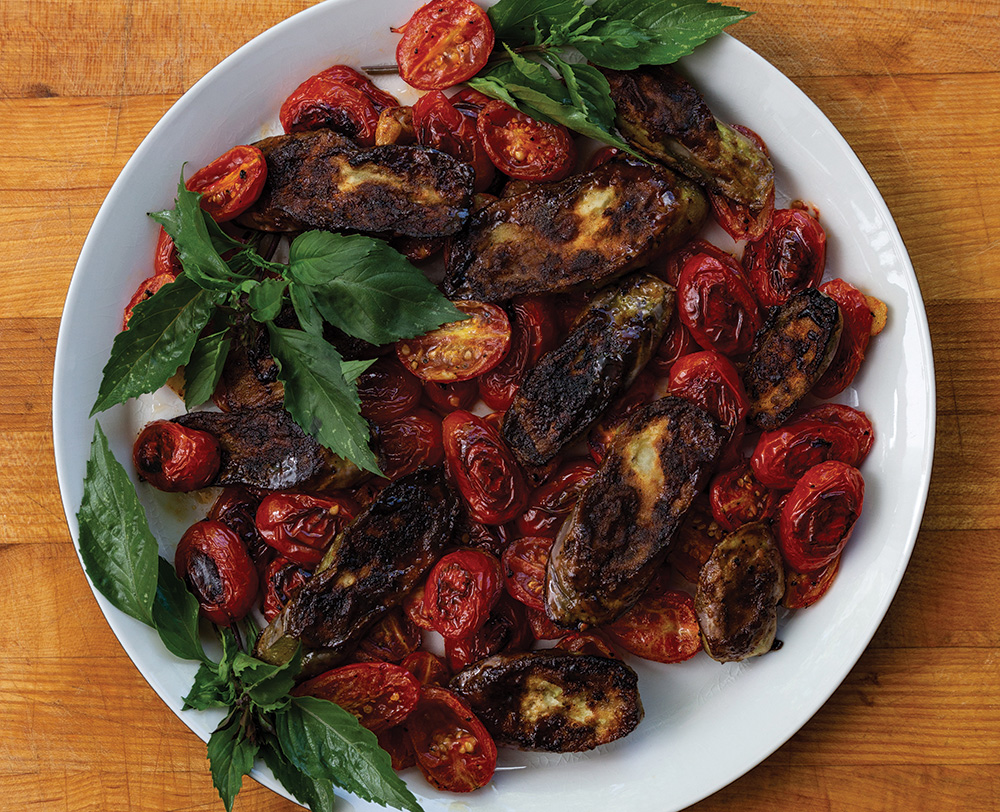 This is a recipe about techniques and guidelines. As for proportions, I like to explain how it works and in what ratios, so that you can adapt this recipe and make it your own. Cooking is fun—and flexible.

Cut the stem end from some eggplant (quantity and variety of eggplant are up to you—I love the smaller purple Italian eggplants and Japanese varieties, but a good old standard like Black Beauty is also delicious. Using a vegetable peeler, peel one-inch wide strips of skin from the eggplant all the way to the bottom, which can be tough. It should look striped. (Eggplant skin is an essential part of the flavor and experience of eggplant, but too much, especially in older eggplant, is not necessarily a good thing). Cut the eggplant into ½-inch thick slices, rounds for larger eggplant, or on the bias for smaller, skinnier eggplants. Lightly salt them and place them in a bowl. Pour over just enough milk to cover the slices, place a piece of plastic wrap or a small plate directly on the surface to keep the eggplant in contact with the milk (in case it floats). Refrigerate for 24 hours (ideally).

On the day you intend to serve the dish, slice cherry or grape tomatoes in half, or larger plum-style tomatoes in quarters. Sprinkle lightly with salt. Peel and thinly slice a few cloves of garlic and toss in with the tomatoes. Drizzle everything with a tablespoon or two of extra-virgin olive oil, and sprinkle with some herbs (fresh thyme and dried oregano are a favorite combination of mine). Toss everything together and allow it to sit for about 30 minutes. The tomatoes will release a good bit of water—that’s a good thing. Preheat your oven to 450°. Scoop up the tomatoes from the bowl with your hands, shaking any excess liquid from them, and spread, cut side facing up, on a lightly oiled sheet pan or one lined with parchment. Place the pan in a preheated oven (use a convection oven/fan if you have that option—it dries them out faster), and roast, stirring occasionally, until slightly shriveled and charred a bit around the edges. Allow to cool.

Pick your herb of choice (basil, Thai basil, cilantro, fresh or dried oregano—whatever would harmonize with your meal) and pick, tear or shred it into small pieces. Reserve.

Remove the eggplant from the milk and pat it dry. Give the milk to the cat. Preheat a non-stick or cast-iron skillet on medium high. Dredge the eggplant in a bit of all-purpose flour. Pour a tablespoon or two of olive oil into the skillet and add the eggplant slices, cooking them until lightly browned on the first side, then turn them to cook on the second side. When they begin to color on the second side, add a splash or two of good soy sauce, a few chopped anchovies, or vinegar and gently shake and agitate the skillet, turning the pieces so they are completely coated and glazed. Add the roasted tomatoes and reserved herbs to the eggplant slices, toss a few times, and pour into a serving platter. Garnish with more of the herbs. Serve warm or at room temperature.

San-J Organic Shoyu Soy Sauce
Made from organic soybeans and wheat, Shoyu (Japanese for soy sauce) packs a flavor wallop. A little goes a long way. Not for the salt or soy sensitive. Available at better grocery stores.

Bluegrass Soy Sauce
Handcrafted in Louisville, Kentucky at the only small-batch soy brewery in the U.S. Lower in sodium and brewed and aged in bourbon barrels for that little extra smoky-sweet nuance. Available at Amazon and other fine foods retailers.

Bragg’s Coconut Liquid Aminos All Purpose Seasoning
Made from organic non-GMO, MSG-free coconut blossom nectar, apple cider vinegar and sea salt. Delicious on just about anything, extremely low in sodium and insanely tasty. Available in the Health Market section of Hy-Vee and other health food stores.

Columela Vinagre de Jerez  Sherry Vinegar
Nutty and mellow but full-flavored sherry vinegar is a great substitute for good wine vinegar in any recipe. It has a special affinity for roasted sweet peppers. Produced in Spain and available at Whole Foods and other fine grocery stores.