Okay, this may be a tough one for some people. Even my food-savvy editor—not a Southerner—questioned my choice of ingredient. But okra is delicious! As a boy from Arkansas, I have wonderful memories of tasty fried okra, lightly coated in cornmeal and cooked until crunchy. People in warm-to-tropical climates around the world—think the Caribbean, parts of Africa and India—love this plant. Unfortunately, those unaccustomed to the subtler qualities of this versatile vegetable think of it as “slimy,” the quality that makes okra valuable as a thickener (as in gumbo), a characteristic resulting from its richly mucilaginous nature. These people are simply the victims of culinary abuse from the hands of an inexperienced cook.

Okra is a plant that thrives in the heat when other vegetables simply give up. Its origin (African, Middle Eastern?) is still up for debate. Its value as a crop cannot be ignored. Like flax seed (another mucilaginous plant), okra is exceedingly good for you. It is loaded with fiber and other components that aid digestion. Okra comes in a number of varieties, like the simpler ones I grew up with, to the beautiful and more exotic varieties I now grow—the brilliant Red Burgundy and the geometrically intriguing Star of David. The flower of an okra plant is stunning, like its close relative the hibiscus, an elongated velvety bud that spirals open to reveal a dramatically contrasting interior. The foliage can be quite large, similar to that of an overly ambitious cannabis plant, and can compete in any landscape. But its true value is in the edible seedpod.

Only a few years ago I had a revelation in an Indian restaurant—pakoras. Pakoras are essentially garbanzo bean flour-coated vegetables that are fried. Both the French and Italians fry garbanzo bean (chickpea) paste, so it wasn’t that far outside of my culinary experience. A little internet search lead me down the chickpea-encrusted rabbit hole and I never looked back. Okra is also delicious when rapidly sautéed naked at high temperatures with a few spicy peppers, cherry tomatoes, and garlic. My weakness is still okra, fried. If you’re a skeptic, I’m convinced this recipe will make you a convert. Hope you enjoy! 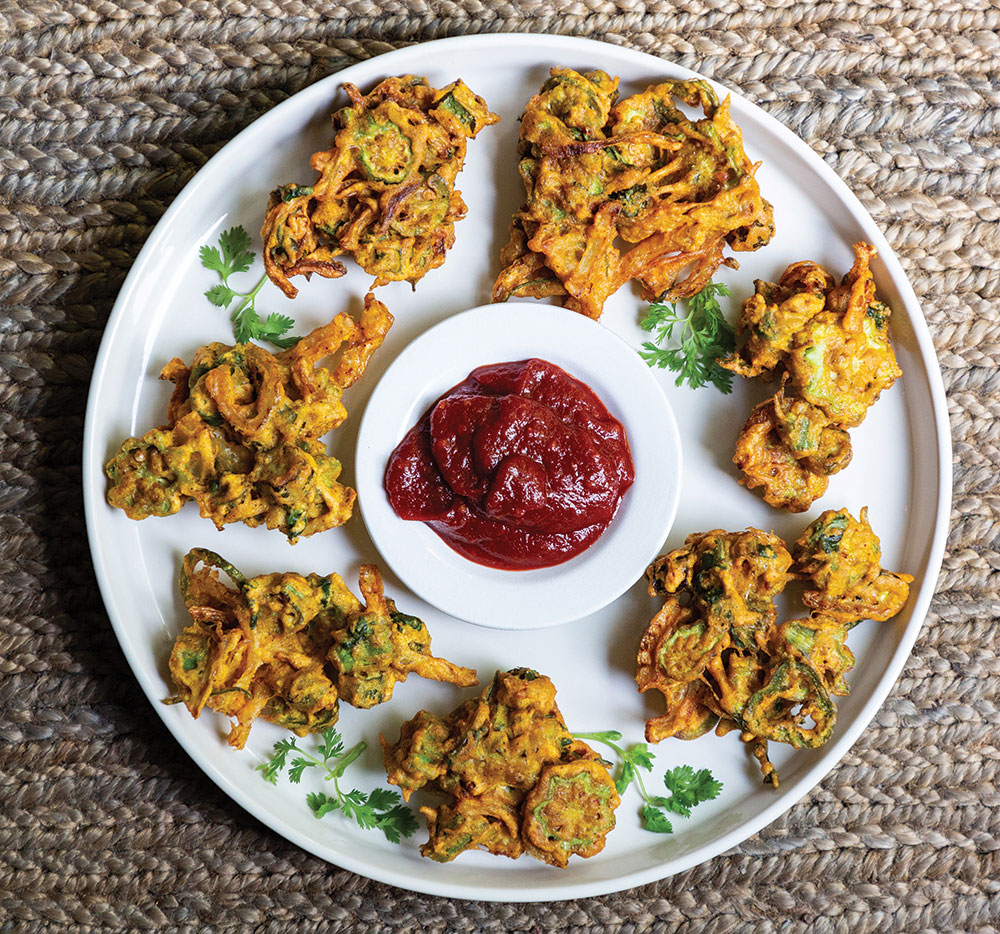 Combine the vegetables in a bowl and sprinkle lightly with salt. In a separate bowl, combine the dry ingredients. Mix them thoroughly, smashing with a spoon to eliminate any lumps. Sprinkle approximately ¼ cup water over the dry mixture and combine, smashing the mixture together to again eliminate any lumps. Drizzle with the remaining water and combine again to form a pancake batter-like mixture. Add the vegetables and any liquid that has accumulated in the bottom of the bowl. Stir/squash the mixture, preferably with your fingers, until everything is combined and a little on the pasty side. Set aside for a few minutes. Heat a deep fryer or deep skillet with vegetable oil to 350 degrees. Carefully drop clusters of vegetables into the oil a few at a time. Fry until golden on one side then flip and continue to fry on the second side until they reach a deep golden brown. As they finish, remove the fritters to a second plate, continuing to fry in batches until all of the mixture is cooked. Serve immediately, while warm, with a spicy ketchup or hot sauce, preferably one with a little sweetness.

Notes on the recipe: Of all the recipes I know for fried vegetables, this is possibly the most versatile. For a gluten-free version, substitute more garbanzo flour for the semolina; for a more Middle-Eastern flavor, add more curry/spices; no corn starch—no problem—try potato starch or more garbanzo flour. No okra—use a different vegetable! It is so flexible—just write down what you use (and which version you like the best) so you can remember exactly how to cook yours the next time.

How to Handle a Party Disaster