How does one write a column on party hosting when one cannot in good conscience advise you to have or attend a party? We have online meeting options of course, but I am not tech-savvy enough to tell you a single thing you don’t already know about them, other than we mustn’t get too dependent on using them.

Because, reader, the pandemic is going to end. Every day we hear great news about therapies and vaccines being fast-tracked. But in the meantime, we must keep ourselves safe, as monotonous as that may be. To all you frustrated hosts and hostesses, I know you are dreaming of the parties you long to have, of the merry groups you want to gather for drinks or cozy dinners or Sunday brunches under your roof.

I’ve danced around the “entertaining” topic the past several issues by talking about my most beloved cookbooks, my most indispensable kitchen tools, my favorite comfort foods to make for your quaran-team. This month, I’m sharing with you my own particular idols of entertaining. I hope I don’t discourage you from reading any further when I tell you they are all long dead. Still, there are things we can learn from them.

The Fearless Mrs. Vreeland
Diana Vreeland, former editor of Vogue, known for her sartorial and editorial genius, was a venerated hostess, famous for her cozy dinners for eight in her two-bedroom flat on Park Avenue. Although D.V. ran in wealthy circles, she didn’t have money until late in her life (“It never occurred to me to ask for a raise” she said), but her guests had no idea she was strapped for funds. My hunch is she was so imperial, so fearless as a hostess, she made all of her economy-driven choices look chic and intentional, a lesson for us all.

Before and after dinner, Mrs. Vreeland held court in her legendary living room, which was covered in red Persian fabric and filled with artwork, books, and photographs. “She lives in an atmosphere of informal luxury confined in crowded quarters,” said Vogue fashion editor Bettina Ballard, a frequent guest. “There is an aura of intimacy and mystery in which all conversation sounds important.” Just once, will someone please say that about my house on Harrison Street?

Andre Leon Talley, former Vogue editor-at-large, attributes much of his success to Mrs. Vreeland, in his deliciously readable new memoir, The Chiffon Trenches. It was from Mrs. Vreeland he learned not to apologize for pursuing a “refined, dandy lifestyle,” exhibited through activities such as lacquering his Louis Vuitton cases with yacht varnish, bringing them to a high shine. “It’s not about glamour,” says A.L.T. “It’s self-respect—a standard.”

Mr. Capote’s Little Dance
Would you like to get back at everybody who has ever dissed you in your entire life? Throw an enormous masked ball with a glittering roster of guests, from which all transgressors are pointedly omitted. To really rub it in, release the guest list the next day for publication in the New York Times. That’s what Truman Capote did in 1966 when he planned what is still being called the party of the century.

Capote’s Black and White Ball continues to be the subject of books, magazine pieces, and blog posts. (And I think I have read them all.) Why do we still revere a party from which so many were excluded, given by a man who later betrayed almost everyone who ever trusted him? Answer that and you will unlock all the mysteries of human nature.

His Real Friends Called him Nick
The writer Dominick Dunne and his wife were among those not invited to Capote’s ball, even though Dunne later claimed that Capote ripped the theme off from him, after having danced the night away, two years earlier, at the black-and-white party Dunne and his wife Lenny hosted in Beverly Hills to celebrate their tenth wedding anniversary. He makes a compelling case for it in The Way We Lived Then, a scrapbook-style memoir filled with snapshots of glam parties the Dunnes hosted and attended during the 1950s and 60s. The star-studded photos, most shot by Dunne himself, are a fascinating moment in time: Mainbocher dresses, tuxedos, everyone smoking their heads off. In those days even the surgeon general was a two-pack-a-day man.

If you aspire to a sophisticated social life (and is that so wrong?), read everything you can get your hands on by Dominick Dunne, one of the great American writers, party-goers, and societal commentators. Would that he were still alive, still writing.

A Salon is a Salon is a Salon
Nobody ever talks about the food Gertrude Stein and Alice B. Toklas served at their fabled Saturday night salons, which just goes to show, once again, that a great party is not about the cuisine, it’s about the conversation. Guests originally came to see Stein’s radical art collection, but they stayed for the company, which included the most avant garde artists and writers of the day, as depicted in Woody Allen’s 2012 gem, Midnight in Paris. Picasso, Hemingway and Matisse—then unknowns—were frequent attenders at 27 rue de Fleurus on the Left Bank of Paris.

A friend of Stein’s commented that she collected geniuses, not masterpieces, and that she could spot them a mile away. This is something I have noticed about great hosts and hostesses: they have an eye for people on their way up, and they include them at their parties.

Who Doesn’t Aspire to be like Jac-Leen?
Isn’t it astonishing that Jacquelyn (she preferred it pronounced in the French manner, to rhyme with queen) Kennedy was only 31 when she became first lady? Her contributions to American fashion and culture are renowned, but she also knew exactly how to throw a dinner party.

Dim those lights, she instructed the White House staff, and bring in small round dining tables, so people could actually talk to each other. She told them to swap out the fussy flower arrangements for vases of simple blooms, and to light Rigaud Cyprus candles so the state rooms smelled divine. Very importantly, she insisted on inviting the most interesting people in the country, instead of those the Kennedy administration owed politically—she would not cave on this point. And she hired Frenchman Rene Verdon as White House chef, whose French food paradoxically became a perfect representation of American excellence.

How did she know to do all that? “The French know this, anybody knows this.” she said in a 1981 interview,” If you put busy men in an attractive atmosphere, where the surroundings are comfortable, the food is good, you relax, you unwind, there’s some stimulating conversation. You know, sometimes quite a lot can happen.” I would have said busy men and women. But other than that, my position exactly.

Regular readers of this column know I am a grudging, mean-spirited, resentful fan of Gwyneth Paltrow’s cookbooks. Say what you will about GP (and I’ll chime in, don’t get me started) her recipes are solid. This blue cheese dip/dressing from her book My Father’s Daughter is a boon for homebound families. You can make a batch of it, and it will last in the fridge for a week. It tastes delicious on pretty much any chopped or tossed salad, as a dip for veggies or chips, or a spread for burgers or selected sandwiches. 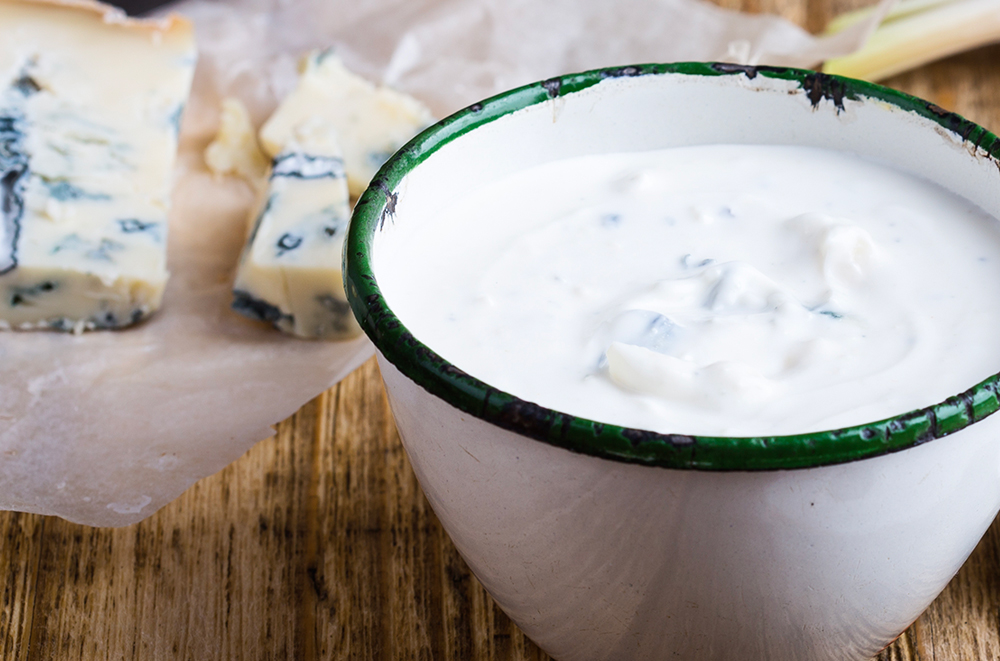 Stir everything together in a small bowl.