The story you are about to read is true. The names have been changed to protect the innocent, the opportunistic, and the too-nice-for-their-own-good.

My friend Mary was charmed when she received an email invitation from her friend Samantha to celebrate the significant birthday of Ezra, Samantha’s husband, at a tony restaurant here in the metro. The invitation was issued to four couples, all friends who hang together. “I can’t remember exactly how the email was worded, but I sort of inferred that it was Samantha’s treat, her birthday gift to Ezra,” Mary said.

The day arrived and the group assembled in a private dining room at the restaurant. Samantha began by ordering several pricey bottles of wine and an assortment of appetizers. “And the tuna tartare, definitely the tuna tartare,” she said. “But I want my own order,” she announced to the server. “I don’t want to share it.”

“My husband and I were being careful about what we ordered, respectful of the fact that Samantha was probably going to pick up the tab,” Mary told me.

More wine was ordered, more appies, then the entrées. And more wine.

Then, one of the men at the table addressed the group: “You guys, we can’t let Ezra and Samantha pay—it’s Ezra’s birthday!”

“What could we do without looking like total jerks?” Mary said.

Samantha and Ezra looked demurely down, while their friends got out their wallets and paid.

“We were hyperventilating on the way home,” Mary said. “To us, that’s a lot of money. Samantha is a good friend, and I’m sure I’ll get over it at some point, but I have been rather frosty to her since that evening.”

In Vino, Veritas—and Vexation
I have recounted Mary’s story to a number of friends and everyone, it seems, has a similar tale. The trouble often starts with wine, which can take a reasonable bill and send it through the roof.

In fact, I shared Mary’s story with my friend Jessica, in a conversation we had in the wine aisle at Costco—where everybody runs into everybody—and she told me she had the same experience at the same c, except the tab-per-couple was closer to $500, most of which was for costly bottles of the grape, ordered by others in the party. Everyone split the bill equally, but Jessica’s husband does not drink wine. “It gives him a screeching headache, so he never touches it,” Jessica told me, explaining that he did have a little bit poured into a glass so he could participate in the birthday toast, but he didn’t drink it. “By the time the check arrived, everybody else had a bottle of wine in them and didn’t notice who was drinking and who wasn’t. And it had been such a fun evening up to that point. What could we have said without sounding like buzz-killing cheapskates? We just sucked it up and decided next time we’ll ask for separate checks.”

And Speaking of Separate Checks
Separate checks are the way to avoid so very many awkward moments in restaurants. But there seems to be a reluctance, especially among us baby boomers, about requesting separate checks—probably left over from the days when bills were tabulated manually. Restaurant computer systems have evolved to the point where complicated checks are pretty easy to split, especially if you are clear with the server before you order that that’s what you want.

When my husband and I go out with friends, we try to let the server know right away that everyone is on separate tickets. It’s amazing how quickly everyone relaxes, once it’s been established that no one is getting stuck with Merrily’s bar tab. Kidding.

Always be Clear
If you are planning a celebratory party at a restaurant, when you issue the invitation make it crystal clear whether it is your treat, whether you expect guests to chip in, or whether, like the supremely weasel-y Samantha, you plan to order your favorite high-end pinot and your own private plateful of tuna tartare, yet wish for your friends to pay.

When you really mean business about treating someone, it’s gracious to arrange beforehand for a credit card imprint, and for the addition of a 20 percent tip, thereby avoiding any presentation of a check at the table.

When You’re Being Treated
When someone else is paying the bill—even if you know it qualifies as a business expense—take a cue from the host as to what to order. Ask what they like or recommend. If they say the lobster is great here, or the pasta is done well, they are providing verbal cues that you order in that price range.

Back to the wine thing. Most of the non-drinkers I know are too polite to insist on separate checks. Not my hilarious friend Jerome, a non-drinker who dines out frequently with friends who drink. “I always pull the server aside, tell him I want a separate check and then I never drink anything—not even a Coke—just so there’s no mistake about it,” he says.

Talk About Cheap
To close with, I have another good one for you. My brother in Cleveland knows a couple who were invited out to a restaurant by friends. The friends specified that restaurant because they had a $100 coupon for it. Since that was disclosed, the couple made the assumption that the coupon would be used on the total bill. At the moment of truth, the couple with the coupon (who asked for separate checks) used the coupon for their bill only! If you have a coupon or gift certificate, share the wealth with your dining companions or save it for another time. 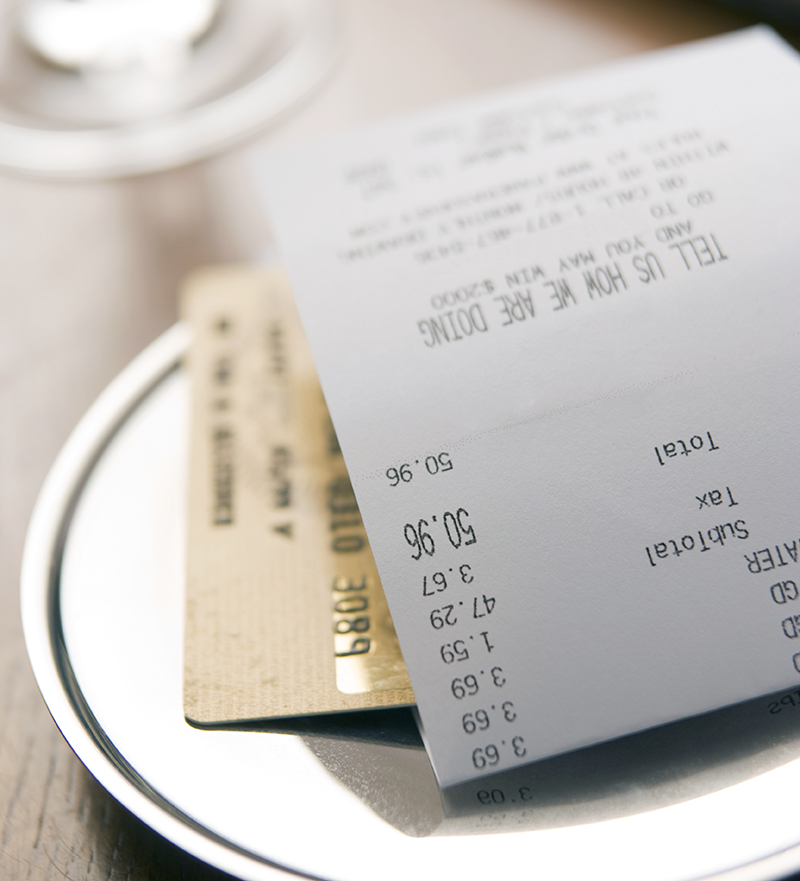 How much should you tip in KC for good food service?

If you have a drink at the bar: At least 15 percent, before sales tax.

If you lunch or dine at a sit-down restaurant: At least 20 percent, before sales tax.

If you use a wine steward or sommelier: Fifteen percent of the cost of the wine, in addition to the server’s tip. (Try to tip him/her in cash, separately.)

If you eat at a buffet-style restaurant: Ten percent before sales tax.

If you check your coat: Two dollars.

If there is a restroom attendant: One or two dollars

If you pick up a to-go order: Twenty percent, before sales tax. (Packing a to-go order takes time and skill. They deserve it.)

If you have food delivered: Ten to 15 percent of the bill, but never less than $5. Tip extra in bad weather or if you live far away from the restaurant.