Professional Cookier Cindi Raven is always up for a challenge. When her two daughters were little, they’d ask for elaborately themed birthday cakes. Raven would always give it a shot, despite having zero decorating skills at the time. “Every year they’d come up with some idea of something they wanted—to test me to see if I could make it,” laughs Raven. “So, I’d try it.”

Through some trial and error (read that: more error than trial), the self-taught icing goddess found out she had a flair for delectable designs. As her attempts at artistry got zanier, the better she got. (Oh—and keep in mind this was long before YouTube. Raven’s only source of true inspiration at the time was some broad named Martha Stewart.) “I started doing cakes for friends,” says Raven. “I did a wedding cake. The stress of getting it to the church and getting it put together was awful—and I thought I’m not doing this anymore.” Raven’s baking bonanza almost ended before it began. But, fortunately, cooler heads prevailed. Cakes eventually gave way to cookie decorating.

What started out as a lark for this corporate wonk nearly 12 years ago, has blossomed in to SugarChat Cookie Studio. It’s become a full-fledged side hustle—complete with her own popular Instagram page. (You can thank her savvy social media-friendly daughter for that nugget.) “My daughter says, ‘Mom, you gotta get on Instagram. People need to see what you’re doing,’” says Raven. “And then I found the cookie world. There are so many talented, creative, inspirational cookiers out there. We all learn from each other.”

Once Raven discovered her tribe, she really started to go down the cookie decorating wormhole. Last year she took her talents to CookieCon in Salt Lake City. (Yes, it’s a thing, people.) “I won second place in the ‘Anything Goes’ category,” beams Raven. “I spent six hours on (decorating) that one cookie. It was time well spent—good notoriety and publicity.” 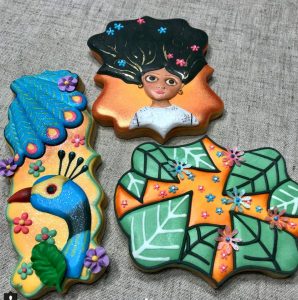 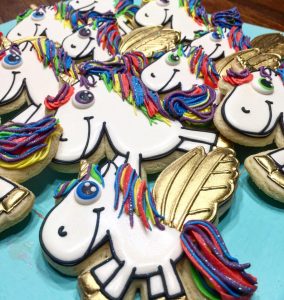 If you’re thinking about ordering a batch or two or ten, be prepared to open your wallet. Her designs aren’t cheap—with prices starting at $48 a dozen. Also, be prepared to bat your eyelashes. Raven is only taking a scant few custom orders anymore. Why, we asked? Is she suffering from bakery burnout? No, it seems she’s become so good at her craft, that she’s started teaching cookie decorating classes instead—you know, when she’s not working her full-time job as a VP of HR for a technology company. “I was given a gift and I was supposed to share it. I’ve had so many good compliments.” says Raven. “Everybody wants me to quit my day job,” she chuckles.

Classes have become such a huge hit that Raven is finding it harder and harder to hunker down and just decorate. Each cookie is a labor of love—emphasis on labor. Some can take 2+ hours from start to fabulous icing finish. Her real passion over the last year, however? Showing others how it’s done. “I just want people—say, people who want to make cookies for their kids or families—to be able to do it,” says Raven.

And do they taste as good as they look? Better, says Raven. “A good cookie is a tender cookie—not crazy sweet or cloying sweet,” says Raven “I like soft cookies—and I don’t make anything I don’t like.”

Sitting down? Raven says she’s been so insanely busy over the last 18 months she’s actually lost over 40 pounds—and that’s despite having an ever-present sweet tooth. Think of it as quality assurance. “Oh my God, yes! I eat at least one of my cookies a day,” says Raven. “I’m not kidding—I like ‘em. I get busy and haven’t eaten anything since lunch and it’s 1am and I’m, like, okay—I’ll eat a cookie.” 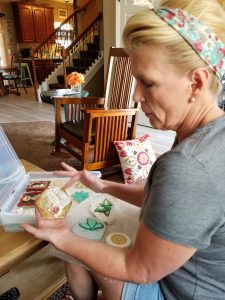 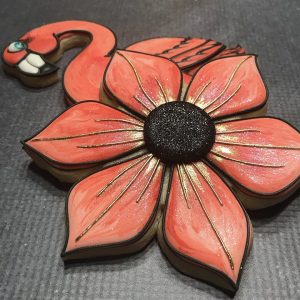 Like we mentioned, if someone really, really wants one of SugarChat’s cookies, it’s best to (real) butter Raven up ahead of time. But if you want to join in on one of her upcoming private classes, she’d be more than happy to have folks join in on the fun. She’s a trainer by heart—which is why she’s carved a niche in the HR field. But with cookies, she’s truly found her calling, she says. “I really love the teaching and the sharing. I want to be able to explore and create and that’s why I’m not taking orders,” says Raven. “When I’m overwhelmed, I can’t create. I have to be able to have time to sketch and come up with ideas. I have a whole trayful of half-ideas that I want to experiment with.” 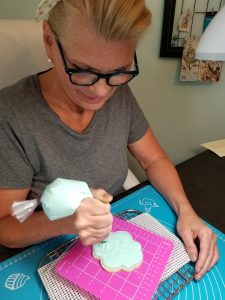 And with so many cookies under her belt, does she have an all-time favorite design? “Picking my favorite cookie is like picking my favorite child,” says Raven. “I keep my favorites. It’s hard to let them go.” And, indeed, she means it. She has several bubble-wrapped tubs containing some of her best cookie creations. “It’s a creative outlet for me—the outlet. This is my medium. Royal icing is my art—my paintbrush. There are so many things that you can do.”

Five Things You Don’t Know About Me: Dr. Amber Botros