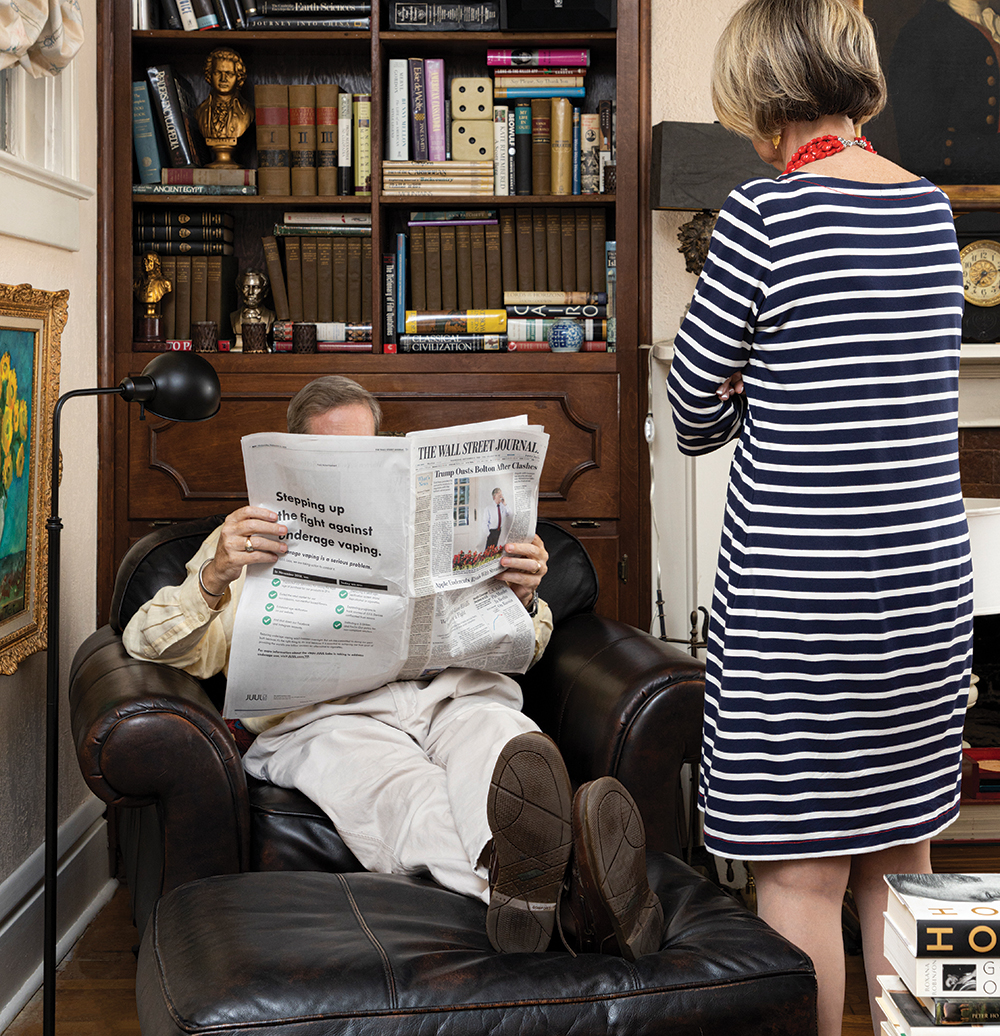 It is a truth universally acknowledged that a couple preparing to have people over must be in want of a spat. Almost every couple I know—straight, gay, not married, married forever, newlyweds, you name it—locks horns before they host a party

I have a friend whose husband “helps” by doing Sudoko until ten minutes before people are expected to show, then jumps in the shower. When guests arrive, he comes downstairs in a shirt he’s thrown on without drying off, so he looks like he’s sweating through his clothing. Another friend’s partner likes to “help” by going to his study and arranging his engineering magazines in chronological order. There must be some logic to their thinking. But why inquire, when it might start another pre-party argument?

And start one it might. With couples, party-giving brings out conflict. I am reminded how common this is whenever I give a talk about entertaining. “Accept that you will have a fight with your spouse on the day of your party,” I’ll say, and the heads nod up and down in knowing agreement.

I spoke several years ago to a ladies’ group, and afterwards a woman came up to me. “My husband has forbidden me from entertaining in our home, because I turn into such a nutcase,” she said. I could relate, and so, certainly, could my husband.

We are all a little cray-cray
I will confess that on the day of a party, I wake up in Defcon 4 and devolve to Defcon 1 for about an hour before the doorbell rings. I am focused on getting as much done as possible, so I can be all smiles and graciousness once the guests arrive. Defcon 1 is a face I show only my husband, that of a scolding, humorless harridan. There always is this last minute crush of things to do—or at least I think they should be done—and I turn into a world-class bee-otch. I feel like I have to do everything. He would tell you that whatever he does is never good enough. We’ve both become accustomed to this pre-party drama.

Leave a list
For my husband’s part, it took me many years to realize I cannot effectively tell him what to do. But he cheerfully will do anything I ask if I write it on a list and leave it on the kitchen table. I have also learned—although I often forget—that it helps to praise him lavishly for everything he does. But these understandings have been hard-won, and we still square off a time or two before a party.

Hire staff if you can
If I have hired a bartender for the party, his or her arrival, usually an hour before start time, assists in relieving the tension. A good bartender helps enormously with last-minute prep. And it’s just helpful to have another person there who is not my spouse, at that point barely speaking to me. But unvaryingly, hired staff or no, we shake it off, relax and have a really fun time, once the guests arrive. It is always so worth it to have the party. And afterwards, the shared sense of elation brings us closer.

A shrink weighs in
My fabulous friend David Donovan, a Ph.D. psychologist and couples therapist, says the topic of pre-party conflict comes up with some frequency in his practice. “Many couples become frustrated with each other when they host a party,” he says.

According to David, this frustration has been happening since the dawn of man. “Freud has gone so far as to say that civilization itself is a product of the clash between the incompatible demands of biological urges and social conformity,” he says. “Which is a great way to illustrate how entertaining at home might be one of the best examples of man’s conflict with civilized living.

“We are always battling our flight/fight urges and other instinctual responses when confronted with stress-inducing social rituals. Our desire to commune with and host others is sometimes at odds with our baser instincts like needing more rest, fear of looking bad, or wanting to watch reality TV and eat cheese puffs,” he says. Did I mention David is also very funny?

Fun: it’s a choice
David says this conflict is especially heightened when we share hosting responsibilities with a spouse. “Since there’s a lot of truth to the idea that most couples are together more because of complementary attributes—opposites attract—and not for being alike, conflict is sure to arise as each partner strives to make him or herself satisfied when entertaining.

“Like, one person might be more introverted, detail-oriented and perfectionistic, while the other is more extroverted, social and fun-loving,” he says. Don’t we all know twosomes like that? David points out that this actually makes for a good hosting combination—if one can get past the frustrations with the other.

David advises that couples talk about the event beforehand. “Decide who’s going to do what and what the evening is going to look like,” he says. “Verbalize the different good qualities each brings to the table and make a pact to have fun.”

A word from the etiquette committee
If you and your honey have a pre-party dust-up or two, it’s important to forget your quibbles once the party starts. Or at least conceal your irritation until you are alone together. Never bicker in front of people—it makes everyone feel uncomfortable and embarrassed for you. This applies to attending a party as well as having one. Watch it with the one-liner “just kidding” zingers. You may think you are being funny, but often such digs produce awkward, frozen smiles or worse, the room will go silent and someone feels the need to change the subject. Perhaps to a discussion of Sudoko or engineering magazines. 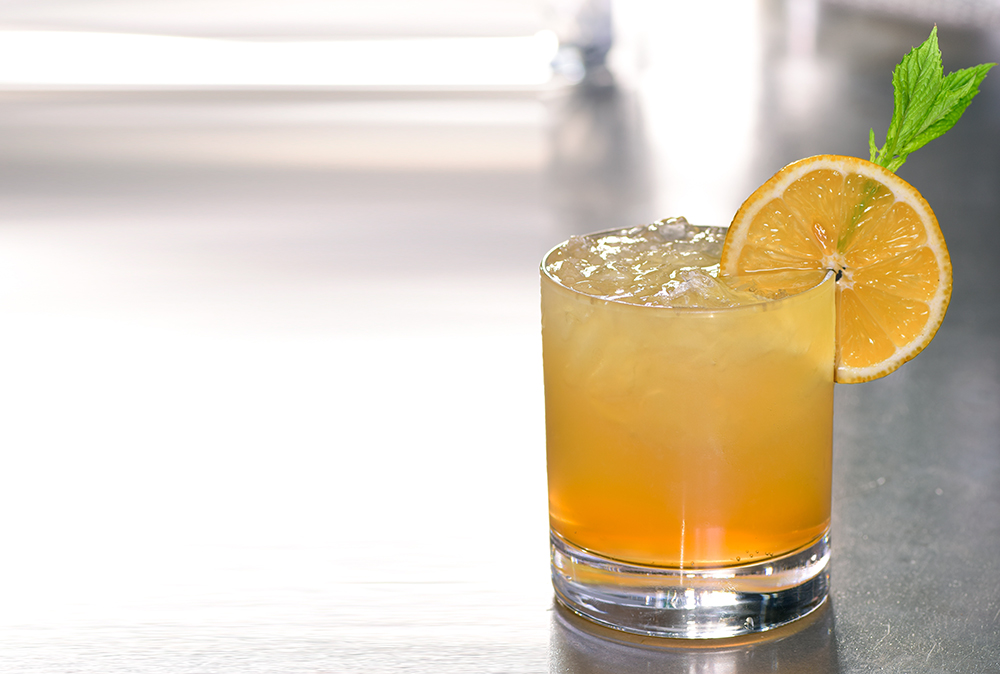 This is a fabulous, easy-to-make cocktail for a fall party. One batch makes ten ¾-cup servings, but the recipe is easily multiplied for a larger crowd. I use my electric juicer to make this.

Combine sugar and water in a 1 cup glass measure. Microwave on high for two minutes, stir until sugar dissolves. Cool to room temperature.

Combine sugar mixture, orange juice, and lemon juice in a large pitcher; stir well. Stir in club soda just before serving. Serve over ice cubes in a double old-fashioned glass, or whatever pretty glass you have on hand. Garnish with orange slices or wheels, if you like.