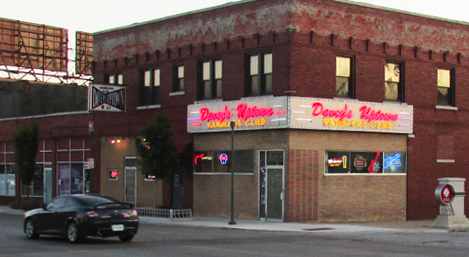 Davey’s Uptown Ramblers Club was known as an essential music venue and unpretentious dive bar. And it was proud of both reputations.

But to musicians in Kansas City, Davey’s was something else: a music hub; a sanctuary; an incubator; a stepping-stone and rite-of-passage.

Saturday morning, fire swept through the building near 34th and Main streets, destroying it and sending tidal waves of shock, grief, and nostalgia through a community already staggered by the severance of nearly all live-music performances because of the Covid-19 pandemic.

All day Saturday and into Sunday, the aggrieved spilled their pains and sorrows—in words and photographs—onto social media platforms. Many changed their Facebook cover photo to a graphic that declared: “I Am An Uptown Rambler.”

“Raise a glass and pour one out for the Uptown Rambler,” wrote Amy Farrand (American Catastrophe, Sister Mary Rotten Crotch, Amy Farrand and The Like). “So many years of shows; 31 years for just my bands.”

From Artie Scholes, musician and former longtime Davey’s employee who now owns his own neighborhood bar, The 403 Club, in Kansas City, Kan.:

“This is a tough one. I grew up in this building. Literally. Swept the floors for Davey with Michael Markowitz. Worked with Michele Markowitz for over half my life. Made friends and enemies. Played rock shows.”

From Steve Tulipana, co-owner of music venue RecordBar and member of several bands: “Davey’s was the first bar/club that allowed one of my bands to perform when we were underage. Michele and the rest of the staff have always been so supportive. I’m heartbroken for them all.”

“My heart aches for this place,” wrote jazz musician Jeff Harshbarger. “I have loved every minute I have spent there.”

Davey’s has been on Main Street since 1950, first under the ownership of founder Davey Markowitz, then his daughter Michele Markowitz, the current owner. In the 1990s, it expanded north (into the space that was Jimmy and Mary’s, a Italian steakhouse), adding a larger second stage, bar, and dance floor.

Before the expansion, the club could get pretty cozy when bands were performing on the original stage, and fans and musicians were forced to mingle abruptly mid-performance.

Kansas City musician John Evans called it “a stage that was little more than a couple of fortified pallets covered in carpet and bolted to the floor next to the women’s restroom door. … On crowded nights anyone playing on the flanks looked like they were standing in line for the restroom.”

Some remembered those days fondly.

From singer-songwriter Kristie Stremel, formerly of Frogpond and Exit 159: “I was an Uptown Rambler when you had to walk over my amp to use the restroom.”

Gregg Todt (Federation of Horsepower, the Almighty Trouble Brothers) wrote that among his many memories: “Having to set my drum kit sideways on the bar-side ‘stage’ to make it fit (and) laughing every time whoever was playing stage left had to move whenever a lady had to use the bathroom.”

Davey’s unkemptness and dive-bar decor added to its charm, but the venue was heroic among musicians because Markowitz was willing to give new bands a chance sight unseen, willing to let them jump in the deep end and sink or swim on their own—taking their word that they were ready for legitimate live performances.

John Fackler remembered walking into Davey’s in the late 1990s to secure what would be the debut show for his band Jettison. All he had to submit was the band’s name and they got a spot:

“No attitude, no demo-tape requests, just trust that if a band had the guts to walk in and ask, they were probably ready enough to play.”

Davey’s also helped take care of the musicians who played there, hosting countless benefits for musicians, including one for Fackler in 2016 to help him purchase a wheelchair-accessible van and power wheelchair.

In 2008, it hosted the inaugural Apocalypse Meow, a benefit for Abigail Henderson, who was undergoing treatment for cancer. That show also launched the Midwest Music Foundation, which helps defray medical expenses for musicians who have no insurance or are underinsured.

Henderson died in 2013, but the MMF’s Abby’s Fund is named in her honor. Davey’s was sacred to Henderson, too, for reasons beyond all the shows she played there. From her husband, Chris Meck, a longtime Kansas City musician and former Davey’s employee:

“I met Abigail Henderson there … Hell, I met most of you there. I worked there for more than a decade when we weren’t on the road. It was my living room.”

That sentiment was expressed by many: Davey’s was a place where friendships and romances began (and ended), where couples got engaged, where weddings were celebrated, where band concepts were conceived, where bands played first and final shows, where friends found solace among one another in times of loss.

It had another side, too. It was a place where a brawl might break out mid-performance, where at least one musician set himself on fire (the flaming-shot incident), a place with Trainspotting toilets, a place where the final band might not hit the stage until well after 1 a.m. (like a damn Tenderloin show I attended).

And it was a place where unwitting musicians got infamously “Mokie’d,” which Scholes described as “an affectionate term for waking up the day after hanging at Davey’s while Mokie was tending bar. He had an incredible knack for making you love him while you were at the bar and completely hating him the following day.”

Davey’s gave time and space to some of Kansas City’s more experimental and adventurous music projects: Mr. Marco’s V7, which played its first show at Davey’s; the Wyco Low Riders, a band of nearly all bassists that is pretty much open to anyone who can play bass; and the lavish and incomparable GAV7D, from the mind of music genius Johnny Hamil.

In 2010, when Farrand’s Weirdo Wednesday Supper Club, a no-holds-barred, free-form variety show/revue, was ousted by another venue, Markowitz took it in and gave it a home for more than four years. The love and support was reliable and unconditional. 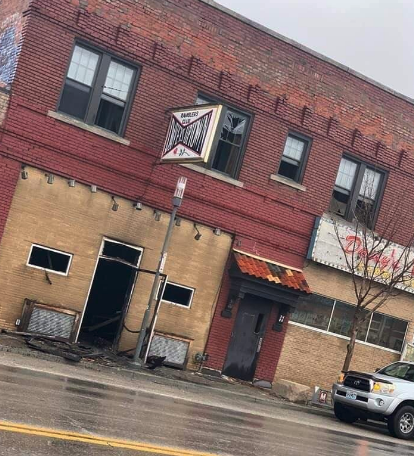 So when fire and smoke gutted the building Saturday morning, it revived decades of all those memories and moments among dozens of musicians and fans, most of whom are wondering what the next step is and how to help Markowitz get there.

Saturday, on its Facebook page, Davey’s posted an update: No one was hurt in the fire, which was caused by an electric problem with a beer cooler. Damage is extensive. And this:

“While it will take some time to sort out through the landlord’s insurance company (as well as the bar’s), the landlord has told Michele that she wants us back and, rest assured, we will do everything we can to keep strong drinks, live music, and fond memories at 34th and Main.

“There is no time frame right now as to when this will be resolved, but we will keep you updated as best as possible.”

Our music community has navigated similar losses, like the closings of the Grand Emporium and Crosstown Station and the end of record stores like Recycled Sounds and the Music Exchange.

If there’s reason to be optimistic about a new Davey’s it is via RecordBar, which was forced unexpectedly to leave its original site on the outskirts of Westport but resurrected itself in a venue just south of Sprint Center.

Yeah, the building is different but the spirit thrives, thanks to all that makes a business something more than just a conduit for transactions: the employees, the fellow patrons, the musicians, the relationships, the accumulation of memories.

Whether or not Davey’s returns at 34th and Main or at another building in another part of town, those who love the place have been reminded profoundly why it was special and why places like it should not be taken for granted.

Davey’s was its own unique culture, a planet in its own wayward orbit, floating in its own galaxy, a place that welcomed individuality. May everyone find comfort in knowing that all the memories and sentiments it created and rendered for decades are indestructible, eternal.