Wicked’s Allison Bailey may be a Southern belle from Florida, but Kansas City holds a special place in her heart. In 2015, Bailey sat with Kansas Citians at the Kansas City Music Hall as an audience member and watched Wicked for the first time the day before she was set to start rehearsal as an understudy for the role of Glinda.

After nearly seven years, she’s back, and this time she’ll be on stage as Glinda. IN Kansas City chatted with Bailey about what it’s like to be performing again and back in Kansas City after a 16-month, pandemic-caused hiatus from the show. 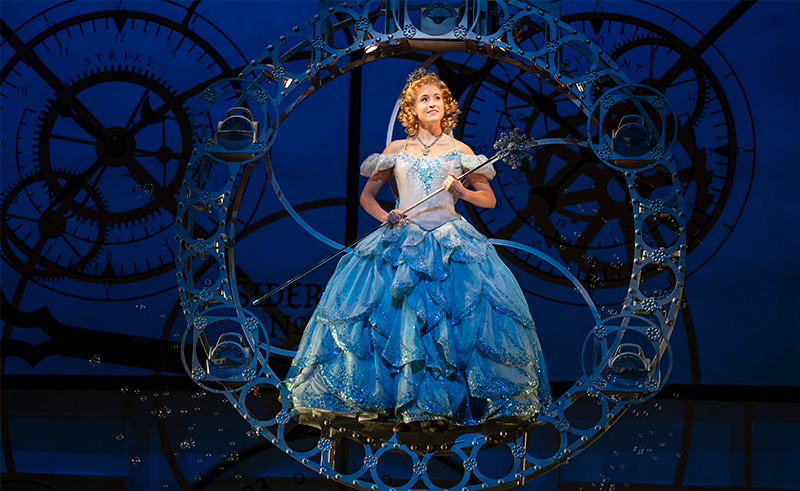 IN KC: You’ve been with the Wicked tour for quite some time now. Is there a difference between what it felt like to be on stage before the pandemic hit and being back on stage after?

Bailey: I still get the butterflies. Pre-pandemic and post-pandemic it is still so magical to be on stage. But I think there’s so much more gratitude after the pandemic just to be in a theater full of an audience of 3,000 people. I missed that so much. We were shut down for 16 months and there was so much uncertainty. It was so nice when we finally got back on stage—there’s nothing like it.

IN KC: What did you do in the interim over those 16 months when you weren’t performing for the first time in years?

Bailey: I went back home to my family in Pensacola, Florida. That was the longest I had been home since high school. It was a blessing in disguise to be able to spend time with my grandfather and my family, but it was also very difficult because I missed my job. That’s such a part of who I am, so it was definitely a hard time also.

IN KC: Wicked is such a beloved show. The last time it came through KC was in 2015. I can almost guarantee there will be audience members that saw that run in the audience. What differences do you think those audience members will notice?

Bailey: I think it’s going to be the same show, same heart, and same caliber they would have seen in 2015. But I think everyone is so happy to be back. We’ve been only back on stage for four months. I think it’s just so fresh—it’s clean, new, and I just think they’re going to see that.

IN KC: Is there any part of the show you feel like you identify with more or look forward to more than you did pre-pandemic?

Bailey: Yes, there’s a line at the very end of the show where Glinda says, “We’ve been through a frightening time.” And that just resonates so differently. I think everyone collectively onstage and also the audience—we’ve been through so much, and we’ve done it together. And that always hits different.

IN KC: When you’re on tour, do you have an opportunity to explore the cities that you stop in, and what do you look forward to in Kansas City?

Absolutely. I definitely love checking out local coffee shops and seeing what is different about that city. It’s one of my favorite things to do.

IN KC: Kansas City has a special place in your heart. Tell me about that 2015 run. Was there anything about the city that was super memorable?

Bailey: I was an audience member my very first night when I started because they get you a ticket for the show, and you watch it before you start rehearsal the next day. I have such an amazing memory of being there and seeing the show for the first time knowing I was going to be able to do this. Those are some great memories. I also remember there was awesome barbecue. I’m so excited to be able to come back, and it’s very full circle for me.

KCRep for All Makes Theater More Accessible in Kansas City