If Kansas City’s iconic Western Auto sign were a movie character, it would be that of a long-time coma patient who one day awakens to a much different world.

Other than perhaps the flame at the top of Liberty Memorial, the Western Auto sign was about the only light show downtown when it went dark at the turn of the century, nearly 50 years after its installation. But when the venerable old man of creative lighting downtown was reignited last summer, 18 years later, he discovered he had company. A lot of company.

Downtown Kansas City might not yet match the luminescence of Las Vegas or Time’s Square, but the landscape has brightened considerably. The City of Fountains has become the City of Lights.

The Kansas City Marriott Downtown seemed to kick off a lighting boom 15 years ago when a huge, dynamic light display was installed on its south facade. In the ensuing years, it has relayed messages bestowing holiday greetings, rooted on hometown sports teams before big games, and welcomed travelers and events to the city.

Today, the Marriott is bracketed on both sides by fellow creative lighting displays—the sky stations atop Bartle Hall to the west and huge video displays in the windows of the H&R Block building to the east. A mile to the south, Union Station regularly bathes itself in rays of light commemorating special events, holiday or sentiments. The Power and Light Building is well known for its red, white, and blue display on the Fourth of July. The Sprint Center advertises upcoming events on a large video screen out on Grand Boulevard, just as the Power and Light District does across the street. The Kauffman Center for the Performing Arts and One Light and Two Light buildings are newer additions to the creative lighting fray. Even City Hall has gotten in on the act by shooting rays of light over its top floors.

It seems as though nearly every office building, loft apartment building, or other business structure uses creative lighting to highlight their businesses or show civic pride.

“We think it’s a great trend,” says Chris Hernandez, director of the City Communications Office. “It shows a lot of pride in Kansas City, shows what the city and its energy are all about. I think that’s why we’re seeing a lot of businesses get behind the idea and getting involved.”

The “light wars,” as Union Station president and CEO George Guastello jokingly refers to them, seemed to really pick up about four years ago when the Royals made their push to the 2014 World Series. It only intensified the next year when the Royals returned to the Series and won.

“All the businesses and places around town wanted to show their pride by lighting up in blue,” Hernandez says.

Also fueling the frenzy was the booming popularity of social media. Twitter and Facebook accounts rushed to post photos of the way businesses and other entities used creative lighting to tell a story. In addition to Royals blue and Chiefs red, there also was Sporting KC blue, pink for breast cancer awareness month, Kelly green for St. Patrick’s Day, a rainbow of colors commemorating gay pride events and dates.

But according to Hernandez, there was one overriding factor that brought about downtown Kansas City’s charge of the light brigade—the advent of LED technology.

When the Western Auto sign was first erected in 1952, the 73-foot tall structure incorporated about 1,000 feet of neon glass tubing and 2,500 bulbs, which proved to be expensive to light and constantly needed changing. And changing those bulbs was labor intensive, requiring technicians to manually climb to change out a bulb. LED—or, Light Emitting Diode—technology is more energy efficient, lasts longer, and is more durable and safer. The technology also allows a large range of functionality and colors, all from the comfort of a computer keypad.

“It’s about a quarter of the cost as before,” says Eric Bosch, city architect in charge of the lighting at both City Hall and Bartle Hall. 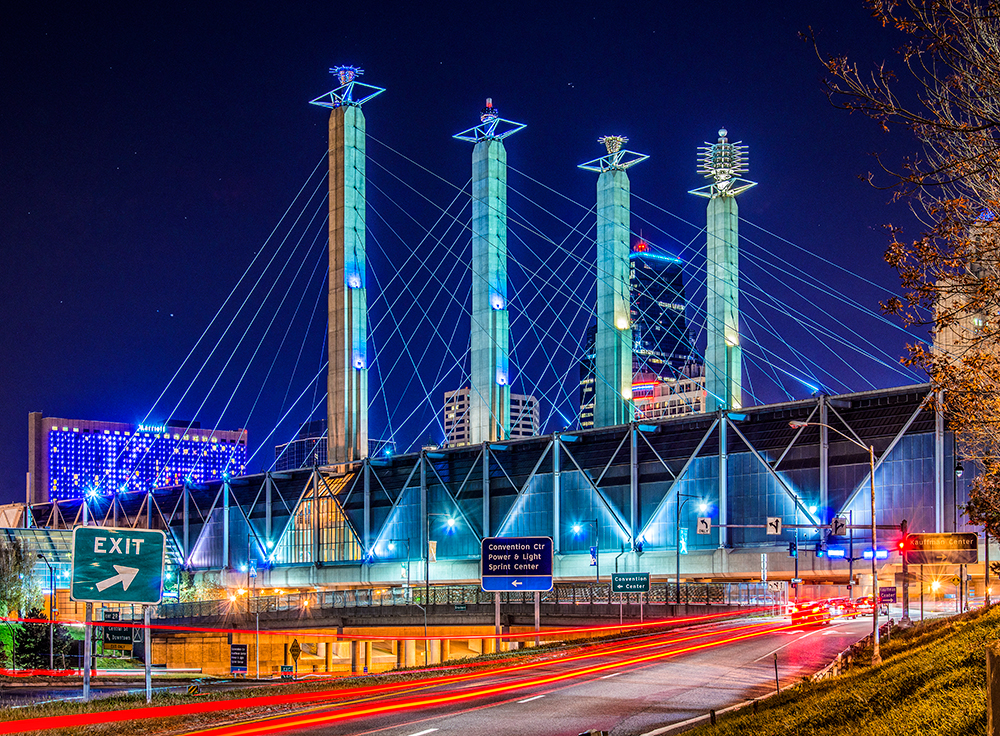 One For The Record Books

Paul James, director of operations for the Raphael Hotel Group, begins his description of the Marriott’s lighting system, which the hotel introduced in 2004, by saying what it’s not.

The Marriott’s display contains 800 softball-sized LED lights, spaced eight feet apart. That somewhat limits what the grid can do, James says, and makes viewing the display more appealing from a distance rather than up close.

“The World War I museum [at the Liberty Memorial] is one of the great vantage points,” he says.

It’s all controlled by what James refers to as the “monster brain,” a remote laptop that communicates with each controller at the top of each column of the grid and tells the controller what to do. And, because LED has the capability to direct light, the display is undetectable to anyone staying in one of the hotel’s south-facing rooms.

James adds that, though the Marriott does not use the light grid for advertising, it does field a variety of requests throughout the year to help bring local and social awareness behind a variety of causes and events supported by the city.

The Marriott even garnered a bit of world-wide fame with its creative lighting. James says that, for a short time, the hotel was in the Guinness Book of World Records for having hosted the largest-ever game of Pong on the side of its building.

“We’ve had a lot of fun with it over the years,” James says. “When we put it up initially, it revolved around the holidays. But with all the activities going on in Kansas City, it’s pretty much year-round. I don’t think we’ve gone dark in three or four years.”

James says he couldn’t be happier that the Marriott’s neighbors downtown have joined the creative lighting craze.

“I think it’s great that the whole city has gotten behind the idea,” he says. “It’s amazing to see what lighting a whole skyline can look like.”

Guastello calls historic Union Station the “front door to Kansas City” and points out that, when anyone puts together a promotional pictorial of the city, Union Station usually is front and center. As such, he sees the importance of using every tool available to make the building and the surrounding grounds stand out.

“We’re kind of the Barnum and Bailey’s of Kansas City,” he says. “We’re always looking for ways to make a big impact.

“It is the biggest billboard in Kansas City. It’s pride. It’s a way of telling a story.”

To tell those stories, Guastello says that four or five years ago, Union Station installed one of the highest-tech lighting systems available, one able to mix colors, change colors on the fly, and one that can be controlled remotely from a smartphone.

“It’s like what you’d see in a movie studio,” Cline says. “What used to take 3½ hours to set up now takes a few minutes.”

“We can take a building and turn it into a story and emotions that make people feel good and important. That’s good will you can’t buy.”

When Royals ace pitcher Yordano Ventura died in 2017 in a tragic car accident in his native Dominican Republic, Cline put together a special lighting package that bathed Union Station in a respectful and reflective blue and silver. That gesture received nearly one million views on social media. More recently, when legendary musician Elton John played the Sprint Center on his farewell tour, an image reading KC (heart emoji)’s Elton was projected on the front of the station.

“It’s all turned more theatrical,” Guastello says. “We can take a building and turn it into a story and emotions that make people feel good and important. That’s good will you can’t buy.” 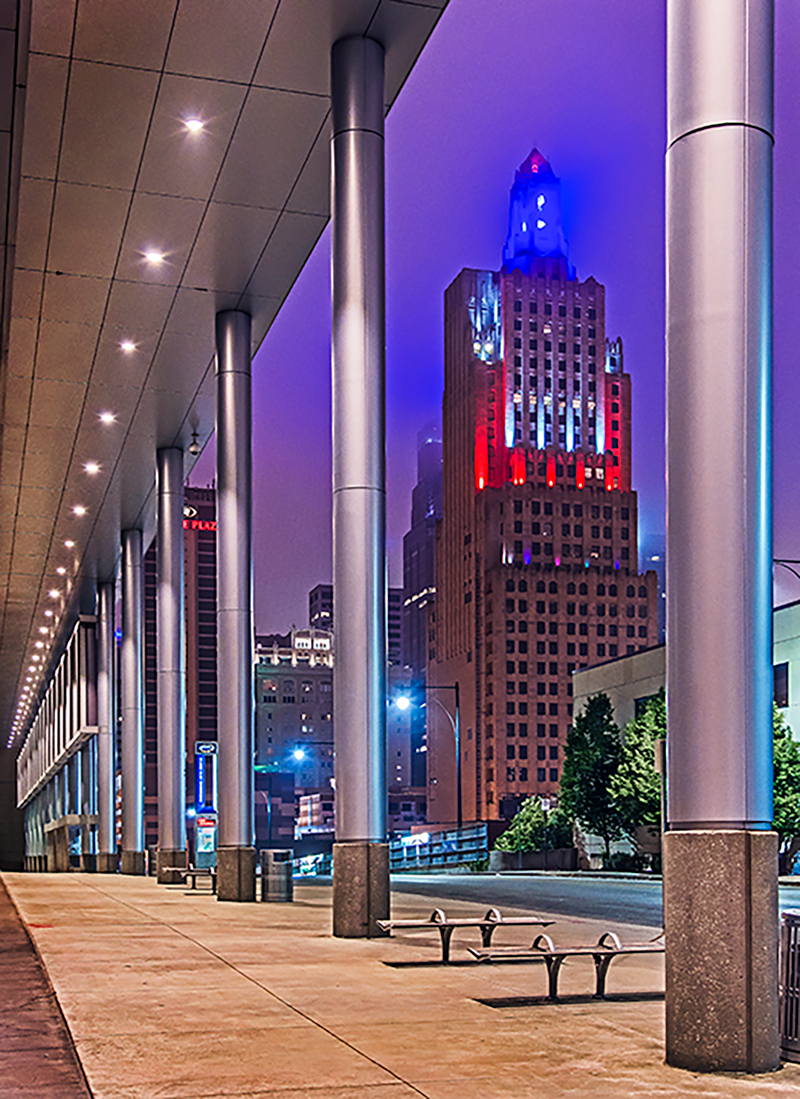 The Pride of a City

The sparkling new Kauffman Center for the Performing Arts, which opened in September of 2011, hosts more than 300 performances annually. The center took a significant step last summer with the installation of a system of 57 LED fixtures along with a DMX control system which can light the building in just about any color imaginable. Prior to the installation, laborers had to manually attach colored-gel film over each light fixture lens to provide color.

“Our lighting system is used to support activities and events that are hosted at the Kauffman Center, which takes priority for the organization,” says Paul Schofer, president and CEO. “That said, we do work to participate in city-wide illumination opportunities that elevate Kansas City and the Kauffman Center regionally and nationally. Most recently, that has included illuminating the building in support of our home teams—the Chiefs, Royals, and Sporting KC.”

The 89-year-old Power & Light Building has used exterior lighting to great effect for decades. In the past, it used various light colors to show the city what the forecast weather was going to be (for instance, white light signified coming snow). When the building was renovated in 2016, a large number of LED lights were added to the exterior, allowing for a vast array of colors shooting up the walls of the structure’s upper sections.

Today, the building houses 291 apartments and includes a large event space. Part of the rental package for events is the option to choose which color or colors the building will be lit on the date of the event. Otherwise, the iconic structure is highlighted in the colors of one of the city’s favorite sports teams, or to commemorate a special date or charitable cause.

“If nothing else is going on, our default is rainbow colors,” says Lauren Arntsen, community manager. “I think it’s wonderful. It gives the community something to talk about and look forward to.”

Interestingly, it was a bolt of lightning that prompted an upgrade of the neighboring Bartle Hall sky stations four years ago. A bolt struck and knocked out the lighting of one of the spires, and it was discovered how difficult it was going to be to replace.

“It was antiquated sodium-fixture lighting, like street lights,” Bosch says. “There was a lot of labor in changing bulbs. So we switched to LEDs that have a large range, and there are thousands of colors on a computer in the security offices inside Bartle Hall. It just provides a multitude of options.”

Bosch also discovered that the 14-inch spotlights that had been used to illuminate the 30th-floor observation deck at City Hall dated back to the 1930s and, not surprisingly, had stopped working. Four years ago, the city purchased a series of LED fixtures which can light up not only the 30th but also the 28th floor of the building in a multitude of colors.

“My goal in lighting City Hall was to highlight the architecture,” Bosch says. “I think it makes a big impact. And I think as buildings continue to be built in and around Kansas City, we will continue to look at ways to incorporate creative lighting into projects.”

If Kansas City’s iconic Western Auto sign were a movie character, perhaps it would be that of a proud grandfather, the patriarch of what’s become a luminous family of creative lighting that’s growing brighter all the time and transforming the downtown landscape into a sparkling city of lights.