At the onset of the lavish party he threw Saturday night at the Gem Theater, Calvin Arsenia paused to pay respects to his hometown.

During a recent month-long tour of Europe, he said, he was asked about Kansas City regularly. He concurred that the barbecue is great here, but he also reminded people of the city’s great jazz heritage—a history that prompted him to book his CD-release party for his sophomore album, Cantaloupe, in the heart of the 18th and Vine District.

“I want to be part of that history,” Arsenia said. Well, he is now.

For nearly two and a half hours, including an intermission, Arsenia and his large host of guest musicians threw more than just a party.

It was a lavish, grandiose gala, a visual and aural feast, starting with the stage décor: large swaths of pearly white silk suspended from the ceiling; a large Persian rug that became the main perch for Arsenia and his harp; flower petals strewn everywhere; an enormous screen at the back of the stage onto which images were projected; gusts of mood-setting fog; and all of it embellished by a deft, but not distracting, light show.

There were several wardrobe changes, starting with the black T-shirt that read “Thank You Kansas City.” From there, things got much more exotic: capes, long, billowy dresses with garish bows and other floral accessories plus various ornate headpieces.

Arsenia’s music is highly conceptual and genre-elusive, so the show was equal parts opera, symphony, musical theater, rock show, all built around its creator: a charismatic 6-foot-7-inch harpist with natural stage command and knack for gilding gold and painting lilies.

The ensemble behind him was more of an orchestra than a mere band: horn section, string section, backup vocalists, vibraphonist, electric bassist and guitarist, upright bassist, electric keyboardist. 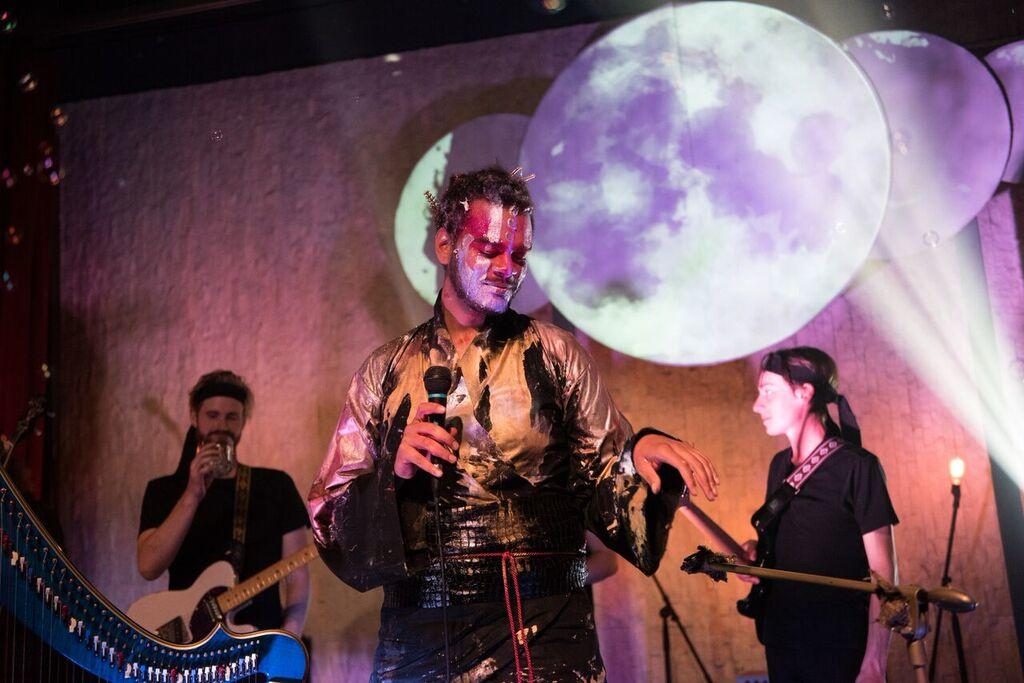 With precision and force, they brought out the shifting dynamics and elaborate colorings of Arsenia’s compositions, which can range from pastoral folk renderings to onslaughts of organized mayhem.

Later in the show, he coaxed the crowd into giving the band two ovations, after expressing his sincere gratitude for their assistance in this project but also for being eminent, dedicated parts of our city’s excellent music community every day of the year.

They would perform Cantaloupe in its entirety, including his deranged and sexually-charged makeover of Britney Spear’s Toxic, which included riveting performances by four pairs of tango dancers. On a night of many highlights, this topped them all.

Several other covers were added to the set list, including Venus as a Boyby Bjork, who is clearly an inspiration. Accompanied only by pianist Charles Williams, Arsenia opened the second half of the show with a splendid cover of Jacques Brel’s Ne Me Quitte Pas, one inspired by a Nina Simone version, he told the crowd.

Then he summoned Kansas City native and fellow music provocateur Krystle Warren to the stage for a duet version of Radiohead’s No Surprises, featuring Arsenia on electric rhythm guitar. Their voices blended perfectly.

He ended the show with the album’s title track, the lone time a banjo made an appearance. Proving there is no excess like too much excess, the 18-piece orchestra was accompanied by a small army of string players who entered through the back of the theater and performed from spots throughout the room. Sometimes more is better.

The song Cantaloupe is a play on words: We can’t elope / As simple as it’d be / Where’s the fun in it if we can’t flaunt a bit?

In other words, why waste a perfect opportunity to throw a spectacular party and celebrate with friends and people who love you? Which is what this ceremonial night was all about.

It would have been the perfect close to a memorable show, but Arsenia wasn’t done yet. After he took his final bow, waving a gold Trident spear, he marshaled everyone out of the theater and into the lobby, where the Marching Pythons drum team awaited. After performing for bit inside, they led the crowd out onto 18th Street in front of the theater, then on a parade around the block.

It was the ultimate and perfect flaunt, an ideal way to end this grand evening, which deserves a place of its own in 18th and Vine’s history.