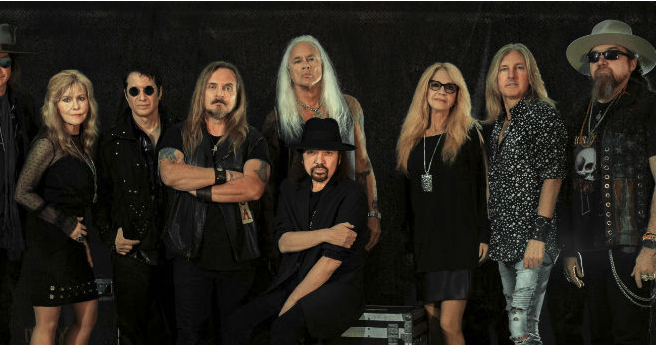 If I’d received $1 every time I heard a witless fan at a concert trying to be funny by shouting “Free Bird” as a request I could have bought a dozen Lynyrd Skynyrd hoodies (at $65 per) at Sprint Center on Friday and had enough left over to buy a $30 concert T-shirt.

Skynyrd, for some reason, became the brunt of weak jokes and snarky disdain among music fans with little or no appetite for classic Southern rock.

Friday night, the latest (and final) iteration of the band brought its swan song, The Last of the Street Survivors Farewell Tour, to Kansas City, drawing a crowd in excess of 11,000 that paid its respects in gratitude, ovations and several loud and hearty sing-alongs.

They played for more than 35 minutes, but their set list comprised only four songs, and, very disappointingly, Heard It In a Love Song, wasn’t one of them.

However, they larded Take the Highway with a flute solo that approached five minutes. As expected, their two other big hits, Fire on the Mountain and Can’t You See, were greeted warmly.

Next came Jamey Johnson, a headlining act on his own. The burly, mountainous country-rock singer-songwriter (and ex-U.S. Marine) from Alabama isn’t exactly a Southern rocker, but his music meshed perfectly with the rest of the bill.

For 70 minutes, he and his large band entertained the nearly full arena with a mix of originals and covers.

Johnson is an outlier in the modern-country world. He has cracked the Top 10 on the county charts only once, in 2008 with the ballad In Color from That Lonesome Song, his second album. Johnson has not released a studio album since 2012, and that was a tribute to Hank Cochran.

Nonetheless, he has sustained a loyal following. The crowd gave In Color, High Cost of Living and That Lonesome Song big ovations and sing-alongs.

But the heart of his set comprised several covers, starting with his spot-on two-song tribute to Tom Petty: Room at the Top, which felt more mournful than the original, then a Southern-fried rendition of Mary Jane’s Last Dance. “God, I miss Tom Petty,” Johnson lamented afterward. Cue a loud ovation.

Johnson also paid tribute to another friend, songwriter Tony Joe White, who died recently. His perfectly wrought version of Rainy Night in Georgia was the evening’s most memorable moment.

He broke the melancholic mood with a robust cover of Jerry Reed’s Eastbound and Down, then closed with a relatively obscure Skynyrd song, the somber hymn Four Walls of Raiford, a tale of a hardened prisoner (and Vietnam vet) who’s preparing to meet his maker.

After a 25-minute break, the latest and last version of Lynyrd Skynyrd barnstormed the stage. They are a seven-person band now, led by lone founding member Gary Rossington and lead vocalist Johnny Van Zant, brother of founding lead vocalist Ronnie Van Zant, one of three band members who perished in a 1977 plane crash that put Skynyrd on hiatus for a decade. Nearly a dozen band members and former members have died since 1977, and each was memorialized in a video tribute late in the show.

They opened with the hard-charging Working for MCA, a deep cut from their sophomore album, Second Helping. Like everything that would follow, it was stocked with many classic Southern rock traits: brash vocals, guitar jams, blues- and boogie-based rock or deep Southern soul.

This version of Skynyrd is taut and polished. Rossington shared leads with Rickey Medlocke, former Blackfoot guitarist and Skynyrd member since 1996, and to a lesser extent Mark Matejka.

And Johnny Van Zant more than adequately approximates his brother’s voice and commanding stage presence. He had vocal assistance all night from two backup singers.

They played all the hits, starting with What’s Your Name, then Saturday Night Special, a rare gust of Southern sentiment for gun control.

Before Red White & Blue (Love It or Leave), Van Zant paid tribute to members of the U.S. military, support he re-enforced via the American flag on the back of his leather vest and the flag/scarf draped on his microphone stand that later would morph into a hybrid of Old Glory and the Confederate flag, which would make a brief appearance on its own.

There were plenty of highlights amid a set list that showcased Skynyrd’s ability to swing effortlessly from hard-rocking anthems to soulful ballads: from Southern-boogie jaunts like I Know a Little, Don’t Ask Me No Questions and Call Me the Breeze, a J.J. Cale cover that featured some stellar keyboard stylings from P-Funk alum Peter Keys, to their timeless, soulful ballads, like Simple Man, The Ballad of Curtis Loew and the plaintive lament Tuesday’s Gone.

Behind the band, a video screen broadcast a variety of images, including footage of the band pre-1977. Ronnie Van Zant would join in vocally and virtually a couple of times, most notably during the encore.

They closed the first set with a ferocious rendition of Sweet Home Alabama; Van Zant invited the crowd to roar the line about Neil Young back at him, and nearly everyone in the place obliged.

The encore was a delirious 12-minute version of Free Bird, which included a furious jam from the three-man guitarmy, plus Ronnie Van Zant’s guest vocal appearance, which closed the song.

It was the perfect way for Skynyrd to say farewell, for the night and, perhaps, for good: a classic rock song no one had to request and the one song everyone came to hear.

Jamey Johnson: Keeping Up With the Jonesin’; High Cost of Living; By the Seat of Your Pants; That Lonesome Song; Room at the Top; Mary Jane’s Last Dance; In Color; Rainy Night in Georgia; Eastbound and Down; Four Walls of Raiford.