Both produce the kinds of songs that are built to please: melodic, manicured, risk-free ballads and anthems that bear no menace, leave no bruises, break no skin, and spark fleeting emotions and moods, from melancholy to glee.

Both bands are likewise pleasant and polite—the boys in leather jackets you’d let keep company with your daughter because they hold the door for her and mean it when they say “thank you” and “please.” 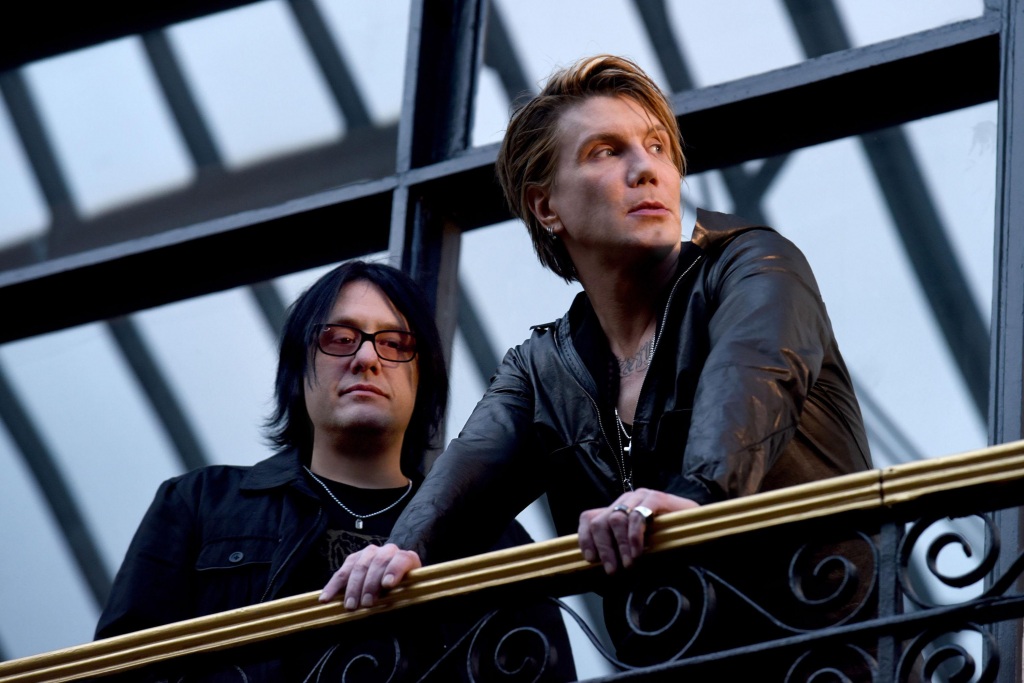 After an opening set by soul singer Allen Stone, Goo Goo Dolls took the stage. Founding members Johnny Rzeznik and Robby Takac started the band in Buffalo, N.Y., in 1986. They got little traction until the mid-1990s, when the A Boy Named Goo album dropped a few songs on the alt-rock charts.

Their breakout came in 1998, when Iris, a song written for the City of Angels soundtrack, went bonkers, breaking into Top 10 charts worldwide, including four U.S. charts, and going platinum or gold in six countries. It also helped the Dizzy Up The Girl album sell more than 4 million copies, setting the Goo Goos off and running—a bar band playing arenas.

Friday’s set was stacked with such hits and favorites, songs that prompted hefty sing-alongs, such as Slide, Black Balloons (which featured a launch of a couple dozen black balloons into the crowd), Name, Better Days, and Stay With You.

Takac, barefoot and in jeans cut off below the knee, took lead vocals on a couple of songs, including Bringing On The Light. Rzeznik sang a couple songs solo acoustic, including Sympathy.

After Miracle Pill, the brand-new upbeat title track from their upcoming album (which sounded like a good Train song), they finished with a flourish, upping the ante with each number: their cover of Supertramp’s now seemingly omnipresent Give A Little Bit; Better Days (their last Top 5 hit); Iris, which ignited a sing-along that no doubt awoke any slumbering creatures in the nearby Kansas City Zoo; and, finally, Broadway, one of four Top 5 songs from the Dizzy album.

Dusk was creeping in by the time Train took the stage. Lead vocalist Patrick Monahan started the band more than a quarter of a century ago in San Francisco. Twenty-six years (and one hiatus) later, he is its lone founding member.

Its breakout came in 2001, when Drops of Jupiter went multi-platinum, air-dropping Train among a regiment of easy-listening smooth-pop bands, from Matchbox Twenty to Toad the Wet Sprocket and Vertical Horizon.

This was the band’s second appearance in Kansas City within 11 months: In July 2018, they played a 14-song set opening for Hall and Oates at Sprint Center. Nonetheless, Starlight was nearly full by the time Train’s set began.

They opened Friday’s 18-song show with Calling All Angels, a mega-hit from the My Private Nation album, the follow-up to Jupiter. 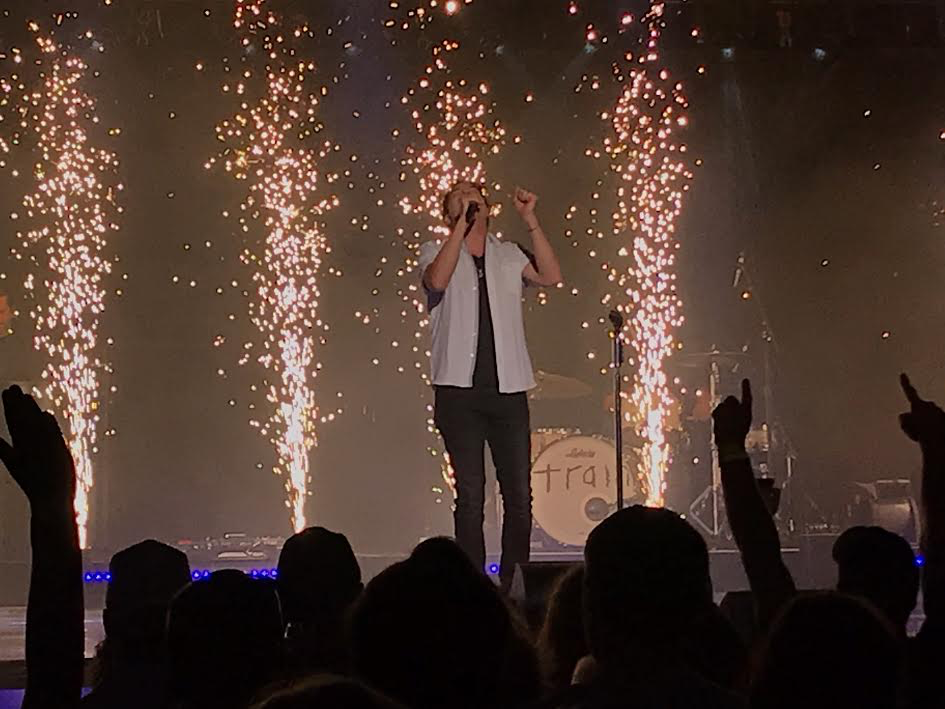 Decades of touring have honed Monahan’s stage act. He has the polished pose and poise of a game-show host, always at-ease, whether singing or chatting between songs.

The set list drew heavily from Save Me, San Francisco, now 10 years old and Train’s last platinum album: the title track; If It’s Love, a fan favorite despite lyrics like “While everybody else is getting out of bed / I’m usually getting in it / I’m not in it to win it”; Marry Me, a slab of 70s-era soft rock; and the barn-burning roof-raising Hey, Soul Sister, a song with a lyrical depth that is inversely proportional to its wildfire popularity. 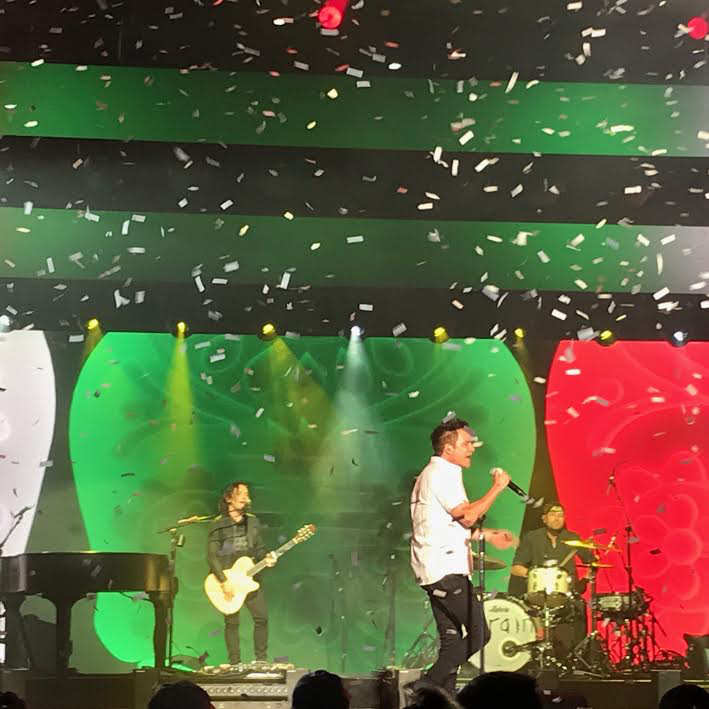 They dropped two covers into the set, three if you include Great Escape from Monahan’s Last of Seven solo album: Guitarist Luis Maldonado exhibited some vocal chops during the cover of the Queen/David Bowie classic Under Pressure; and Monahan led the band through a by-the-numbers rendition of Tom Petty’s American Girl, adding a few measures of Free Fallin’ to the end. Mercifully, Train did not reprise anything from its Led Zeppelin tribute album.

Other highlights: Bruises, in which Allen Stone returned to the stage to show off his voice; Cab, which evoked a slight but endearing resemblance to Steely Dan’s Doctor Wu; and Drive By, a burst of disco/dance-pop that could have been a Scissor Sisters cover. The flash pots added to the jaunty mood.

They ended the night by dancing with the gal that brought them: Drops of Jupiter, another blast of low-cal easy-pop bliss. The girl in that song “acts like the summer and walks like the rain”—unlike the bands on this bill. In the world of the Goo Goo Train, it’s always sunny, and the skies bear no clouds.