Lori Chandler is back in the live-jazz business.

Chandler, who co-owned Take Five Coffee + Bar for more than five years with her husband, Doug Chandler, announced on Oct. 1 that she has started Take Five Music Productions.  The enterprise will organize jazz events in venues large and small around the Kansas City area.

Allison Miller’s Boom Tic Boom, a jazz ensemble led by drummer Allison Miller will perform at 7:30 p.m. Oct. 16 at the Musical Theater Heritage in Crown Center. This concert will be presented in conjunction with the Jeff Harshbarger Presents series, founded by Harshbarger, a jazz bassist. Tickets are $20 and $25.

Peter Schlamb, a stellar vibraphonist from St. Louis, will perform at 7 p.m. October 28 at the Brewhouse at Brewery Emperial, 1829 Oak St. Cover is $10.

Thollem McDonas, an avant-garde jazz pianist (and author, actor, composer, and political activist) from northern California will perform at 8 p.m. Dec. 1 at the new YJ’s Snack Bar, 1746 Washington St. A $10 donation at the door is suggested.

New Jazz Order Big Band Presents Ellington’s Nutcracker will be staged in the Martin, the event space at Martin City Brewing Co., 500 E. 135th St. The Jazz Order Band is under the direction of the Kansas City Jazz Orchestra’s director, Clint Ashlock, and features many of the best jazz musicians in Kansas City. The show is at 7 p.m. Dec. 9. Cover to the family-friendly event is $15 for adults, $10 for children 15 and younger.

The Chandlers opened the first Take Five Coffee + Bar at 151st Street and Nall Avenue in Leawood in January 2010. The response was so good they moved to a larger space in Corbin Park, 6601 W. 135th St. in Overland Park in early 2014. They closed that operation in August 2015, citing a variety of issues, including location and the delayed openings of other businesses in the center, which reduced expected foot traffic.

In a press release, Lori Chandler said she started Take Five Productions because “there hasn’t been a true listening room routinely booking jazz.

“Additionally, it’s rare for national touring acts to visit Kansas City outside of the Folly’s Jazz Series. Lastly, if a local artist wants to stage a special event the burden to book and market that event falls 100 percent upon the musicians, many of whom simply don’t have the bandwidth or desire to take on such a project.”

Chandler can be reached at takefivemusicproductions@gmail.com or at 913-269-7537. 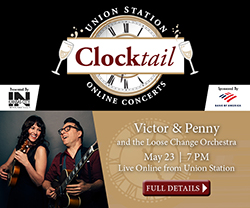