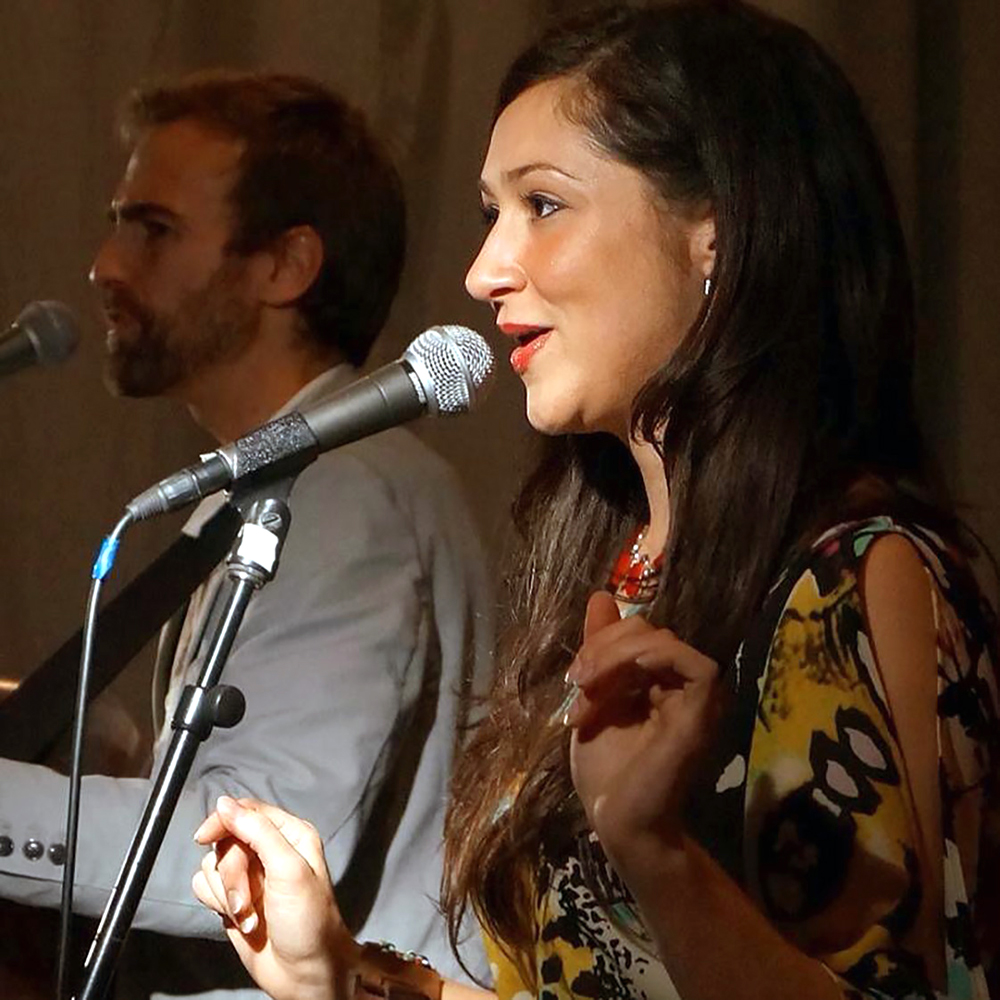 Shay Estes has been singing to Kansas City since the turn of the millennium, going back to her days in rock bands, such as the Von Hodads and the Silver Shore.

In 2004, her music focus took a precipitous turn. She took a gig that required her to sing outside her comfort zone, which eventually led her into the world of jazz.

Since then Estes has performed with some of Kansas City’s best jazz ensembles and musicians. Among them: The People’s Liberation Big Band of Greater Kansas City, the Barclay Martin Ensemble, Arara Azul, Fado Novato, Shay Estes and Trio ALL, the Brad Cox Ensemble, and the Matt Otto Sextet.

Estes recently answered questions from IN Kansas City about her early music influences (country was a big one), her evolution as a jazz singer, her immersion in Brazilian/Portuguese music, and her other love: animals (especially horses).

What bands, singers or songs/albums first inspired you to pursue music as an endeavor?
SE: Patsy Cline. I’d stand at the top of the stairs in our house when no one was home and belt songs at the top of my lungs. I wanted to be a country star when I was a kid, so much. We’d go to country concerts after a rodeo, and I’d sing so loud, hoping they could hear me from the stage.

What and when were your first band/live performance experiences?
SE: I joined a country band when I was about 10 or 11. Most of the folks in the band were in their 60s, and we played at nursing homes, craft fairs, tiny oprys in tiny towns. Before that, it was school talent shows and performances, and dance recitals. I loved being on stage.

The first time I met you and interviewed you, it was to write about a rock band you were in, the Von Hodads. What do you remember about those experiences and how did they prepare you for the vastly different music world that you pursued?
SE: I think it got me past the strange fear of intimate performance. There is a comfortable barrier that exists in a large theater between the performer and the audience. They are seated away from you, and the lighting is typically such that you cannot see their faces—they are often strangers. You may never even see or speak to someone you perform for, so your ability to connect with them is based purely on what you give them onstage, and nothing more.

There is also the separation of character. In playing a role, you’re somewhat protected from allowing someone to see or judge you. They can evaluate your performance or your skill, but your emotional self, your personality, your daily actions have little bearing on how they feel about your work. That is a part of you that can reveal itself as much as or as little as you choose.

Playing small venues, you’re in touching distance of the audience, and you can see right into their faces. To take something you’ve created out of your heart and brain, stand in front of a roomful of your peers, and ask them not just to pay attention, but to like it, to like you in your most raw and real sense—that was one of the most terrifyingly vulnerable things I could’ve imagined. It still gives me little flutters sometimes, but I try to channel it into good performance energy.

What inspired you to turn to jazz as a vocalist and about when did that happen?
SE: I can tell you exactly. It was spring of 2004. I got offered a really well-paying gig for the Von Hodads to open for a traveling burlesque troupe that was also touring with the Grand Marquis. I couldn’t pin all the members down about it, so I said, “Eff it. I’ll still take the gig.”

[Mark] Southerland and I put together a book of standards, and I started looking for a piano player. I asked around for a player that was young, fun, not stuffy, could play his ass off, wouldn’t mind doing a cabaret-style gig, and liked to drink whiskey. About ten different people pointed me to Mark Lowrey.

The Marks and I rehearsed for a month, played our 45-minute set on June 5th, and each made $500. After that, Lowrey asked if wanted to do more gigs together, and I thought, “Why not?” So we got some smaller gigs, then we got a monthly at Jardine’s, and it all kind of progressed organically from there.

What was the most difficult or intimidating part about navigating that transition?
SE: It took me time to become comfortable with the improvisational nature of jazz. I was constantly worried about missing entrances or losing my place. I was so used to structured song form and length that I had to sing the song in my head while people soloed so I would know where in the form we were.

I was also afraid of not being a competent musician in the genre. Most of the guys I played with had not only played jazz for years but had studied it in high school and college.

We didn’t even listen to jazz in my house growing up. I don’t think I heard Ella Fitzgerald until I was 23. It’s an intimidating world to step into, and it can be a bit of a boys’ club at times. I just spent my first few years trying to keep my head above water.

Who first helped, advised, and encouraged you during that time?
SE: Mark Lowrey, Mark Southerland, and Jeff Harshbarger were the entire reason I was able to survive and thrive. My first quartet was with Lowrey, Jeff, and Mike Shanks, and we were together for years.

Those guys held my hand and let me make all the mistakes without too much fear of judgment. It was a long time before I played with any other chordal players.

Southerland was a mentor for me. He was a great sounding board and professionally pushed me again and again beyond my musical comfort zone. In 2007, he introduced me to Brad Cox, and that man changed my musical life. So much of who I am is because of those guys.

What precipitated your enthrallment with Brazilian/Portuguese music?
SE: I was loosely familiar with bossa nova and had certainly heard some of the classic Jobim recordings with Astrud Gilberto and Elis Regina. But it really happened when I saw a Djavan video on YouTube.

I was researching music for an ocean-themed gig, and I stumbled across this video of a man I’d never heard, playing guitar and on stage by himself, and it was so haunting and beautiful. And everyone in this huge audience knew every word to the song, by a man I’d never even heard of, and I was smacked in the face by exactly how small my world-view was.

So I learned that song, then I sort of fell down a rabbit hole. I was voraciously consuming every new artist and genre and album I could find, and I wanted to learn all of it.

Describe as pithily as you can the heart/soul of that music.
SE: Ha. Me, pithy.

The vast majority of Brazilian musical styles derive from samba, and in the heart of samba is an understanding of the inherent cruelty and sorrow of living.

“Sorrow has no end; happiness does.”

Basically, life sucks, we’re all poor, so let’s dance and make music and make love because it’s how we can make and create enough moments of joy to keep moving through this life.

You married a drummer—and a Brazilian—Giuliano Mingucci. From the perspective of a singer, what are some of the traits of an elite drummer or percussionist?
SE: Time. Time. Time.

Time, feel, and groove. You can have fancy chops all day long, but if I don’t trust where your one is going to be or you’re not in the pocket, it’s just not going to soar or glide. There are definitely times where the feel can be loose and flexible, but as a general principle, solid time is so important.

The drummers that really pay attention, keep the groove locked in tight, and give space for others to move are the ones who make every else’s job so delightfully fun. Fortunately, we are spoiled for those kinds of drummers in this town.

You are also an avowed lover of animals and an equestrian. What do you love most about horses? And what makes critters so indispensable to your life?
SE: I bought my horse, AJ, when I was ten and he was five. I lost him a year ago in January, just shy of his 33rd birthday. Twenty-eight years is a long time to be together

There’s a longevity to the human/horse relationship that doesn’t exist with many other domestic mammals, and the need for trust is so much greater because of what you are asking each other to do. In short, it’s a promise you make to one another. “If you keep me safe, I won’t ask you to do anything that won’t keep you safe. I will take care of you; please take care of me.”

A bond like that maybe comes along once in a lifetime. Twice if you’re very lucky. You spend years building that relationship, learning how to tell tiny changes in the other by feel and energy alone. It’s hard to describe, but it’s very vulnerable and very empowering at the same time.

As for other critters, dogs are essential. Dogs are as necessary as breathing. I feel like people either understand this or they don’t, so I don’t need to go into that.