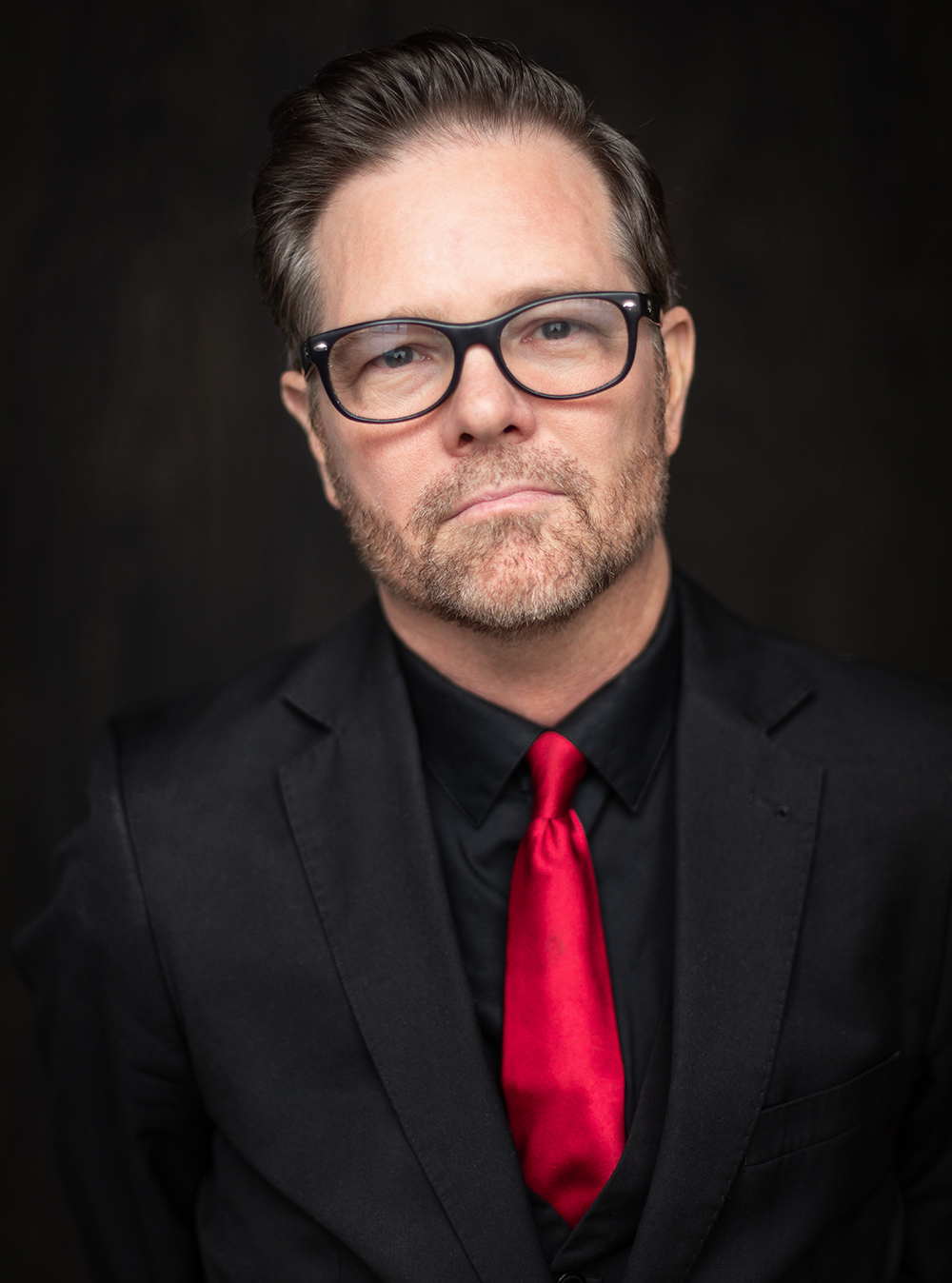 David George lived an itinerant life growing up, moving from Kentucky to Ohio to Missouri to Washington state to California—wherever his father’s job with Hallmark took them.

But one thing was constant: his deep interest in music. These days, the Rockhurst High alum is focused full-time on presenting his original musical, Christmas Ain’t A Drag, in New York in December.

He recently answered questions from IN Kansas City about his many musical adventures, his gig with John Fogerty’s touring band, and the ten-year odyssey that resulted in his creation of a lively, secular Christmas musical.

When did music enter your life and become a serious pursuit?
I knew I wanted to do something in music when I pointed out to my dad that I wanted to be the guy on the TV during the Notre Dame football games. It was the drum major; I was 3. I had piano lessons soon after. I took banjo lessons at 13 and later taught myself guitar. However, I set music aside after college to pursue a film career when I moved to Hollywood.

But music reared its head again when I met a like-minded buddy in Los Angeles. We started as an acoustic duo called The Chaneys that grew into a full band loaded with three-part harmonies. We were nominated by the National Academy Of Songwriters as “Best Vocal Group.”

I struggled with wanting to be a filmmaker or musician. Eventually the Chaney’s broke up, and I moved back to Kansas City after forming a band called Deege.

Who are some of your biggest influences, musically and otherwise? Favorite songwriters?
I think Gene Kelley was a huge influence. He did everything—sing, dance, write, produce, and direct. I was fortunate to have met him before he passed, an incredibly gentle and humble man.

It’s really hard to narrow down my main influence. I love hard rock, country rock, and everything in-between. After watching Hee Haw, I made my parents get me a banjo and lessons. Roy Clark was amazing and I wanted to be him. Musicals, from The Sound of Music to Oliver, were always playing on our turntable.

What was the first album you owned? The first you bought?
My parents were members of Columbia House and we had all the great albums of the time. Rolling Stones, Led Zeppelin, Blood Sweat & Tears, Neil Diamond and many others. It was a hodgepodge of pop, rock, and musicals. The first album that I called my own was KISS’s Destroyer. I won it while listening to KY102. The first album I bought was probably Billy Joel’s The Stranger.

You spent several years working in the film industry in L.A. What did that experience teach you?
It taught me that nothing is easy, and you can’t do it all yourself. Doesn’t mean you can’t wear many hats, just that it takes a team to create the final product. It might be one guy’s vision but there are a number of people who work to bring the artist’s vision to the screen. Same applies to creating a show or an album. You can’t do everything and having others who might bring something special to the table will only make the final product that much better.

List all of your notable bands and give a synopsis of each.
The Chaneys was my first band, formed in L.A. We struggled during the grunge era because we were different but we were fortunate to open for bands like America and Michael McDonald at the Ventura Theater.

Deege followed and brought me back to Kansas City. We had some demos and an EP. We played Spirit Fest and were offered to open for the Foo Fighters. That band soon fell apart and I formed Moaning Lisa. We recorded two full-length albums, one of them (Wonderful) won “Sexiest Album Cover” from Playboy.

Moaning Lisa moved to Los Angeles, chasing the dream, and we changed our name to Culture Killers. We were on our way to signing a decent deal with an independent label when our manager at the time decided he didn’t like it and pulled the plug.

I got tired of waiting around and went solo, recording my first full-length solo album Love/Life. Then I moved back to Kansas City.

I had been playing and recording with my solo band A Crooked Mile. We put out Radiant Man and did some killer shows from Kansas City to Nashville.

In the middle of all this I wrote a song for Kansas City to celebrate the Royals being in the 2014 World Series. Oddly enough it became the touchdown anthem for the Chiefs the following year.

You were also enlisted, for a spell, to play guitar in John Fogerty’s touring band. What was that like?
That was different from anything I’ve ever done. I had to learn 30-plus songs and perform for three hours a night, five nights a week. It taught me how to be a real musician and that it takes work, lots of work, to be on the big stage playing in front of 10,000 people every night. And I was on top of the world for a brief time.

What inspired you to write Christmas Ain’t A Drag?
I had a few Christmas songs that I’d written while in Los Angeles inspired by the Brian Setzer Orchestra’s Christmas show. I wanted to write and record Christmas songs that had the big-band/rock vibe and were more adult-oriented and not necessarily religious. Then I was offered a slot at the Record Bar and decided to put together a band. We performed five or six originals plus a few fun covers like Jingle Bell Rock.

The inspiration for creating the show came from a friend who was doing drag shows on Friday nights at Missy B’s, and I thought it would be a great twist if a drag queen was singing What’s A Naughty Girl To Do.

The next year I had an idea of what the show was and I came up with the title song for the show, Christmas Ain’t A Drag (…“when I’m with you”).

When did you begin working on it?
It’s been a work in progress for about ten years. Each year I’d write more tunes, usually, oddly enough, in the middle of summer, taking out the covers until I had an entire set of originals.

I started writing the dramatic portion a few years ago. I worked with a few New York theater directors over the past couple years as we tried to bring it to the stage in New York. They helped me hone the story and bring the characters to life. I also added one more tune because one character needed a little extra.

How long is it?
The two-act show, with 19 songs plus underscore, runs around 90 minutes with an intermission.

Distill its message or theme into a sentence or two.
Christmas Ain’t A Drag is an uplifting new big-band musical that celebrates the love, magic, romance, and acceptance that people search for at Christmas.

When and where did you debut it?
We did two shows at the Madrid in 2015—a sort of workshop by the seat of our pants. It was a completely different show from what it is today. Almost like a concert with dialogue in between linking the songs in a story.

How big is the band? What instruments are involved?
The Christmas Ain’t A Drag Orchestra is a nine-piece band with two trombones, sax, trumpet, keys, upright bass, drums, and me on guitar. The show itself features seven actor/singer/dancers.

How will you produce the event in New York? Will you use Kansas City or New York musicians?
All the cast and band are from New York except Adam Liebreich-Johnsen, who arranged the horns, is from Los Angeles. Hopefully in 2020 or 21 we will bring the show to Kansas City.

What have you learned from creating and producing this project?
It’s a never-ending cycle. Until the show actually begins, anything can change. And it will continue to change as it grows and gets tweaked. I don’t think any Broadway show is the same at the end as it was when it was first written. Words and music always come across different on the page then when they are heard out loud. It’s how we nurture what we’ve created that we see it fulfilled in its destiny.

Behind the Music: Julia Othmer

IN Conversation with Colin Dieden