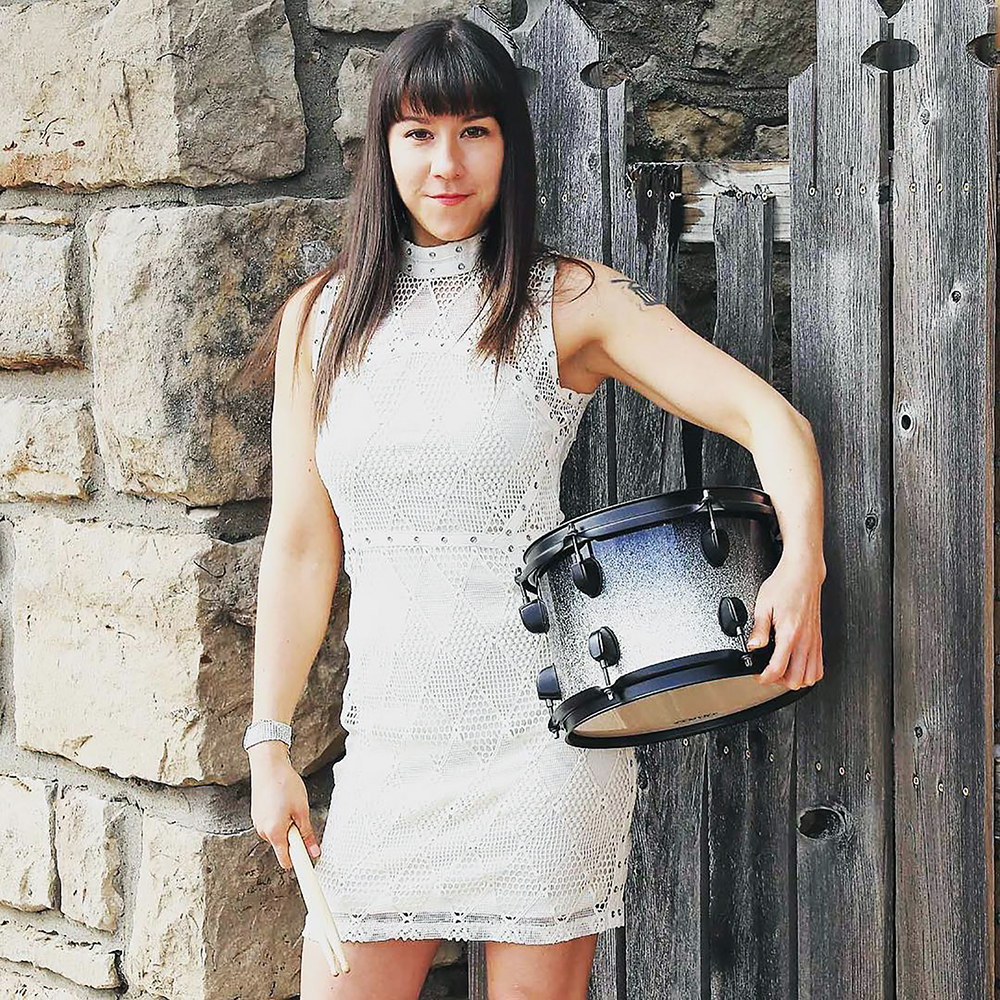 Candice Hill is something of a rarity in the music world: a woman percussionist whose repertoire includes the steel pan, a chromatically pitched instrument fashioned from an oil drum. She recently answered questions from IN Kansas City about her favorite instrument, her role as a teacher and mentor at Staley High School, and how she is navigating life as a musician during a pandemic.

Talk about your childhood. What was your upbringing like?
I grew up in Columbia, Missouri, raised by both my parents, who are still married today—44 years—and with an older brother, Chad. My mom was a teacher so she would get summers off with us, and I have very fond memories of summer activities growing up: lots of baseball and softball, playing outside, going to camp. I’d say I had a pretty great childhood, and my parents were always very supportive of my hobbies and interests.

When did music enter your life? Who were your earliest inspirations?
My mom played piano when she was young, and when I was very young, she would sit down on the piano to clunk out tunes she could remember. I really liked the piano, and they got me set up in lessons when I was 6 or 7.

My dad was actually the bigger music fan. He played drums growing up, and we would have dance parties at home to his “oldies.” My brother also had a radio, and then a record player and tape player, so I would listen to his music. It was pop when we were young and eventually he got into a Beatles phase, which rubbed off on me several years later, and then punk.

I also remember having this Fisher Price record player with mostly kids’ music. I was really into pop as well when I was young, like New Kids on The Block. The first CD I bought with my own money was Red Hot Chili Peppers’ What Hits. I later got really into Nirvana as well. I also listened to a lot of classical and jazz music, specifically Big Band era, which my dad was really into.

When and why did you decide on drums/percussion?
Even though my dad played drums, it hadn’t occurred to me to try them. When I was in middle school, I was playing saxophone and we had a parade coming up. The drumline needed a bass drum player, and it looked fun, so I volunteered. That was it for me; I loved it. My parents put me in drum set lessons the next summer. I expanded to all types of percussion, but pretty much only performed in school ensembles or church band.

Who are some of your favorite drummers/percussionists?
I discover new favorites all the time. I’ve always loved Buddy Rich, Dave Grohl, Gene Krupa, as well as some amazing instructors for Drum Corps International drumlines, like Scott Johnson, Bill Bachman, and Bret Kuhn.

In the last 15 or so years, I’ve become a fan of Liam Teague, a steel-pan performer. I also studied with Boogsie Sharp, and Robert Greenidge, the pan player for Jimmy Buffett, in grad school. More recently I have been into Vinnie Colaiuta, Neil Peart, Steve Smith, and Todd Sucherman.

When did you start playing steel pan? What drew you to it?
I started playing in a small steel band in college, and I had never heard of them before. I just remember thinking the sound was so unique, and after a couple years I was totally hooked. That’s when I got really serious about it and decided to focus on steel pan in grad school.

What’s the key or ‘secret’ to playing the steel pan? Do you prefer them to drums?
The biggest misconception from a technique standpoint is that it is not a drum. A lot of drummers approach it with a heavy hand and too much arm. So the secret to technique is to play more relaxed with more flexible wrists and fingers and a much lighter touch. From a musical standpoint, the key secret would be that the instrument knows no boundaries when it comes to musical styles. You can play any genre you can think of, and this really opens up the types of gigs you can play with it as well. It’s not just for pool parties.

I would say I almost prefer steel pan to drums because I know pans so well. I feel I can play any piece of music you set in front of me. On a drum set, I have certain styles I’m really comfortable with, and others not as much. The same goes for other percussion instruments. I am really comfortable on snare, for instance, and only somewhat comfortable on marimba. They all have their place in my world though. I usually find that when I’m playing a lot of pan gigs, I miss playing drums. But the opposite is true as well.

You teach at Staley High School. What are the rewards of teaching music?
I actually never thought I wanted to teach, and only started when I was in grad school as part of my assistantship. I really liked passing on my knowledge and passion. I teach the drumline and assist with spring ensembles at Staley, and the biggest reward is watching kids grow up through the program and grow to love music. Most of them do not go on to pursue music in college, but I know the dedication, passion, work ethic to show up on time, and the reward of working hard is instilled in them. Some of them do go on to study music, and that gives me warm fuzzies, but it’s not the ultimate goal for me as their teacher.

How have you been surviving the pandemic, as a musician?
I teach private lessons and was able to quickly switch online. It’s not ideal but it works in a pinch. I would say about a third of my students dropped at that time and all my gigs were canceled, so it was tough, and still is.

I’ve done online streaming shows and have gotten a lot of tips from people who just want to support in this time. I’ve started to get some outdoor gigs, so I’m hoping that continues to pick up. It’s a little rough though, because you are so reliant on the weather. I’ve gained a couple of students who preferred online lessons or live outside of Kansas City. I was not teaching online before this, so I’m really hoping to continue adding more online students that are not local.

That’s all financial though. As a musician, it’s hard not to create in some way. I’ve done some writing for the high school drumline, and I’ve been recording some solo videos for my YouTube channel, as well as some cool quarantine projects with other pan players. It’s been a mental game though, because with all the stressors the pandemic is causing, a lot of the time I just don’t feel inspired. That’s something I’m still learning to push through.

If you weren’t a musician, what would you be doing?
I honestly feel like music is the one thing I am good at. If not for music, I would likely be in library science in some way. I love libraries and research.

You are a woman in a field with a male majority, especially, it seems, in the area of drums/percussion. What obstacles or biases do you face and have things improved much since you became a professional musician?
The first time I ever really noticed it was in middle school. I remember the section leader of drumline being relentless with his comments about me being a girl and how I made dumb faces when I played.

I’ve had my fair share of stupid comments over the years. Some things like “What does this girl think she’s going to do?” when they see me sit in with a friend’s band, only he used a nastier word than “girl.” I’ve been asked if I’m with the drummer—I think every female drummer has heard that one—and was always teased for having that “tough” face when playing in drumline. Literally every guy in the line was making a stone face, but some guys liked to tease me and tell me to smile, and that I was too little and cute to be tough.

I get the whole “Oh my god it’s a girl playing drums!” reaction a lot, too, but I usually think that’s pretty nice. Honestly, it has bothered me from time to time, but mostly I just like to prove people wrong. It truly was something that happened more in my youth. I have the belief that my playing will speak for me, and if people like it, cool. If not, that’s cool, too.

In bands of all men, at first they generally try to be really polite and save the “guy” talk. Then after a while they realize I’ve been playing music with men for decades, there’s not a lot I haven’t heard, and I’m not easily offended.

As a teacher it has been mostly positive. I teach a drumline full of boys and only one girl. They are pretty respectful through it all. I think kids now have more female music teachers in general, so it doesn’t faze them at all. As a private teacher, I have a decent number of girls who take lessons, and their parents picked me specifically because I’m a woman. I think it’s because they feel more comfortable with that for their daughter, but also because they want their daughters to see there’s no reason they can’t play drums.

What do you like most about life as a musician in Kansas City?
Opportunity. Before COVID, there were lots of venues, arts organizations that support musicians—and pay them—as well as lots of kids wanting to learn to play drums. It can be tough, because you have to constantly work to get more gigs, but that’s true anywhere. I just feel like there’s usually so much going on here, yet it’s small enough that you can gain some recognition, even with a smaller following.