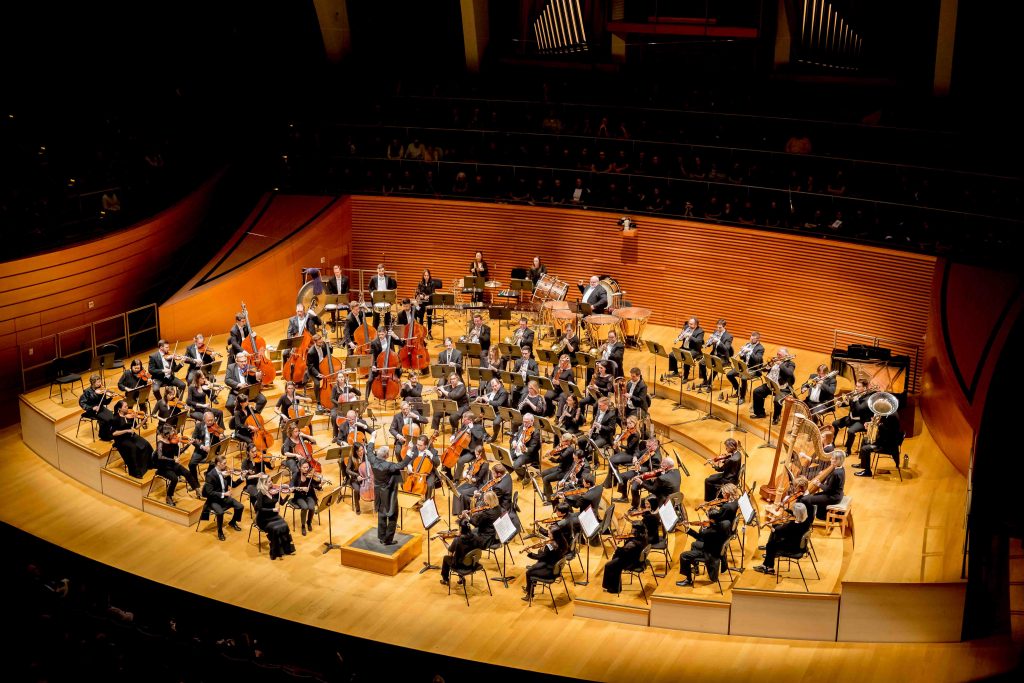 If you happen to be a Francophile who also loves American music, Kansas City Symphony conductor Michael Stern put together a program just for you. Stern told the audience that he characterized this weekend’s concerts at Helzberg Hall as “France and Dance,” featuring three French masters and one of the greatest American composers, Aaron Copland.

Copland’s Appalachian Spring is my all-time favorite piece, full stop. He single-handedly answered the question of what makes American music “American” with this flawless score for a ballet choreographed by Martha Graham and premiered in 1944. It’s special, it’s adored, and it really hasn’t been surpassed. For those who have heard this piece for years, you already start to get a little emotional when the strings play that opening A note and the clarinet enters.

Performed after intermission, the Kansas City Symphony’s otherwise excellent performance of Appalachian Spring was not without missed opportunities. A few entrances here and there were either too heavy, too wonky, and in one instance, maybe too early to my ears. But those are mere quibbles when you can immerse yourself in music this iconic. Because it can be sometimes drowned out in recordings, I loved how I could hear the piano parts that augment the percussion section, and the big climax to the tune of Simple Gifts was superbly handled. 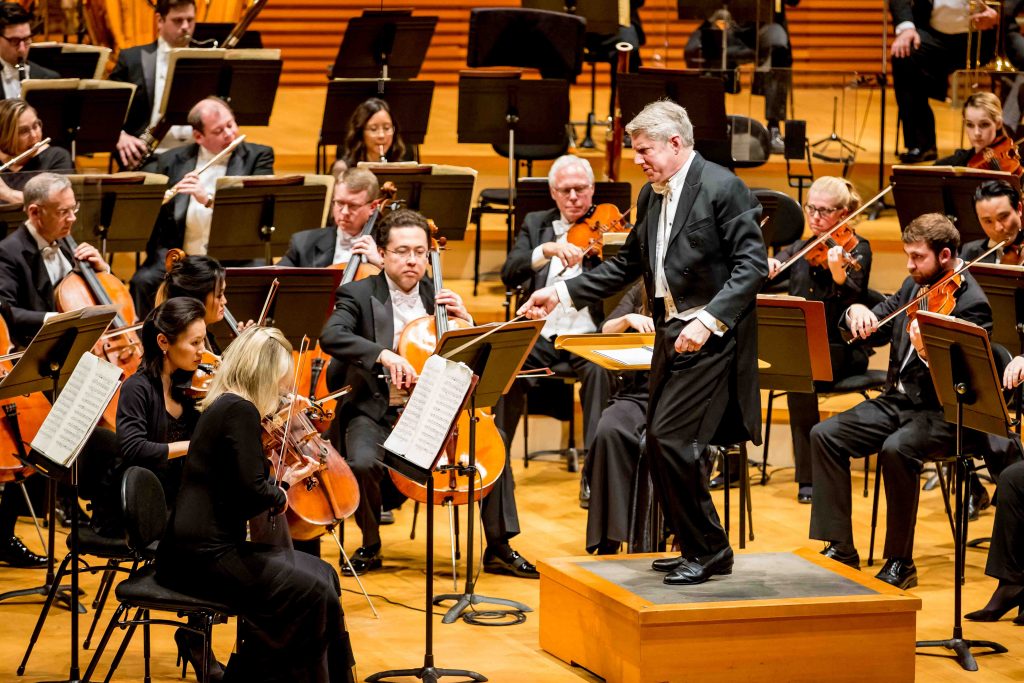 But it’s what comes after Simple Gifts, when that music fades away and the strings play those gorgeous harmonies, where you find some of the most magic in that score. And the orchestra captured that magic in the final section. The famous polychord that starts the piece is the one that ends the piece, only in a different key, and the last few bars were conducted and performed beautifully.

The first half of the concert began with another 20th-century ballet score, Le Bœuf sur le toit (The Ox on the Roof) by the prolific Darius Milhaud. With its punchy Brazilian rhythms, seductive strings, and comically dissonant interjections by the woodwinds, the orchestra played this quirky opener with requisite panache and raucousness. 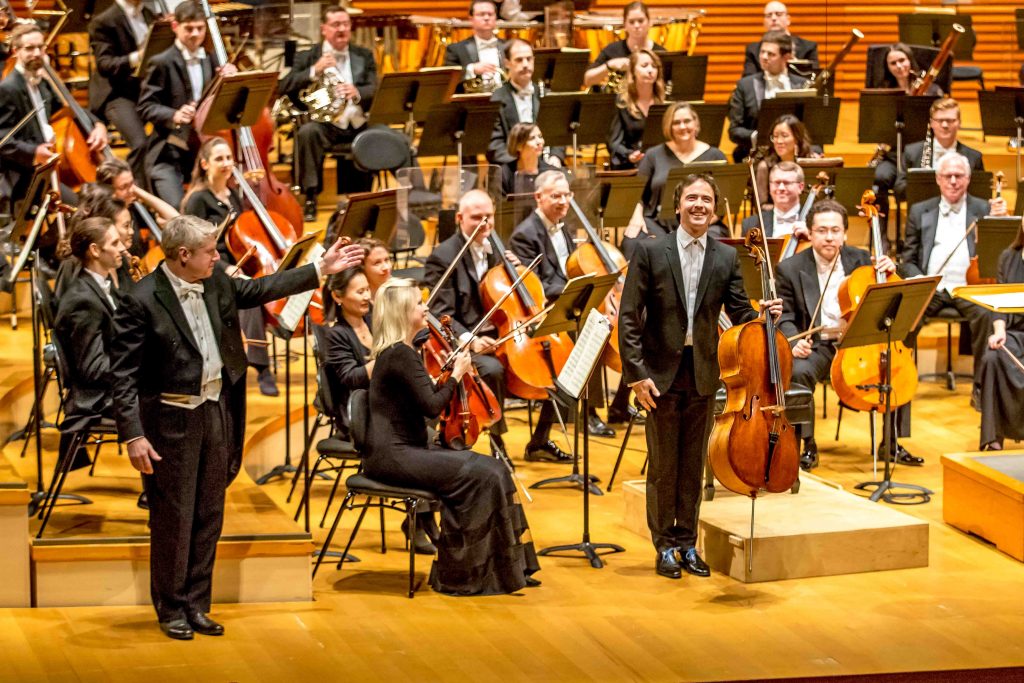 Guest soloist Jean-Guihen Queyras followed with a marvelous rendition of Edouard Lalo’s Cello Concerto (1877), written two years after his celebrated Symphonie Espagnolefor violin and orchestra. Not one to gesticulate wildly on stage, the Frenchman sat on a piano bench on top of a podium and let the music do the talking. Lalo’s score does rightly allow the cello to do most of the heavy lifting, but the orchestral accompaniment was on point for Queyras throughout, particularly in the quieter moments with muted strings. Some of the loveliest interplay in the repertory for solo cello and orchestra resides in the sections marked “Allegro presto” in the second movement, and it was performed with zest and a delicate touch here.

Before his encore, Queyras addressed the audience and said he hadn’t stopped raving about the orchestra, the hall, the museums, and the restaurants the whole time he was in Kansas City. He then closed the first half with one of cello music’s greatest hits, the Prelude to Bach’s Cello Suite No. 1 in G major.

To round out the “France and Dance” theme, Maurice Ravel’s La Valsefrom 1920 is one of those buckle-up-and-hold-on showpieces for orchestra that never fails to amaze. Written shortly after World War I, this is Ravel at the height of his brilliance as an orchestrator, and it’s the perfect allegory of a world that had spun out of control, a waltz that gets more demented and twisted rather than buoyant and genteel. He basically shattered an entire genre in 12 incredible minutes, and to pull this off, there has to be an almost off-the-rails energy to the orchestra. The musicians made the technical demands seem like a breeze and it was the strongest performance of the entire concert, from the off-kilter echoes of waltzes gone by to the chaotic conclusion.

Having Appalachian Spring and La Valse in the same season is a big deal as it is. But to hear them in the same concert is something to treasure.