Park University’s International Center for Music’s inaugural “Stanislav and Friends” benefit concert last year was extraordinary. Patrons had a once-in-a-lifetime opportunity to sit on stage mere feet from renowned musicians as they played. This year’s performances will be even more noteworthy—pun intended—because of the event’s locale, says Park ICM’s executive director Lisa Hickok. “We all need something to bring us together right now,” she says. 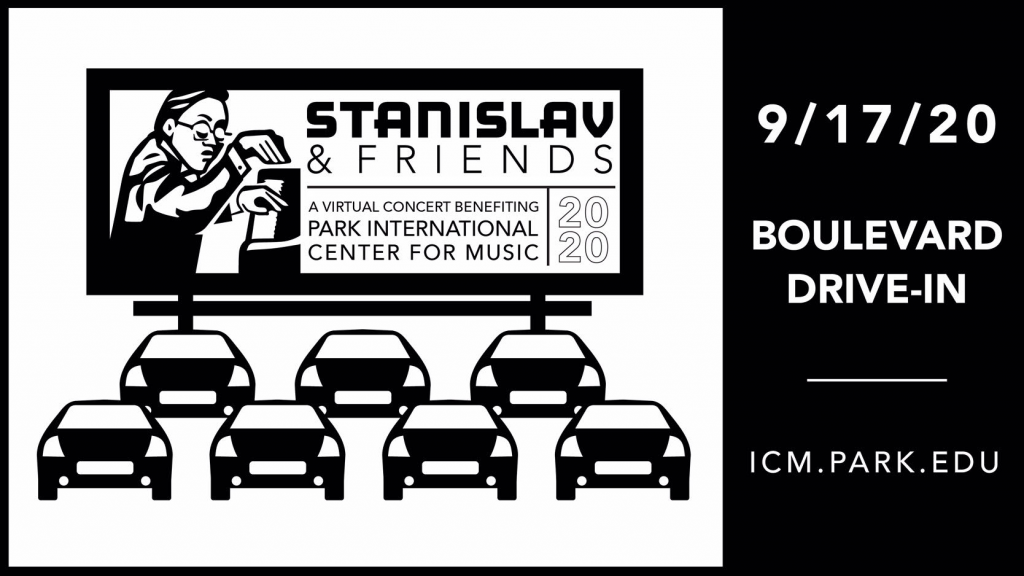 Forget homebound virtual concerts. The team at Park ICM just upped the ante by selecting the legendary Boulevard Drive-In Theatre to showcase the college’s world-class entertainment on the theater’s mammoth screen on September 17th. “We’re all sick of sitting in our living room watching another TV show,” says Hickok. “So we’re taking the performances to the big screen—a drive-in, no less—which is something most of us haven’t done in decades.”

Given that it’s Park ICM’s opening concert of the season and biggest annual fundraiser, the venue makes perfect sense. “You can easily socially distance. Plus, it adds a little spectacle and Americana to it, so we thought, why not?” she says. “When we asked Boulevard their thoughts on drive-in classical music, they said, ‘We’re in!'”

A Family Affair (and Bring the Dog, Too!)
With space for more than 700 cars, the upcoming 2020 “Stanislav and Friends” concert already has garnered plenty of buzz. “People are starved for 1) something to do and 2) the arts,” says Hickok. And the chance to bring the whole family out for a night of Milk Duds and Mozart does offer a certain allure. “We’re recording performances throughout Kansas City—in unexpected places to ensure the show is visually exciting,” she says. “It’s definitely a different exposure to classical music.”

The event will raise some much-needed funds for Park’s International Center for Music—a music program that’s quietly producing some of the best classical musicians in the world. Created and spearheaded by the founder of Park ICM and director of the piano studio Stanislav Ioudenitch, this intensive training program is one-of-a-kind in the United States.

Cast of Characters
This year’s performances include a talented cast of characters—many of whom are Ioudenitch’s protégés. Some—such as revered pianist (and Instagram fan favorite) Behzod Abduraimov—are becoming globally recognized names. “Behzod normally travels the world all year long playing alongside international orchestras,” says Hickok. “But this year—because of the pandemic—he’s been staying here in Kansas City and practicing. The fact he makes KC home—what more could you ask for?” Abduraimov recently released a new album featuring the music of Rachmaninoff which—mic drop!—he recorded using Rachmaninoff’s personal piano in Lucerne, Switzerland.

September’s benefit concert will highlight Ioudenitch’s friends and colleagues, such as cellist Dilshod Narzillaev and violinist Maria Ioudenitch, Ioudenitch’s talented daughter. Pianist Kenny Broberg—who is getting his master’s at Park University—is also on the roster of performers. Broberg is an acclaimed pianist in his own right and last year won the bronze medal in the Olympics of musical competitions in the world—the XVI International Tchaikovsky Competition in Moscow. “Out of all the music schools in the United States, he was the only American out of seven finalists,” says Hickok.

Gourmet Concessions? Yes, Please.
As with any good drive-in theater experience, concessions will be a priority. But for benefactors of the event, Hickok reveals, “they will get the VIP treatment—including premier parking and a gourmet VIP concession box that is top secret.” General admission tickets, meanwhile, are a steal. “The big news? We are going to offer the drive-in experience to the general public,” she says. “$50 for two guests in one car or $100 for as many people as you can cram in your vehicle. A classic-music clown car, if you will,” Hickok says with a chuckle.

And the grand finale promises to be quite a treat. “We’ve saved the best for last. Imagine an eight-hand, four-pianist, two-piano finale!” says Hickok. “With two people furiously playing on one piano, it gives a whole new meaning to the term dueling pianos.”

This event is sure to sell out. So if you’re interested in purchasing tickets, we’d suggest ordering them soon. Don’t miss the second annual “Stanislav and Friends” on September 17th at the Boulevard Drive-In Theatre.

Five Things You Don’t Know About Me: Pianist Kenny Broberg

IN Conversation with Kenny Broberg