Now that theatres across the globe are temporarily dark, one of William Shakespeare’s most celebrated lines resonates more than ever:

“All the world’s a stage, and all the men and women merely players …” 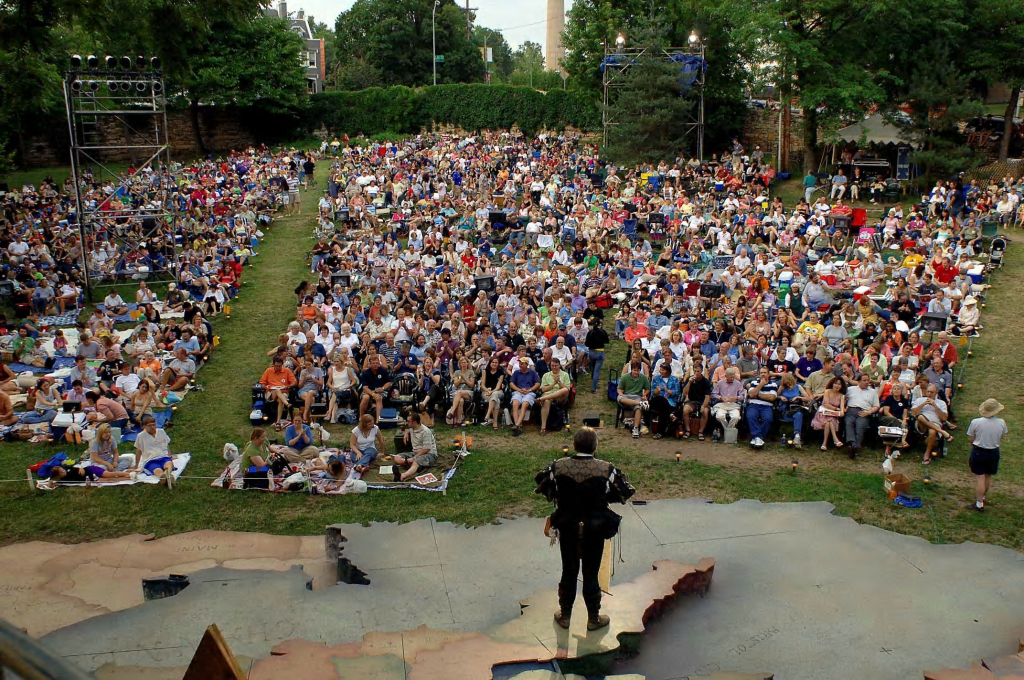 This year marks an unanticipated milestone for Kansas City’s beloved Heart of America Shakespeare Festival: the first postponement in the festival’s history. Yet for Sidonie Garrett, Executive Artist Director, the show must go on. Garrett says she and fellow theatre leaders are all grappling with the same questions. “We’re talking more than we ever have to each other,” she says. “We’re trying to work through various scenarios: how are we going to move forward? What do you do if your entire programmatic output centers on people gathering?”

Just as businesses in a variety of industries have embraced video-conferencing platforms like Zoom to stay connected, Garrett has shifted some of the festival’s programming to a virtual environment.

One example? The festival’s annual summer camps, a 24-year tradition and an integral part of an overarching mission to make the arts—and more specifically, theatre—as accessible as possible. Camps kick off on June 1 and include sessions for several age groups: 5-7, 8-11, 12-14 and 15-18. Pivoting to virtual events has been an adjustment, Garrett says, but the format does offer some advantages. “One of the exciting things about virtual camps is that if your kid has a friend they don’t get to see, or a cousin in Nebraska, they could all sign up for camp and spend time together in a virtual way,” she says.

Camp enrollment is open now on the Heart of America Shakespeare Festival’s website, and Garrett anticipates classes, presentations and events in the fall.

Of course, there’s still a glaring omission: the festival’s signature summer production, during which Kansas City’s Southmoreland Park is filled with theatregoers toting picnic meals and beverage coolers, ready for a performance under the stars.

Garrett purposefully selected Shakespeare’s The Tempest as this year’s performance. Now, the event will be rescheduled for summer 2021, and Garrett says the play’s major themes will resonate just as much in the year to come. “When I chose The Tempest for this year, I really felt like, given the feel of the general landscape, I wanted to do a play about magic, hope, love, human connection and redemption,” she says. “I wanted to do something that would bring people together, give us some escapism and hope. That will hold true next summer, I think, after what we’ve been collectively experiencing.”

That collective experience is already such a critical component of live theatre, and something that Garrett hopes will keep people connected in the coming months, even when they’re not able to gather for events like the festival. “That’s what theatre does—it touches elements of our own lives and makes us laugh or cry or think or all of the above,” she mentions. “If you’re a person who has experienced that and it’s part of your ongoing life, you miss it—feeling the energy of other people, sitting in the dark, engaged in a story together. It’s that visceral response, community laughter—don’t we all miss that?”

The silver lining of the current challenges? There are still opportunities for people to come together. In this case, it’s donating to the Heart of America Shakespeare Festival, which will help ensure both the continuity and accessibility of this hometown treasure. “We’re different than anything else in town,” Garrett says. “We’re a professional theatre company that performs for donations only. We’re in a park and you get to sit on the grass, share food with your neighbors—the whole experience is a community event. Our goal is that no one is left outside who wants to come in. We’ve eliminated the barrier of buying a ticket, so you can simply walk into the park, sit on the ground and watch a play.”

That accessibility is the result of another community principle that the festival so thoroughly embodies: people giving what they can so that others can participate. “Every year, our community provides this for themselves and for other people,” Garrett says.She hopes that this year won’t be any different. Donations will continue to support the festival’s operations, which keep the organization running all year long and fund other programming, like summer camps. Scholarships are available for kids who want to attend camp but can’t afford it.

With so many organizations and businesses in need right now, Garrett knows it can be a challenge to decide how to best allocate support. She proposes this: for theatregoers planning to attend this year’s festival, donate what you would have given at the gate and spent on tickets and refreshments. That way, you’ll help protect the continuity of the festival and know that you played a role (no pun intended!) in sustaining a place where “people learn and grow emotionally and collectively share,” Garrett says.

Don’t forget to save the date for The Tempest, coming to Southmoreland Park in summer 2021. And remember, this, too, shall pass. “We will be able to come together again; it’s just a matter of when and how,” Garrett says. “For now, we’re simply taking an intermission.”