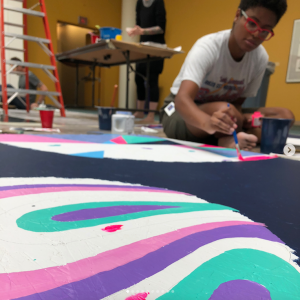 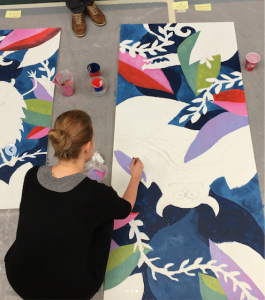 When artistic people get together to use their powers for good, magic usually follows suit. When a whole company of artistic folks do it, there’s no telling what can happen. Such is the case at Hallmark, where an initiative called #my5days gives creative employees a unique opportunity to shine. “Through #my5days, all Hallmark employees in creative roles are given five days each year to step away from their day-to-day to renew, explore, learn, and think differently,” says Cora Storbeck, community involvement director at Hallmark. “Employees can choose to use this time for self-exploration, internal workshops, or external workshops.” 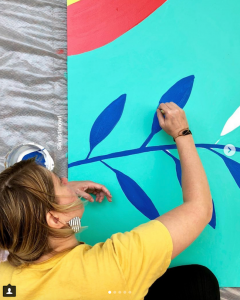 For 12 local Hallmark artists, the goal was to help splash some colorful splendor through Kansas City’s urban core via the Urban Canvas project—a neighborhood beautification and safety project – that the group learned about from their friends at Greater Kansas City LISC. “Kansas City has hundreds of vacant and abandoned homes that bring down the vitality, safety, and prosperity of our city and neighborhoods,” says Storbeck. “Participants in the Urban Canvas project paint art and/or inspiring messages on wooden panels that will be placed on the windows and doors of five abandoned homes owned by the Kansas City Land Bank. These panels will not only secure the homes from intruders and squatters, but also use art to beautify these once-loved homes.” Matt Kesler, senior artist at Hallmark, helped lead the charge to get the creative ball rolling. 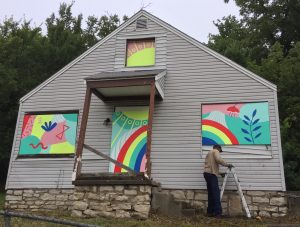 Once the five homes were identified, the team took dimensions of the boards that would cover the windows and doors on the front of houses. The Home Depot in Midtown generously donated twelve pieces of plywood, ten gallons of paint, brushes and other supplies. “Each team of artists came up with their own design and color palette,” says Storbeck “Each home looks different, but within a home the designs hang together across the doors and windows.” 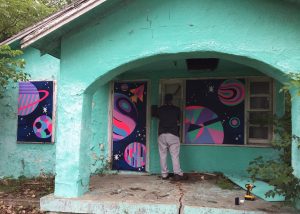 According to Storbeck, the five homes that were chosen were in desperate need of some love and are “highly visible and located on commercial corridors and high-traffic streets like Prospect Avenue and Linwood Boulevard.” Land Bank helped install the panels and the creative team at Hallmark plans on scheduling a homes tour to see their handiwork as well as interact with the neighborhoods involved. “The panels will be a visible demonstration to the community and those who pass by that care has been put in to these houses and will encourage people to purchase and rehab these homes.” 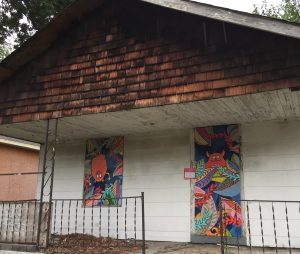 From urban blight to urban bright, indeed. “Caring about our community is a big part of Hallmark’s culture and DNA,” says Storbeck.

In a Dither and Need To Mail A Card? Hallmark Says Do It Via Your Smart Phone!