Whether it’s a painting, photograph, or hand-painted ceramic tchotchke from your Aunt Gladys, most everyone has one piece of art that truly resonates with them. We’re asking, “What’s your favorite piece of art?”

Next up is Kansas City Art Institute president Tony Jones. Born in Great Britain, Jones is an internationally known arts administrator, broadcaster, educator (with six honorary doctorates, no less), and historian, specializing in the art, design, and architecture of the Modern Age.

Out of all the work in his esteemed collection, Jones picked a painting called Hither & Thither (acrylic on canvas, 2002, 5’x4’). “It’s by my old friend, the English painter Doug Kemp. It’s part of a long and complex series of paintings and prints that illustrate the story of a shifting cast of characters caught up in a tangle of relationships and incidents, with cities and landscapes real and imagined,” says Jones. “It’s partly drawn from the autobiography of his life.” 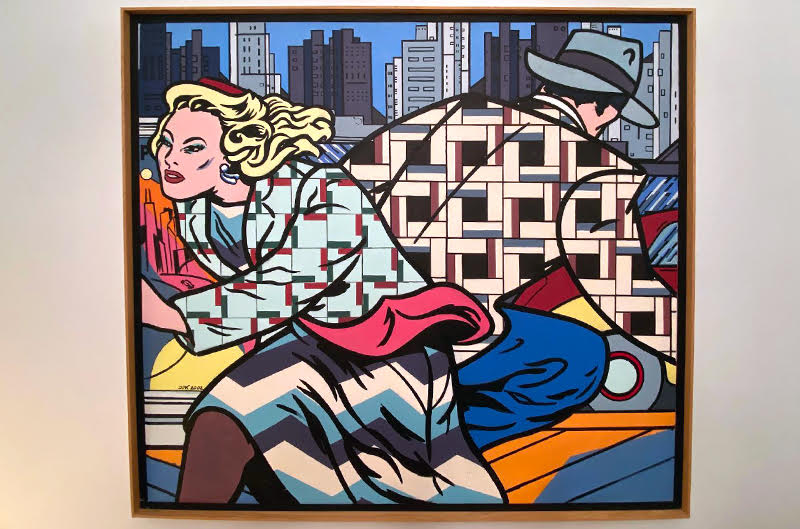 What’s the appeal/allure of the artwork to you?
“Imagine finding a book that has all the pages blank—except one. And that single page drops you into the middle of a fascinating story with colorful characters and mysterious overtones—but you don’t know what happened before, or what will happen after that solo page. This painting is like that page. I’ve had Hither & Thither since it was painted and it’s as magnetic now as when first seen.”

Is there a backstory to the artwork?
“I know some of the story, but nowhere near all of it. I’ve seen many snapshots from the tale, have come to know these people as they reappear in the story, and the artist has often shared snippets of the background to his works. So apart from the visual drama of this specific painting, it relates to many others.”

What catches your eye about the work?
“It’s a bold and baroque, startling V-shaped composition, with the dynamic whirl of the two stylized figures going in different directions and covered with flat-pattern abstractions. My question—where/why is the dashing blonde running away from the hatted man and why so urgently?

It’s in a strong, high color range, but it’s rich in references to black-and-white film noir of the 40s—along with nods to 30s Art Deco, 50s textiles, Egyptian tomb-paintings, Berlin in the 30s, British railway posters, gangsters of London’s East End, old BBC programs, and the Kemp’s visits to Chicago and Miami.

Although it’s a freeze-frame, it’s packed with the city-life energy of these characters escaping toward the outer edges of the frame—and on to the empty pages of that mysterious book.”

Art for the Home: Color Me Happy